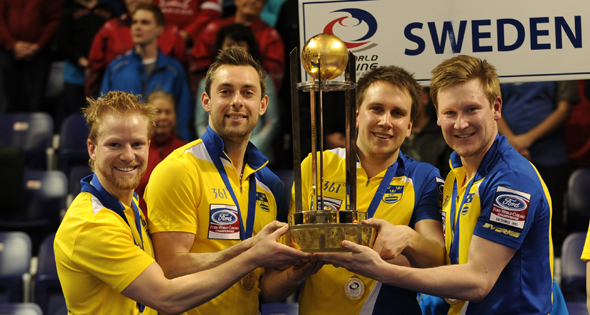 Not only did it end Canada’s gold-medal streak at three, it also marked the first time a Swedish team beat Canada in a world final played in this country since Kjell Oscarius did it in 1973, beating Harvey Mazinke in Regina. And more impressively, it marked the first time that one team has won both the European and World men’s gold medals in the same season; Edin’s team claimed the European championship in their home town of Karlstad in December. And to cap a wonderful trip to Victoria, Edin also was named the winner of the Collie Campbell Award for sportsmanship, as voted by the players. “It’s been a wonderful week,” said Edin, who qualified for the final by beating Scotland’s David Murdoch in the Page playoff one-two game on Friday. “The final we played here, it was almost perfect. We executed our plan perfectly, and I’m so proud of my team.” It’s Sweden’s first world championship gold medal since current national coach Peja Lindholm prevailed in 2004 at Gävle, Sweden. 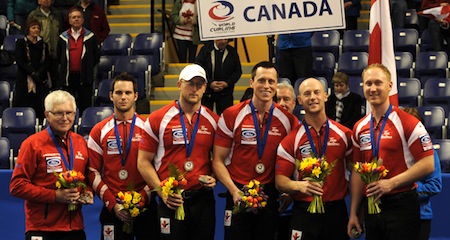 It was a third straight trip to the podium for Edin’s team, which won bronze at the past two world championships. But there was no stopping Sweden this time around. The Swedes struck early, getting a wonderful hit-and-roll from Kraupp to set up Edin’s hit for a first-end deuce. Jacobs was forced to one in the second, but had a chance to set up a steal in the third, only to be just a little wide on a tap-and-roll attempt to sit frozen on the button. Edin was able to make a wide outturn draw-tap to move a Canadian stone just enough to score two and take a 4-1 lead. Canada took two back in the fourth and was able to force the Swedes to one in the fifth. But any potential comeback was snuffed out in the sixth when Jacobs had a double-takeout to score a game-tying two, but was narrow and left Sweden with a stolen point and a 6-3 lead. Jacobs was again forced to one in the seventh and Sweden added more insurance with two in the eighth. “I’m proud of the guys,” said Jacobs, who along with third Ryan Fry, second E.J. Harnden, lead Ryan Harnden, alternate Matt Dumontelle and coach Tom Coulterman settled for silver medals. “This was such an amazing experience for us. We were just on the wrong side of the inch in that game, and that happens sometimes. You know what? We’re going to hold our heads high. We fought as hard as we could. Congratulations to Sweden — they played awesome.” It was Sweden’s sixth gold medal — second only to the 34 won by Canada — and the country’s 19th overall. httpvh://www.youtube.com/watch?v=WRN_gr7QPtQ “We played in the last Olympics, and our main goal was to get to the next Olympics and maybe grab a medal there,” said Edin. “After the (2010) Olympics, we finished fourth there and we set up a goal to win the Europeans and worlds. Three years later, we’ve won both and it feels amazing. The plan was there all the way. We struggled a little this season, but putting it all together in this world championship feels amazing.” For Canada, meanwhile, it was a 49th medal overall in the 55-year history of the event, tops in that category. “What a season; we did all we could, you know,” said Jacobs, who has one event remaining this season to secure enough points to qualify directly for the Tim Hortons Roar of the Rings Canadian Curling Trials beginning Dec. 1 in Winnipeg. “Silver-medallists at the worlds, we’re pretty young and this is a first-year team. Who knows? Cross our fingers, maybe one day we’ll get a second chance at this. Just overall, an awesome team.” Next year’s world men’s championship will be played in Beijing. The 2014 Ford World Women’s Curling Championship is scheduled for March 15 to 23 in Saint John, N.B. To purchase tickets, go to: www.curling.ca/2014worlds/.   [flickr-gallery mode=”tag” tags=”2013fordmensgold” tag_mode=”all”]