A fond farewell to the 2013 Ford Worlds

With mixed emotions, Victoria bid farewell to the curling world! There were joy and satisfaction for the more than 500 volunteers who gave their heart and soul to the competitors and visitors, as well as a touch of sadness that this wonderful event is over. 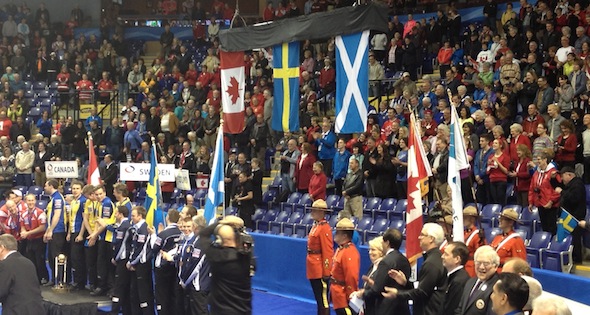 The flags of the three podium teams are raised on Sunday during the closing ceremonies of the 2013 Ford World Men’s Curling Championship, presented by Booster Juice. (Photos, courtesy Elaine Dagg-Jackson)

When we began to plan for the 2013 Ford Men’s World Curling Championship, presented by Booster Juice, we all hoped that we could host an event that would showcase our community and our people, and provide a meaningful experience for all those involved. Mission accomplished, Victoria! The inuksuk welcomed the world and served their intended purpose: to “show the way” to an event where the shotmaking of the 12 participating teams dazzled us for nine days. They stood proudly as the symbol of our west coast paradise and our world-class competition. They brought a smile to our faces. For my family, this event was meaningful, rewarding and a whole lot of fun! Being involved in so many ways, we got to experience the event from every angle. My uncle Keith Dagg was the Co-Chair along with our good friend Chris Atchison, so we knew what was going on behind the scenes at the highest level. As volunteers we were able to mingle with the spectators, competitors and other volunteers making new friends and reconnecting with old ones. And as spectators, we witnessed all those amazing performances first hand, right up close. Many fantastic memories will mark this world championship, but a few were exceptionally special. Early in the event, former champions from B.C. were recognized, and along with them were members of my father Lyall Dagg’s 1964 World Championship team. My adult children were able to meet Leo Hebert and Fred Britton, close friends and teammates of their grandfather, whom they never met. 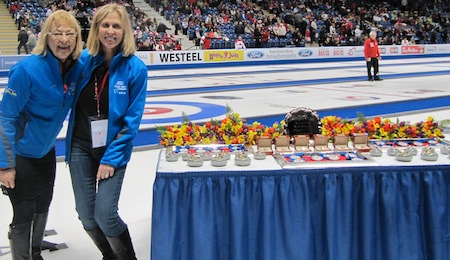 Elaine Dagg-Jackson and her sister Jenny show off the awards table prior to the gold-medal game.

Another special moment occurred when a man touched me on the shoulder and asked me if I was Lyall Dagg’s daughter. When I confirmed that I was, he went on to tell me that he was from the United States and had played against my father and about what a special person he thought he was. That may not seem significant except for the fact that my father passed away at the age of 45 in 1975. Thirty-eight years later someone I have never met passed on a kind word that almost brought me to tears. My favourite moment of every championship is when the athletes are on the podium and the flags are raised. This year we saw the flag of Sweden take its well-deserved place at the top rung, followed by Canada and Scotland. It was a perfect picture and a perfect moment, a hard fought week down to one final image. Sunday night at the banquet, the World Curling Federation recognized two legendary curling personalities — Ron Northcott and Don Duguid, both winning the Freytag award and induction into the World Curling Hall of Fame, and both were so very worthy of that recognition. In his moving speech, Don Duguid told the competitors of the 2013 Ford World Curling Championship that the sport was now in their hands and they now had the responsibility of showing the world what curling was all about. He described how the glory of curling had passed from legend to legend over the generations, and that the fine young men in the room would be the future legends. He closed by recognizing the amazing career of Peja Lindholm, who had made a mark as a competitor and now as coach at the highest level. For me Don’s words brought the event to a perfect close — a legend of curling summing up a spectacular week by drawing attention to what it was really all about, the joy of competing, the honour of representing your country and the responsibility to pass on your knowledge and experience. So to all those who joined us in Victoria for this 2013 Ford World Curling Championship, thank you for helping to make it special! We enjoyed hosting you and we hope you will return one day! (Canadian Curling Association national women’s team coach and longtime Victoria resident Elaine Dagg-Jackson wrote blogs from the 2013 Ford World Men’s Curling Championship, presented by Booster Juice)