Canada’s path to the playoffs at the 2013 World Mixed Doubles Curling Championship got a little more complicated on Sunday night at the Grant-Harvey Centre in Fredericton, N.B. 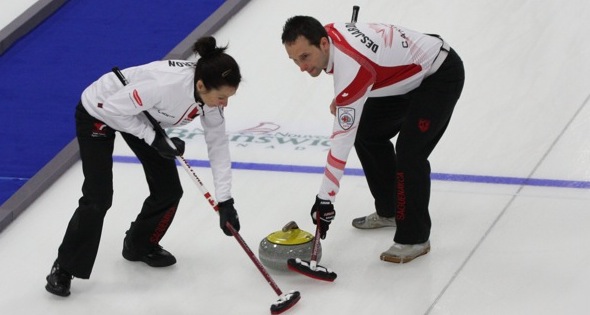 The Canadian pairing of Robert Desjardins and Isabelle Néron of Saguenay, Que., fell 7-6 to Spain’s Sergio Vez and Irantzu Garcia in round-robin play. That, combined with a 12-5 loss earlier in the day to defending world champs Martin Rios and Nadine Lehmann of Switzerland, left Canada with a 1-2 record in their nine-team pool, from which only the top two finishers are guaranteed playoff positions. Canada was down by five early on when the Spaniards (2-1) stole three in the first end when Néron wrecked on a guard on a hit attempt, then added single-point steals the next two ends. Canada fought back to tie it 6-6 after seven ends, getting a steal of three in the seventh when Garcia was light on her draw. In the eighth, Néron made a wonderful double raise to sit shot-rock biting the button. But Garcia followed with a difficult draw through a narrow port to backing to get a bigger piece of the button and the victory. “Nothing went our way, we couldn’t buy a shot,” said Desjardins. “And when we finally do get an end set up, we completely destroy it, or the opponents just don’t miss. They did it in the seventh to get us back in it, but she made a great shot on her last one.” The Canadians will look to get back to the .500 mark on Monday when they take on Romania’s Valentin Anghelinei and Ana-Maria Saracu (0-2) at 4 p.m. (all times Atlantic). “Don’t be worried — that’s mixed doubles. That’s the game,” said Néron. “The Spanish guy made a lot of great shots and they deserved to win. They played better than us. We’ll come out and play better tomorrow.” The 2013 World Mixed Doubles Championship is being held in conjunction with the 2013 World Seniors Curling Championships in Fredericton, and all three Canadian teams will see action on Monday. Cathy King’s women’s team from St. Albert, Alta., will open the day seeking a third straight win to open to the senior women’s competition. King,  third Carolyn Morris, second Lesley McEwen, lead Doreen Gares, alternate Christine Jurgenson and coach Bill Tschirhart will play Japan’s Mikiko Tsuchiya (1-1) at 8:30 a.m. (all times Atlantic). After the Canada-Romania mixed doubles game, Rob Armitage’s senior men’s team from Red Deer, Alta., (third Keith Glover, second Randy Ponich, lead Wilf Edgar, alternate Lyle Treiber and coach Bill Tschirhart) faces a showdown against expat Canadian Hugh Millikin and his Australian team in a battle of 3-0 squads. For live scores and standings from the World Mixed Doubles Championship, go to: www.wmdcc2013.curlingevents.com/. Selected games from the World Mixed Doubles can be watched online at: www.youtube.com/WorldCurlingTV. For live scores and standings from the World Seniors Championship, go to: wscc2013.curlingevents.com/.