Rob Armitage and Team Canada wanted a close game at the World Seniors Curling Championships in Fredericton, N.B. They got it against a familiar face on Monday night at the Grant-Harvey Centre. 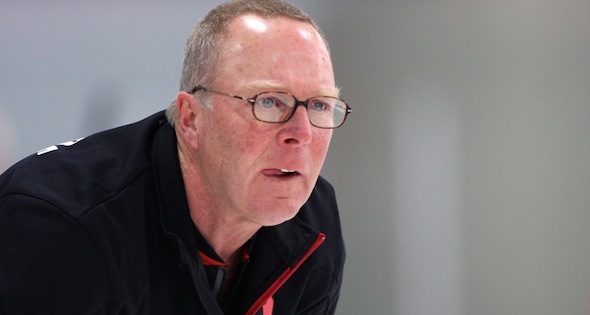 Team Canada’s Rob Armitage checks out the situation during his team’s win over Australia on Monday night. (Photo, WCF/Richard Gray)

Armitage’s Red Deer, Alta. squad — third Keith Glover, second Randy Ponich, lead Wilf Edgar, alternate Lyle Treiber and coach Bill Tschirhart — won a battle of unbeatens in the senior men’s competition, beating former Canadian mixed champ Hugh Millikin and Team Australia 6-4. With the win, Canada improved to 4-0, behind only Karl Nordlund (5-0) of Sweden in the 10-team A Pool. The Aussies, meanwhile, dropped to 4-1. “That was a big win for us,” said Armitage, who was scored at a blazing 91 per cent — the third time in four games he’s finished at above 90. “Two losses might be too many in this field, and we still have two or three tough games left, so getting by that one was absolutely huge.” After three relatively easy victories, Canada was pushed hard by an Australian team that also featured third Wyatt Buck, who played second for Saskatchewan’s Randy Woytowich at the 1993 Brier in Ottawa. Armitage made a wonderful draw around a wide corner guard in the second end to set up a deuce, and then made an even better draw to bite a piece of the button in the fourth end while looking at two Australian counters. Australia, though, took the lead with a sixth-end deuce thanks to a Millikin double takeout on his first rock. But a precision tap-and-roll in the seventh from Glover set the table for Armitage to make a draw to backing in the four-foot for a game-turning three to give Canada the two-point margin going into the final end. “That’s one of those things where you want to be patient, but it’s an eight-end game,” said Armitage. “You don’t have the hammer (in the first end), but we hold them to one, we get two, we hold them to one again, but they get their deuce in six and they’re making everything. Oh, yeah, they’re playing well. We were trying to force them into a bit of a curling game but they’re answering the bell at every turn. But the patience paid off. And that gives you more confidence to be patient the next time.” The Canadian men take on Russia’s Sergey Korolenko (0-4) on Tuesday at 7 p.m. Earlier in the day, Cathy King’s Canadian women’s team from St. Albert, Alta., improved to 3-0 with an 11-3 victory over Japan’s Mikiko Tsuchiya. King and her teammates — rhird Carolyn Morris, second Lesley McEwan, lead Doreen Gares, alternate Christine Jurgenson (Tschirhart is coaching both Canadian senior teams) — return to action on Tuesday when they take on New Zealand’s Liz Matthews (1-1) at noon (all times Atlantic). And in mixed doubles play, the Canadian duo of Robert Desjardins and Isabelle Néron of Saguenay, Que., bounced back from a two-loss Sunday with a 12-3 win over Romania’s Valentin Anghelinei and Ana-Maria Saracu. That left Team Canada with a 2-2 record heading into a game on Tuesday at 9 p.m. against Hungary’s Zsolt Kiss and Dorottya Palancsa (2-1). For live scores and standings from the World Mixed Doubles Championship, go to: www.wmdcc2013.curlingevents.com/. Selected games from the World Mixed Doubles can be watched online at: www.youtube.com/WorldCurlingTV. For live scores and standings from the World Seniors Championship, go to: wscc2013.curlingevents.com/.