Rob Armitage’s Canadian men’s team is on the verge of nailing down a playoff spot at the 2013 World Seniors Curling Championships in Fredericton, N.B. 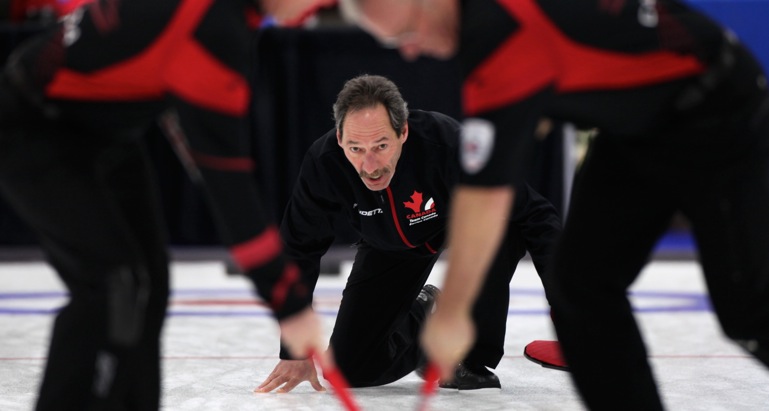 Armitage and his team from Red Deer, Alta. — third Keith Glover, second Randy Ponich, lead Wilf Edgar, alternate Lyle Treiber and coach Bill Tschirhart — racked up their sixth straight victory on Wednesday night at the Grant-Harvey centre, doubling Denmark’s Bent Juul Kristoffersen 6-3. With the victory, Canada improved to 6-0, good enough for second place in its 10-team round-robin pool, behind only the 8-0 Sweden squad skipped by Karl Nordlund. The two unbeaten teams will go head to head on Thursday at noon (all times Atlantic). It will be Sweden’s final round-robin game, so a Swedish victory would lock up first place and last-rock advantage in Saturday’s 8 a.m. semifinals against the second-place team from the other pool (the first-place team in the other pool plays the second-place finisher in Canada’s pool). Canada, meanwhile, has two round-robin games remaining on Friday, against Wim Neeleman of the Netherlands (3-4) at 8:30 a.m. and Gert Messing of the United States (2-4) at 3:30 p.m. A victory in any of Canada’s three remaining games would lock up a playoff spot. “I would rather be in first place,” said Edgar. “I don’t want to go in the playoffs in second place. Let’s keep the momentum and don’t give anybody a chance. Keep winning, don’t let them get any rocks in play, and next time you play them, probably they remember that.” Wednesday’s game against the Danes (5-3) was another example of that. Canada gave up a stolen point in the first, but played air-tight defence the rest of the way, and jumped on Danish miscues to score deuces in the second, fourth and seventh ends, all on draws by Armitage. “That seems to be the key,” said Edgar. “We’re keeping things fairly open because we can hit and draw as well as anybody here. We’re just trying to get ahead and keep things clean.” Meanwhile, Cathy King’s Canadian women’s team has the day off on Wednesday. King, third Carolyn Morris, second Lesley McEwan, lead Doreen Gares and alternate Christine Jurgenson (Tschirhart is coaching both senior Canadian teams) return to action on Thursday at 3:30 p.m. against Austria’s Veronika Huber (3-1). Canada will be looking for a 48th consecutive victory (note revised number) at the World Senior Women’s Championship. Meanwhile, in the World Mixed Doubles Championship, which is being held in conjunction with the World Seniors, the Canadian entry of Robert Desjardins and Isabelle Néron, along with coach Jim Waite, face a crucial pair of games on Thursday to close out the round-robin. The 3-3 Canadians play South Korea’s Jae-Sung Ahn and Hyun-Ho Synn (1-5) at noon, and then take on China’s Yanlong Ma and Xinna Yu (3-4) at 9 p.m. The top two teams from each of the three pools move on to the playoffs, along with the next best third-place team based on Last Shot Draw distance (the pre-game draw to the button to determine last rock in the first end). The other two third-place teams will play off for the for remaining quarter-final position. Canada trails reigning world champions Martin Rios and Nadine Lehmann of Switzerland (6-0), Hungary’s Zsolt Kiss and Dorottya Palancsa (5-1), Italy’s Alessio Gonin and Giorgia Ricca (4-2) and the Russians (4-3) in the standings, but holds tiebreaker advantages on the Russians and Italians thanks to round-robin victories against them. For live scores and standings from the World Mixed Doubles Championship, go to: www.wmdcc2013.curlingevents.com/. Selected games from the World Mixed Doubles can be watched online at: www.youtube.com/WorldCurlingTV. For live scores and standings from the World Seniors Championship, go to: wscc2013.curlingevents.com/.