OTTAWA — Thanks in part to this country hosting five major international curling events during the 2012-13 curling season, Canada has improved to second place on the 2013 Global Sports National Index, announced this week by Sportcal as part of its Global Sports Impact Project. 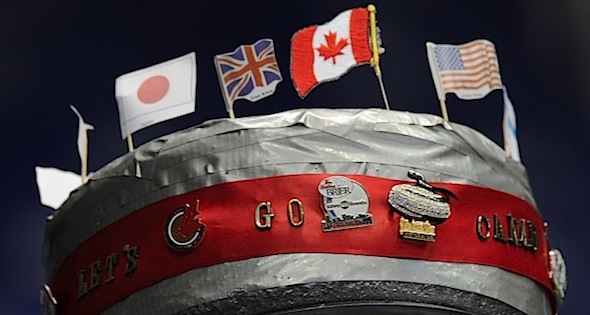 Sportcal, based in the United Kingdom, is considered one of the world’s most influential sources for international sports marketing research and information. The Global Sports Impact Project is the result of an intensive study by Sportcal based on more than 700 major international sports events between 2008 and 2019. The study is intended to show the impact and benefits of hosting international sports events. Canada improved three places in the rankings, placing second only to China, thanks largely to the curling events in addition to international swimming and hockey events. During the 2012-13 season, Canada played host to the World Financial Group Continental Cup, presented by Monsanto, in January in Penticton, B.C.; the Ford World Men’s  Curling Championship, presented by Booster Juice, in April in Victoria; and the World Mixed Doubles, World Senior Men’s and World Senior Women’s Curling Championships in Fredericton, N.B., in April. “Obviously, it’s important to continue to grow the sport of curling in our own backyard, but we also put a great deal of value on hosting world championships and raising the profile of Canada on the international stage,” said Canadian Curling Association Chief Executive Officer Greg Stremlaw, who also was recently elected to the Board of Directors for the  Canadian  Sport Tourism Alliance (CSTA). “Attracting international events to Canada doesn’t just pay off for the sport of curling. It’s also a huge benefit to business and the tourism industry.” The rankings were released during the 2013 Sportaccord Convention this week in St. Petersburg, Russia. “We’re thrilled with the results of (the) announcement,” said Rick Traer, the CSTA’s Chief Executive Officer. “It validates that the collective efforts of our federal, provincial, municipal and sport partners has created more hosting opportunities for communities across Canada. The economic, social  and sport  development benefits  of  hosting are well documented,  but  we still have much work to do achieve our goal as the world’s leading sport hosting nation.” Team Canada partners in attendance at the event include the Canadian Olympic Committee, Tourism Calgary, Tourism Saskatoon, Regina Regional Opportunities Agency, Tourism Moncton, Tourisme Montreal, Events Edmonton, Quebec City Tourism and Tourism Vancouver/PAVCO. For complete rankings, please visit www.canadiansporttourism.com.