The reigning champions will get a chance to defend their title in their home province at the 2014 Canadian Wheelchair Curling Championship, it was announced today by the Canadian Curling Association. 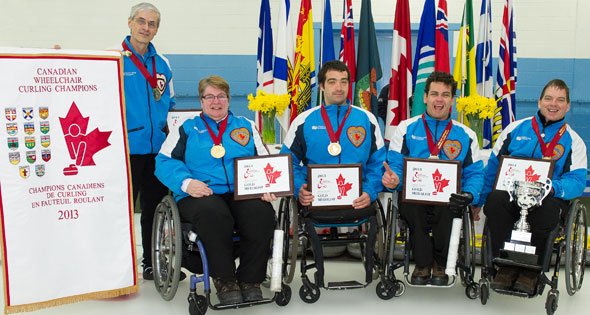 The 11th edition of the national wheelchair championship will be played April 28 to May 4, 2014, at Club de curling Boucherville in Boucherville, Que. At the 2013 championship at the RA Centre in Ottawa, Quebec’s Benoît Lessard and his team from Magog — Carl Marquis, Sébastien Boisvert, Johanne Daly and coach Germain Tremblay — claimed their province’s first Canadian wheelchair title. “Curling Quebec is excited that the country’s top wheelchair curlers will be in Boucherville for the Canadian championship,” said Curling Quebec executive-director Marco Ferraro. “It’s going to be a wonderful season of curling in our province, with both the Canadian wheelchair championship and the 2014 Scotties Tournament of Hearts in Montreal. Quebec’s curlers and curling fans couldn’t be happier.” The 2014 Canadian Wheelchair Championship will be organized and operated by Défi sportif AlterGo, a Quebec-based organization focused on raising awareness of sports for athletes with a disability. “We have an extensive background in running competitions for athletes with a disability, and we know there’s a passion for wheelchair curling in this country,” said Maxime Gagnon, the director for Défi sportif AlterGo. “We’re truly excited to be a part of this championship as it’s staged in Quebec for the first time. We’re confident that the curling community in Boucherville and around the province will embrace the 2014 Canadian Wheelchair Curling Championship and make it a big success.” The Canadian Wheelchair Curling Championship began in 2004 and has previously been won by Team Canada (skip Chris Daw) in 2004, 2005 and 2006; by British Columbia in 2007 (skip Darryl Neighbour), 2008 and 2009 (skip Jim Armstrong) and 2010 (skip Gary Cormack); by Manitoba (skip Chris Sobkowicz) in 2011; and by Saskatchewan (skip Darwin Bender) in 2012.