Around the House: 175 years of curling in Guelph

The glass may have been foggy for spectators, and there may have been a few ice bumps thanks to the humid, rainy weather, but that didn’t stop hundreds of curlers – and non-curlers – from congregating at the Guelph Curling Club on Saturday, September 21 to kick off the club’s 175th anniversary season. How did they get the party started? They spent the afternoon and early evening playing 175 ends of curling.

Curling has been part of the winter landscape in this region of Ontario since the 1830s. Scottish settlers in Guelph played on frozen rivers and millponds, organizing games between nearby towns such as Fergus, which celebrated its 175th anniversary in 2009, and Elora, which will celebrate 175 years in 2014. On September 21, Guelph CC’s eight sheets of ice and party room were teeming with curlers eager to help kick off the anniversary year. Teams and individuals had started signing up in August, when event organizer Gerry Sundwell put out the call for participants. Starting at noon, teams were piped on to the ice to begin the first draw. Curlers on each sheet played four ends, then moved into the party room to let the next 64 participants take over. With the emphasis on completing 175 ends rather than on competition, the scoreboards remained empty and curlers focus on having fun. Club members, friends and family, kids, non-curlers – everybody took a turn. 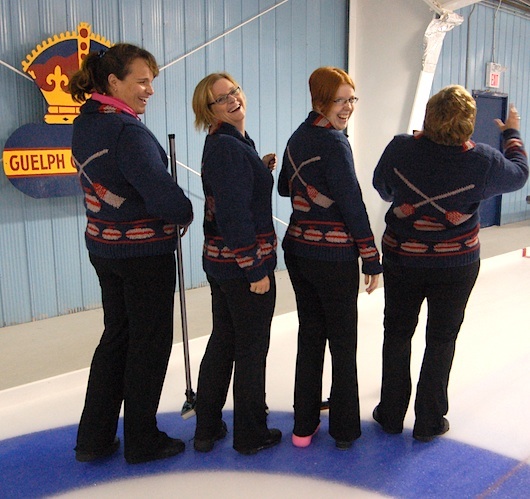 Some made special preparations for the event, including regular Wednesday Night Business Women’s foursome Patty Warner, Nancy Culham, Cheryl McLeod and Laurie Hutt, who spent the summer knitting and showed up for their draw attired in matching, retro curling sweaters. Others were stepping on the ice for the first time. “My sister said I had to come and help curl 175 ends,” says non-curler Brenda Gibson, who played in the second draw of the afternoon. “I fell over on the ice, but I got my rock into the blue.” Skip of the University of Guelph’s women’s curling team, Jaimee Gardner, brought a whole troop of university friends – almost all of them beginners – to try out the sport and do their bit for the club’s anniversary celebration. Other games included competitive teams from the Ontario Curling Tour, stick curlers, teams from the Friday Night Social league, kids from the club’s Little Rock and Junior programs, and a local high school curling team. In short, it was a chance for anyone to step on the ice and contribute to the 175 total, regardless of skill or experience. The 175th Anniversary organizing committee has planned several special events during the season, including an opening reception later in September, and a group photograph out on the ice. But on Saturday, a very successful 175 Ends of Curling got it all started. When the last teams came off the ice, the final end was announced with suitable commemoration – a huge cheer and a shower of balloons – and the party continued into the evening. “It was a great kick-off for our 175th celebration,” says Sundwall. 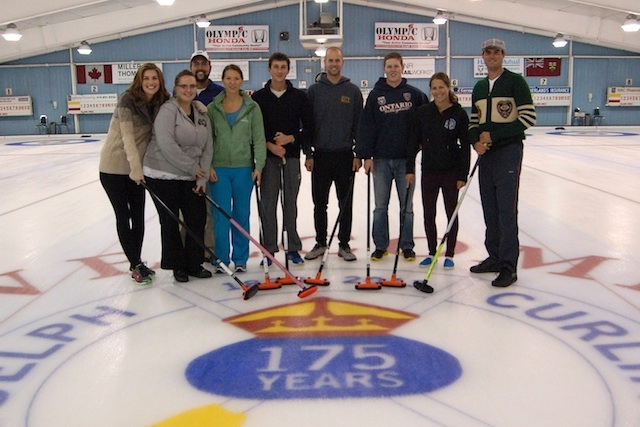