With the Olympic Games merely months away, it’s easy to be swept up in the hype of determining who will represent Canada in Sochi, Russia. 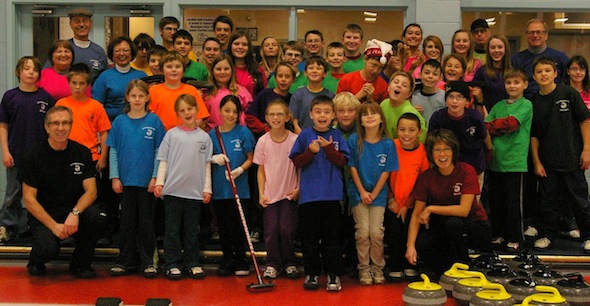 Darryl Horne, kneeling front left, and his wife Kate, kneeling, right, are constantly working with young curlers to get them hooked on the Roaring Game. (Photo, courtesy Darryl Horne)

Darryl Horne, coach of Team Heather Nedohin, will be vying for the Olympic spot at the Tim Hortons Roar of the Rings, presented by Monsanto, in Winnipeg. Even though Horne has his mind focused on one of the biggest prizes in the sport, he can’t help but think about where it all begins. After all, every Olympic dream begins somewhere. Horne grew up watching his dad curl at the Big Four Building on the Calgary Exhibition Grounds. The club featured a marvelling 48 sheets of ice, 24 on each level. “You don’t really recognize the significance of it because that’s what curling was at the time. That’s where my dad curled and it’s pretty amazing now when I think back on it,” Horne said of the size of what was once the largest curling club in the world. What’s even more astounding is that Horne remembers being out on the ice in a pair of cowboy boots. “It was pretty normal at the time that people would be using either leather soles or slip on sliders or that type of thing,” Horne said. “Cowboy boots weren’t the norm, but the footwear was pretty primitive at the time.” Horne dabbled in competitive curling, but didn’t believe he was “Brier material.” In the early ’80s, Horne’s playing career would be put to a halt after he had three surgeries on his back. But he would not fade away from the game. It wasn’t an option. Curling had already become a part of his life. Horne started coaching juniors so he could still be involved with the sport. Horne has recently gotten back into playing the sport, but rather than delivering the rock, he uses the stick. 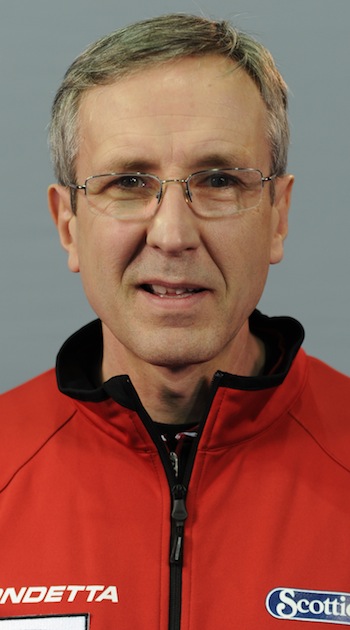 “I think it’s just a great game,” Horne said. “The small team dynamic is pretty unique. The sport itself can be played at so many different levels and it can be played for a lifetime. My dad is 87 and he’s still curling.” Even though curling can be played for a lifetime, Horne doesn’t think people should wait to get involved. He believes one of the most important aspects to the future of curling lies within the nation’s local curling clubs. “We need to make sure that we maintain or do whatever we can to sustain the participation in curling and I think that coaches at the grassroots level are really important to that,” he said. While coaching at the grassroots junior level, Horne met a 12-year-old boy by the name of Colin Davison. “When I asked him what his goal was he said ‘Jeez, you know, my goal is to win the world championship,’” Horne recalled. Six years later, Horne was the coach of the 1994 world junior curling champions. Davison won the title with teammates Kelly Mittelstadt, Scott Pfeifer and Sean Morris. “It’s kind of surreal because when you start with a goal like that, it’s an honourable goal,” Horne said. “None of us had that level of experience and so it was really a case of let’s just go out and work at improving our game year after year and see where it takes us.” Horne hopes that curling-stars-turned-coaches such as Earle Morris and Janet Arnott will be inspirations for others to start coaching. A good coach is necessary for the development of the game years down the road. “One of my fears is that it’s a hard game to play,” Horne said. “It’s a hard game for a kid to start out and get some success in. The more we can get people helping kids have success so they can have some fun while they’re on the ice the better.” Success doesn’t even mean winning games. Horne believes success can simply be throwing the rock down the ice and determining where it will rest, or maintaining good communication amongst the team. When Horne isn’t coaching Team Nedohin, he can be found teaching coaching clinics on the ice and in the classroom. “The reason why I do that is because I think it’s so important to have coaches on the ice for the kids,” he said. The names Homan, Martin, Howard and Jones are big in today’s curling community, but one day other names will replace them. Horne knows these new names will all get their starts at local curling clubs across the nation. That young curler with big hopes and aspirations needs to start somewhere. And they need a coach like Horne to guide them along the way.