Around the House: Four generations on the ice together

Curling teams come in many shapes and sizes, but how often does a team made up of four generations hit the ice together? For Ray Bullas and his daughter, granddaughter and great-granddaughter, it’s an annual tradition.

When Bullas retired and moved from Brampton, Ont., to Markdale, he knew nothing about curling. Of course, that didn’t last long. As a member of the local Masonic Lodge and the Eastern Star, he quickly connected with other members of the community, and very soon, a colleague had convinced him to give it a try at the local club. No surprise: Bullas was hooked. In April 1991, Bullas and his Masonic Lodge curling buddies decided to organize a bonspiel to support a local charity, and the event filled up quickly with teams of Eastern Star members with their families. “You coordinate your own teams to register for the bonspiel,” says Bullas. “Therefore I have curled with different rinks over the years. It is strictly a fun event, win, lose or draw!” Enter the other members of Bullas’s current team. After her father’s retirement, daughter Wendy Bodhaine heard about his curling exploits, and immediately thought: “Oh yeah, I remember trying that sport way back when I was in high school.” But as her kids grew up and she and her husband, Joe, had more free time, an opportunity presented itself. “I gave Joe a choice,” says Bodhaine. “We could either learn ballroom dancing or go curling. Without hesitation Joe responded, ‘Let’s try curling!’” They joined the Chinguacousy Curling Club and, with some friends, entered her father’s Eastern Star Bonspiel. “We were confident that we would truly be competition for my dad and the other seniors that attend the Eastern Star Bonspiel,” says Bodhaine. “Well, we were certainly put in our place as those seniors smoked us in every game.” In 2010, Bodhaine shared the curling bug by signing up her 12-year-old granddaughter, Kaylene Bodhaine, for a Little Rocks program at Chinguacousy. And that sparked the idea of taking a family team to the Eastern Star. She recruited daughter Jolene Costa, Kaylene’s mom, and asked her dad if he was willing to be part of a team with the kids. “Of course I said yes,” says Bullas. He played lead, Jolene (a non-curler) took second, and Kaylene skipped, with her grandmother, Wendy, playing third. The organizers were “ecstatic” to have “The Fearsome Foursome”, Bullas says, and didn’t mention the four-generation angle until the prizes were given out. “You should have seen the look on their faces when they found out,” says Bullas. “Of course they all congratulated us.” Since then, the team has competed in the Eastern Star bonspiel three times, and they’re gearing up for this year’s event as well. 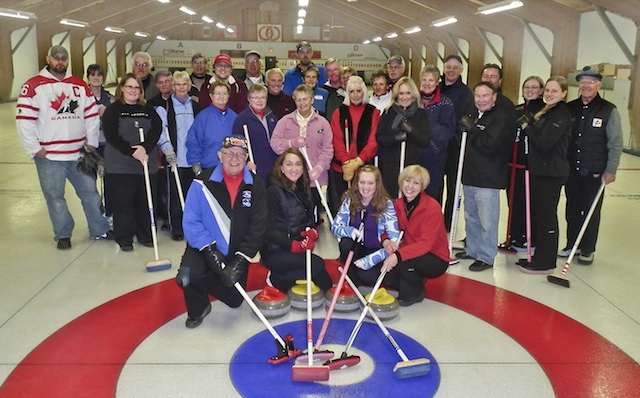 “It’s a great family day together packed with action, food, drinks, laughter and memories,” says Costa, Bullas’s granddaughter. “I look forward to this bonspiel every year.” “My highlight is to watch my dad gleam with pride,” says Bodhaine. “The joy that day brings to him is priceless. At the end of the day we always let Dad introduce the team and when he introduces his granddaughter as playing second and his great granddaughter as his skip, he is so proud his smile extends from ear to ear.” And for Kaylene Bodhaine, the youngest member of “The Fearsome Foursome”, who is already making her mark in provincial Bantam Girls competition – her team won zones last season – the chance to curl with her mother, grandmother and great-grandfather is more than special. “I love to curl and I really enjoy the bonspiel,” she says. “Not too many kids can say that they can play a sport with their great-grandpa.” Want to read more stories about curlers and curling clubs across the country? Check out more  Around the House here.