Capital One Road to the Roar underway Tuesday in Kitchener

Dreams of representing Canada at the 2014 Winter Olympics in Sochi, Russia, will remain alive for the four teams that prevail at the Capital One Road to the Roar Pre-Trials, presented by Monsanto, beginning Tuesday at the Kitchener Memorial Auditorium in Kitchener, Ont.

Cheryl Bernard of Calgary is hoping to make another trip to the Winter Olympics as Team Canada’s skip. (Photo, CCA/Michael Burns) 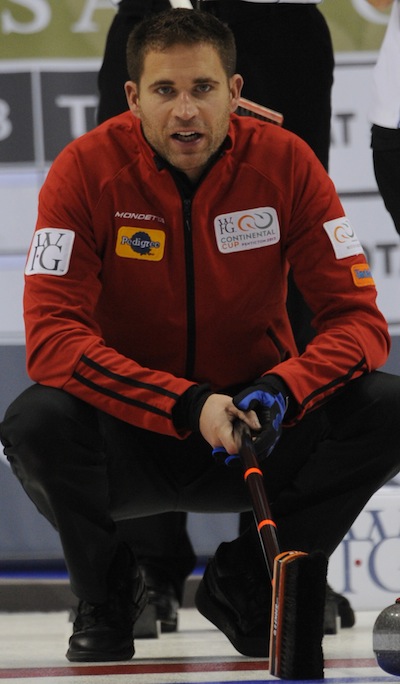 After winning Olympic gold in 2010 as Kevin Martin’s third, John Morris will skip his own team at the Capital One Road to the Roar. (Photo, CCA/Michael Burns)

The Capital One Road to the Roar will feature four skips who’ve won Olympic medals (John Morris won gold in 2010 at Vancouver playing third for Kevin Martin; Brad Gushue won gold in 2006 at Turin, Italy, throwing fourth stones for Russ Howard; Cheryl Bernard won silver in 2010 at Vancouver; and Shannon Kleibrink won bronze in 2006 at Turin). As well, there are six previous world curling champions: skip Kelly Scott and teammates third Jeanna Schraeder and second Sasha Carter won the world women’s title in 2007; Cathy Overton-Clapham, the third for Team Crystal Webster, won the 2008 world championship playing third for Jennifer Jones; Morris won the 2008 world title playing third for Martin; and Steve Bice, a front-end player for Team Greg Balsdon, won the 2007 world title as an alternate for Team Glenn Howard. For the complete lineup of the teams competing, click here for a downloadable roster sheet. For the event draws, click here for the men’s schedule; click here for the women’s schedule; and click here for the playoff schedule. It will be the second edition of the Road to the Roar Pre-Trials. The event was staged for the first time in 2009 at Prince George, B.C., and offered four berths for each gender into the 2009 Tim Hortons Roar of the Rings Canadian Curling Trials. TSN (RDS in French), the official broadcast partner of the Season of Champions, will provide exclusive coverage of the Capital One Road to the Roar on the closing weekend, with coverage at 9 a.m., 2 p.m. and 7 p.m. on both Saturday, Nov. 9, and Sunday, Nov. 10. Note that due to programming conflicts, the 2 p.m. draw on Sunday will be broadcast on CTV2, and also will be streamed live at TSN.ca. Tickets for the Capital One Road to the Roar are available at www.curling.ca/2013roadtotheroar-en/tickets/. Tickets for the Tim Hortons Roar of the Rings can be purchased at www.curling.ca/2013roaroftherings-en/tickets/.