Gushue rolls on at Capital One Road to the Roar

It wasn’t pretty, but it didn’t need to be — all that mattered was the ‘W’ for Brad Gushue and his team from St. John’s, N.L., Wednesday night at the Memorial Auditorium in Kitchener, Ont. 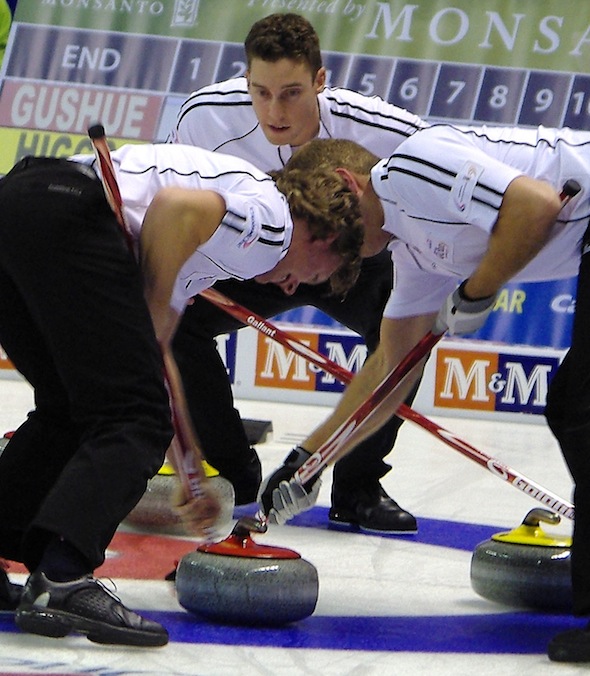 Gushue scored four in the second end, stole three in the fifth end and two more in the sixth en route to a sloppy 10-4 win over Jake Higgs of Glencoe, Ont., in one of the A-event semifinals of the 2013 Capital One Road to the Roar Pre-Trials, presented by Monsanto With the victory, Gushue, third Brett Gallant, second Adam Casey, lead Geoff Walker and coach Peter Gallant advance to Thursday’s A-Event final at 7 p.m. (all times Eastern) against John Morris’s team representing Kelowna and Vernon, B.C. At stake Thursday night will be a berth in Saturday afternoon’s Page playoff A-B game, which will have a spot in the 2013 Tim Hortons Roar of the Rings Canadian Curling Trials, presented by Monsanto, on the line. The Roar of the Rings is scheduled for Dec. 1-8 at the MTS Centre in Winnipeg. “It was a comedy of errors by both teams,” said Gushue, the 2006 Olympic gold-medallist in Turin, Italy. “Fortunately we made them try some pressure shots, and they didn’t pull through. But it was not a well-curled game by either team. “We won our two games; how we did it really doesn’t matter. I think the big thing for us is to forget about what happened tonight and worry about what’s going to happen tomorrow night because it’ll be a different sheet of ice and conditions.” Gushue will take on a Morris team that came back from giving up three in the first end to Greg Balsdon of Elgin, Ont., and put the game away with a deuce in the sixth end, a steal of one in the seventh and two more in the eighth. Even in a triple-knockout competition, Gushue is taking nothing for granted in the A-Event final. 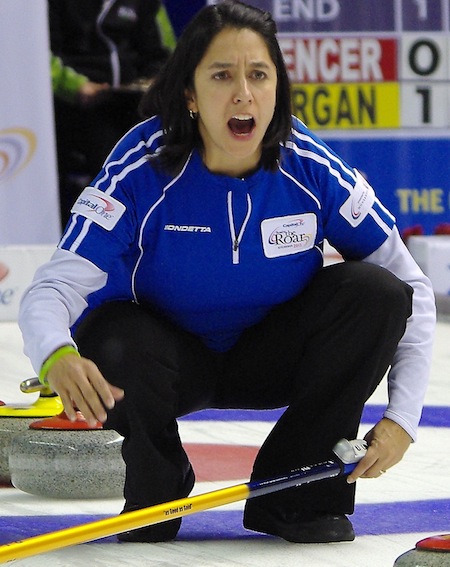 “If you win, you’re in great shape,” he said. “You get two cracks (at a Trials berth), and if you lose, you drop back into a B semi, so you’re still two games out and you’ll end up playing some good teams. So it’s a bit of a desperation game. Not do-or-die, but it’s such a big advantage and you want to play hard for it.” Balsdon and Higgs dropped to the B-Event with the losses. Meanwhile, the women’s A-event final Thursday at 2 p.m. will feature former world champion Kelly Scott of Kelowna taking on Renee Sonnenberg of Grande Prairie, Alta., with a berth in Saturday’s women’s A-B final on the line. Scott stole back-to-back points in the sixth and seventh ends to beat Krista McCarville of Thunder Bay, Ont., 6-5, while Sonnenberg broke open a tight 4-4 game through seven ends by scoring one in the eighth, stealing one in the ninth and three more in the 10th for a 9-4 win over Laura Crocker of Edmonton. In women’s B-event play, Tracy Horgan of Sudbury, Ont., was a 12-7 winner over Winnipeg’s Barb Spencer. Spencer had taken a 5-3 lead by scoring four in the fifth end, but Horgan immediately bounced back with four in the sixth and never trailed again. The Road to the Roar continues on Thursday with draws at 9 a.m., 2 p.m. and 7 p.m. Playoff draws will be broadcast on Saturday and Sunday by TSN/RDS, the official broadcast partner of the Season of Champions. Go to www.curling.ca/championships/television-and-webcast-schedule/ for the schedule. Live scoring, statistics and updated draw brackets are available at www.curling.ca/scoreboard/ The French version of this story will be available at www.curling.ca/2013roadtotheroar-fr/ as soon as possible. To purchase tickets to the 2013 Capital One Road to the Roar, presented by Monsanto, go to www.curling.ca/2013roadtotheroar-en/tickets/ For ticket information about the 2013 Tim Hortons Roar of the Rings, presented by Monsanto, go to www.curling.ca/2013roaroftherings-en/tickets/