Webster fights off elimination on the Road to the Roar

It was do or die for Calgary’s Crystal Webster on Thursday morning in Kitchener, Ont., but an 8-5 victory over Amber Holland of Regina means she lives to fight another day.

Twelve men’s and 12 women’s teams are battling it out at the Capital One Road to the Roar, presented by Monsanto, hoping to claim the final four spots in the Tim Hortons Roar of the Rings Canadian Curling Trials, presented by Monsanto, Dec. 1-8 at the MTS Centre in Winnipeg. Webster, backed up by third Cathy Overton-Clapham, second Geri-Lynn Ramsay, lead Sam Preston and coach Mark Johnson, took control from the start of the C-Event, loser-out game. She took a 4-2 lead in the fourth end when Holland’s soft tap-back attempt wrecked on a guard, leaving an open draw for two. Under pressure in the fifth, with every rock in play, Holland opted to throw her final stone to the boards rather than risk giving up a multiple score. A single in the ninth was too little too late for Holland and her team of Jolene Campbell, Dailene Sivertson, Brooklyn Lemon, alternate Candace Chisholm and coach Travis Brown. “We knew we had to play better today,” said Webster, referring to the team’s two previous losses. “We played miles better than we have the two previous games. We loved the ice today, so that made us feel so much better.” Webster credits Overton-Clapham for bringing some much-needed experience to a team that has yet to compete at the international level. “We thought, in an Olympic year, it would be great to bring that experience on to our team,” she said. “And we’re still learning from each other of course. We’ve tried to play as much as could leading up the Pre-Trials, but we are getting better, and I’m really enjoying having her experience next to me out there.” Four other women’s teams were on the ice Thursday morning in B-Event action. 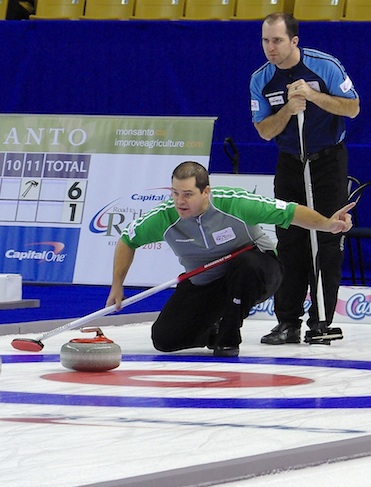 Edmonton’s Val Sweeting traded ends with Krista McCarville of Thunder Bay, Ont., in a close game that was decided on last rock. Tied 7-7 heading into the tenth, Sweeting needed only a single for the 8-7 win. In the only other B-Event women’s game, Tracy Horgan of Sudbury, Ont., gave up a steal in the first end, then never looked back, forcing Calgary’s Shannon Kleibrink to chase her in a 10-7 victory. Horgan applied the pressure relentlessly to the 2006 Olympic bronze-medallist, scoring three in the third and following up with a steal of three. In the fifth, Horgan’s precision double resulted in a two more points and an 8-3 lead. Kleibrink fought back with a steal of one in the ninth, but it wasn’t enough, and Horgan notched up another win. In the only men’s game of the morning draw, Steve Laycock broke it open with three points in the final end to earn a 6-3 B-Event win over Jake Higgs of Glencoe, Ont. Kleibrink, McCarville and Higgs now move to the C-Event and face elimination with one more loss. The Capital Road to the Roar continues on Thursday at 2 p.m. and 7 p.m. (all times EST). Playoff draws will be broadcast on Saturday and Sunday by TSN/RDS, the official broadcast partner of the Season of Champions. Go to https://www.curling.ca/championships/television-and-webcast-schedule/ for the schedule. Live scoring, statistics and updated draw brackets are available at https://www.curling.ca/scoreboard/ The French version of this story will be available at https://www.curling.ca/2013roadtotheroar-fr/ as soon as possible. To purchase tickets to the 2013 Capital One Road to the Roar, presented by Monsanto, go to https://www.curling.ca/2013roadtotheroar-en/tickets/ For ticket information about the 2013 Tim Hortons Roar of the Rings, presented by Monsanto, go to https://www.curling.ca/2013roaroftherings-en/tickets/