The reigning Canadian champs will get another chance to wear the Maple Leaf on the world stage. Brad Jacobs’ team from Sault Ste. Marie, Ont., which won the Tim Hortons Brier last March in Edmonton before claiming silver at the Ford World Men’s Championship in Victoria, B.C., clinched the final berth into the Tim Hortons Roar of the Rings Canadian Curling Trials, presented by Monsanto, on Sunday night in Kitchener, Ont. 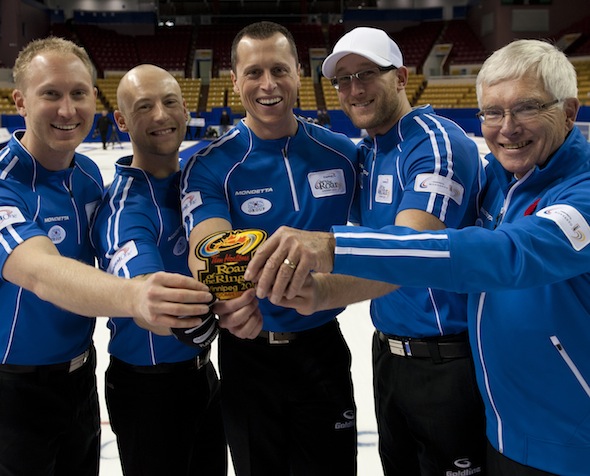 A 7-5 win over 2006 Olympic gold-medallist Brad Gushue of St. John’s, N.L., in the final men’s Trials qualifier of the Capital One Road to the Roar Pre-Trials, presented by Monsanto, landed Jacobs, Winnipeg-born vice-skip Ryan Fry, second E.J. Harnden, lead Ryan Harnden and coach Tom Coulterman in the Tim Hortons Roar of the Rings, Dec. 1-8 at the MTS Centre in Winnipeg. There, they’ll join an eight-team men’s field rounded out by Winnipeg’s Jeff Stoughton and Mike McEwen, reigning Olympic gold-medallist Kevin Martin of Edmonton, 2011 world champ Kevin Koe of Edmonton, 2012 world champ Glenn Howard of Penetanguishene, Ont., John Epping of Toronto and freshly qualified John Morris of Kelowna/Vernon, B.C., to play for the right to represent Canada at the 2014 Winter Olympics in Sochi, Russia. “We’re there,” said Jacobs. “I’m really proud of the guys for coming out and playing the way they did. That was an awesome game, back and forth, and it was nice to get that three after they got those two momentum steals. We were able to get it back, and now we get to go to the Trials, so mission accomplished.” There were some significant early momentum swings in both directions. Jacobs opened the game with an open hit for a deuce, but Gushue — backed up by vice-skip Brett Gallant, second Adam Casey, lead Geoff Walker and coach Peter Gallant — responded with single points in the next three ends. 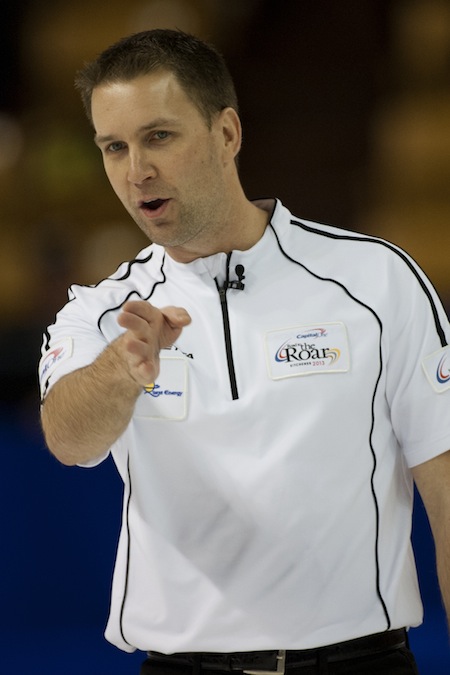 In the fifth, though, some early misses had Gushue chasing, and he left Jacobs with an open draw to score three. Gushue got some hope back in the eighth with a spectacular angle raise double by Gushue  to force Jacobs to one. But Gushue was forced to one in the ninth, and a horribly timed pick on Casey’s guard attempt in the 10th, and a wonderful Jacobs draw to backing, allowed the Northern Ontarians to finish off the win. “It’s disappointing,” said Gushue. “We played pretty well, actually. I missed a couple shots in the fifth end when we gave up three, and that caused the loss, to be quite honest. I’ve said all along that this team probably wasn’t ready to win this year. We’re still young, we still make stupid mistakes and it cost us this week. If we got through here, I think we could have made a run in Winnipeg if a lot of things went our way. But maybe it’s a blessing that we get to take some time off and regroup a little earlier than some of the Trials teams, and be ready for (the Tim Hortons Brier in) Kamloops.” Jacobs will open the Tim Hortons Roar of the Rings on Dec. 1 against Stoughton — a rematch of the 2013 Tim Hortons Brier final, won by Jacobs 11-4. “Oh, yeah? I bet he’s going to be pretty nervous,” said a chuckling Jacobs when told of his first assignment. “We’re buddies with those guys. The field is phenomenal, all the best teams in Canada, in the world there. Every game is going to be extremely hard and I’m sure extremely entertaining for everybody. We can’t wait.” Final attendance for the 2013 Capital One Road to the Roar was 29,617 — nearly a 20 per cent increase on the total posted in the inaugural Road to the Roar in 2009 at Prince George, B.C. To see interviews with Jacobs and Gushue, click here. The women’s field at the Tim Hortons Roar of the Rings consists of Winnipeg’s Jennifer Jones and Chelsea Carey, Edmonton’s Heather Nedohin and Val Sweeting, Sherry Middaugh of Victoria Harbour, Ont., Stefanie Lawton of Saskatoon, Renée Sonnenberg of Grande Prairie, Alta., and reigning Scotties Tournament of Hearts champion Rachel Homan of Ottawa. Scoring, statistics and the final draw brackets are available at www.curling.ca/scoreboard/ The French version of this story will be available at www.curling.ca/2013roadtotheroar-fr/ as soon as possible. For ticket information about the 2013 Tim Hortons Roar of the Rings, presented by Monsanto, go to www.curling.ca/2013roaroftherings-en/tickets/