The Pre-Qualifying round began this afternoon at the Canadian Mixed Curling Championship at the Rideau Curling Club in Ottawa. Four teams are competing for two berths in the main round robin draw scheduled to begin at Saturday at 7:30 p.m. (all times Eastern). 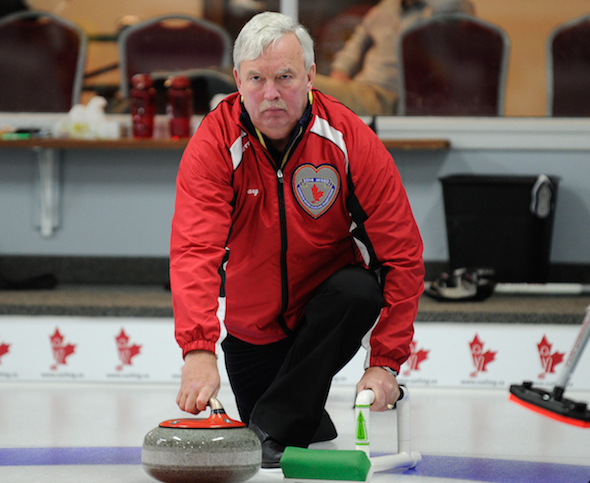 In this first draw of the double knockout, Gary Oke’s team from Newfoundland/Labrador (third Susan Curtis, second Terry Oke, lead Sigrid Fitzpatrick) stole a single point in the 10th end for a 6-5 victory when Northwest Territories skip Steve Moss’s draw to the four-foot was too heavy. Oke was up 3-1 after four ends but surrendered a deuce in the fifth followed by NWT steals of one in both the seventh and eighth ends.  The Newfoundland and Labrador skip scored a solid two points in the ninth end to tie it up coming home. In the final end, Oke had a stone just in the 12-foot ring near the boards with one stone each to come. Oke drew beautifully to the edge of the four-foot under cover, leaving the full four-foot for his opponent, which he missed. Oke will now face Yukon’s Bob Smallwood in the second draw, set for 7 p.m. Thursday. The winner of this match will advance to the main round robin. Smallwood, backed up by third Tamar Vandenberghe, second Adam Pleasant and lead Jody Smallwood, seemed on his way to a laugher against Nunavut’s Ed Sattelberger, leading 4-0 after three ends. The Iqaluit skipper fought his way back though to 4-4 after six. After a blank in seven,  the Yukon scored a nice deuce to lead 6-4. Nunavut blanked the ninth, and Sattelberger made a nice double take-out to sit two; however, Smallwood responded with his own double take-out, this time a game winner. The final score was 6-4. The loser of the ‘A’ final between NL and Yukon will drop to the B final to play the winner of NWT versus Nunavut. The loser of that game is eliminated. The final team advancing to the main round-robin will be decided in the B-Event final at 2 p.m. Friday. Live scoring can be viewed www.curling.ca/scoreboard/ The Official Mixed web site can be found at www.curling.ca/2014mixed-en/ and the host committee’s web page is www.canadianmixed.com/