Quebec’s Mike Fournier continues his strong play at the 2014 Canadian Mixed Curling Championship at the Rideau CC in Ottawa. 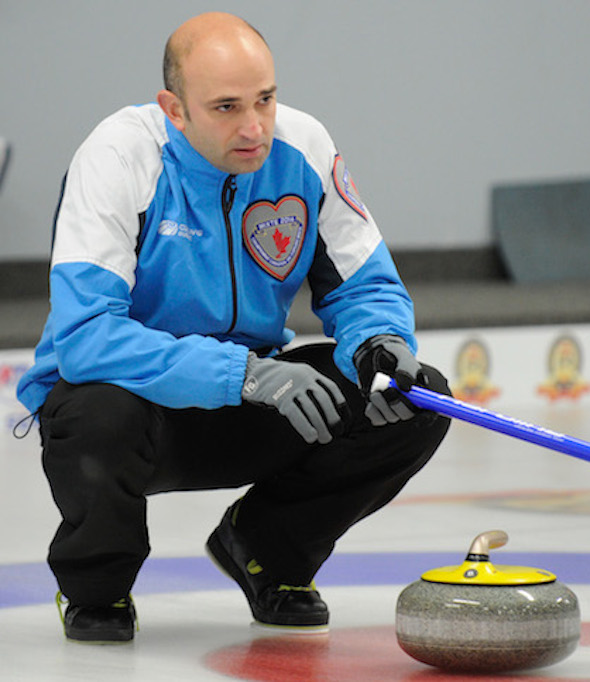 Fournier improved to 3-0 by defeating 2009 Canadian Mixed champion Sean Grassie of Manitoba 5-3 on Sunday night. The Montreal-Glenmore CC foursome stole two points in the fourth end, then stole single points in the fifth and sixth ends to lead 5-1. The steal in the sixth was a result of a hog-line violation by Grassie, who was trying to negotiate a port for a possible two points. Fournier. with third Alanna Routledge, second Mike Kennedy and lead Joelle St-Hilaire, finished third in the country at least year’s Canadian Mixed (Town of Mount Royal, QC) and are now the only unbeaten team in the field at this year’s event. The Manitoba foursome dropped to 1-2. Saskatchewan’s Shaun Meachem was looking to keep pace with Quebec but ran into trouble against Darren Moulding of Alberta, bowing 10-5. Moulding led 3-0 after three ends only to have Meachem tie it up with a field goal in the fourth. In the fifth end, Moulding restored his three-point lead but Meachem made a nice shot in the sixth, clipping an Alberta counter to score two to close the gap to one. Undaunted, Moulding scored another three points in the seventh to lead 9-5 and stole one more in the eighth to hand Saskatchewan its first loss. Both teams are at 2-1 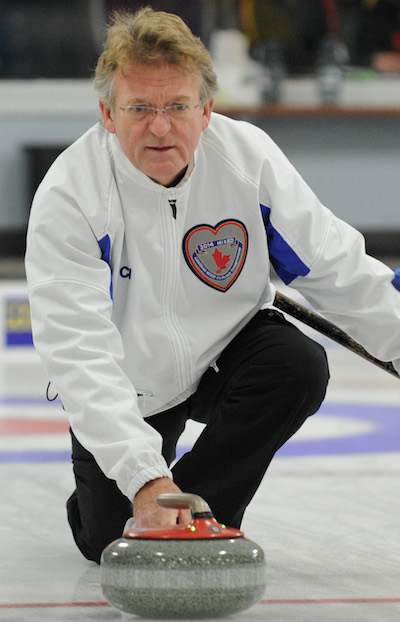 Ontario’s Cory Heggestad looked to keep pace with unbeaten Quebec, but dropped an 8-6 decision to formerly winlessKeith Switzer of B.C. Switzer was on his game leading 4-3 playing the seventh. Although Ontario was laying one near the button behind a wall of stones, Heggestad went with a wide in-turn attempt and drew full four-foot on the tee-line, narrowly getting by a counter in the top four foot to score two. Switzer wasted no time regaining the lead however, grabbing his own deuce in the eighth. Heggestad missed a draw for a pair in the ninth end leaving the game tied at six coming home, and Switzer was able to navigate a tight port to get the winning deuce in the 10th. Switzer’s record improved to 1-2 while Heggestad dropped to 2-1. In the final game of the evening, s draw, New Brunswick’s Sylvie Robichaud won her second consecutive game 7-4 over P.E.I.’s Rod MacDonald. The key end was the sixth when the Curl Moncton skip stole three points from the veteran P.E.I. squad. MacDonald rebounded with a pair in the seventh end, but Robichaud kept things clean with a blanked eighth end, followed by two points in the ninth by picking out the P.E.I. shot stone. New Brunswick is now 2-1while P.E.I. drops to 1-2. Teams with third-round byes: Newfoundland & Labrador (0-2), Northern Ontario (1-1), Northwest Territories (0-2) and Nova Scotia (1-1). Round-robin games continue until Friday morning. The semifinal will be played that day at 7:30 p.m. with the Championship Final at 2 p.m. on Saturday, Nov. 23. Live scoring can be viewed  www.curling.ca/scoreboard The Official Mixed Web Site  www.curling.ca/2014mixed-en Host committee’s web page  www.canadianmixed.com/ Facebook  www.facebook.com/canadianmixed