It’s tight at the top of the Canadian Mixed championship

Five teams will head into the evening draw of the 2014 Canadian Mixed Curling Championship tied for first place, thanks to the results of Draw 6 on Monday afternoon at the Rideau Curling Club in Ottawa. 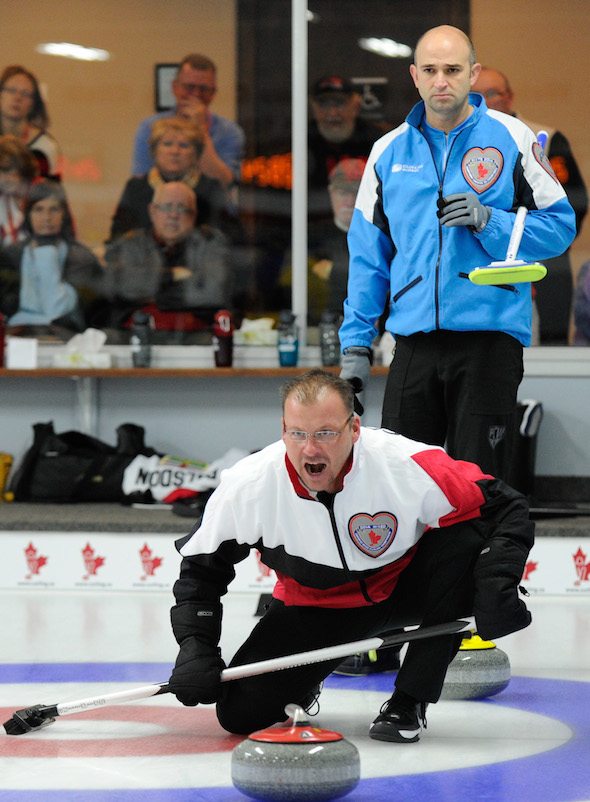 In the feature match, Quebec (Mike Fournier) dropped from the ranks of the unbeaten bowing 6-4 to defending champion Cory Heggestad of Ontario. The Orillia CC skip, scored single points in the first four ends before Fournier could get on the board with a deuce in the fifth to make the score 4-2 for Ontario at the break. Fournier then stole one in the sixth and had a nice end going in the seventh, only to have Heggestad calmly raise a front stone to the button for a single. He would steal another in the eighth, and was able to hold Quebec to one in the ninth to cruise home with the win, which left both teams with 3-1 records. Meanwhile, New Brunswick’s Sylvie Robichaud, Alberta’s Darren Moulding and Saskatchewan’s Shaun Meachem kept up their impressive play, each earning solid wins to get into the logjam at 3-1. Robichaud, with third Marcel Robichaud, second Marie Richard and lead Lloyd Morrison, scored two on the fourth end, three more in the sixth, then singles in the eighth and ninth for a comfortable 7-3 win over B.C.’s Keith Switzer, who dropped to 1-3. Moulding and his Alberta team from the Coaldale and Airdrie CCs, meanwhile, stifled former mixed champion Sean Grassie of Manitoba 8-4. Counts of two in each of the first, fifth and seventh ends led him to an 8-4 win. Manitoba fell to 1-3 with the loss. Finally, Saskatchewan’s Shaun Meachem and team continued to impress, thumping P.E.I.’s Rod MacDonald 10-4, finishing things off with four points in the ninth. P.E.I.’s record dipped to 1-3. Teams with the afternoon byes: Northwest Territories (0-3), Newfoundland & Labrador (1-2), Nova Scotia (1-2) & Northern Ontario (2-1). Round-robin games continue until Friday morning. The semifinal will be played that day at 7:30 p.m. with the Championship Final at 2 p.m. on Saturday, Nov. 23. Live scoring can be viewed  www.curling.ca/scoreboard The Official Mixed Web Site  www.curling.ca/2014mixed-en Host committee’s web page  www.canadianmixed.com/ Facebook  www.facebook.com/canadianmixed