Alberta closing in on playoff berth at Canadian Mixed

Alberta’s Darren Moulding won his eighth consecutive game Wednesday afternoon but not without a battle against Northern Ontario’s Charlie Robert in Draw 12 at the 2014 Canadian Mixed Curling Championship at the Rideau CC in Ottawa. 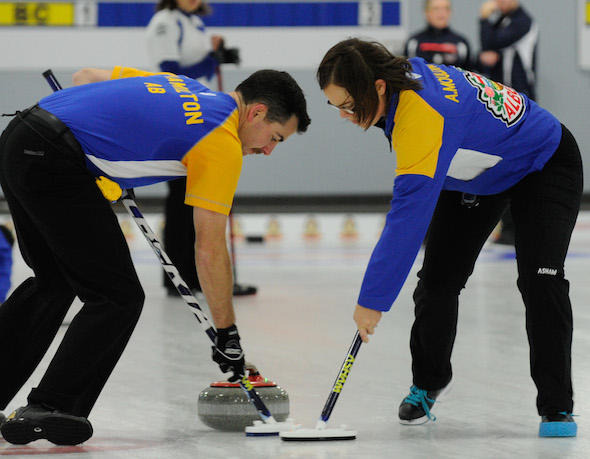 In a game with a number of highlight-reel shots by both teams, Moulding delivered a quiet inturn tapback of the Northern Ontario shot stone in the four-foot for a dramatic 8-6 win over the Sault Ste. Marie skip. Moulding earned his first lead of the game with a steal of one in the eighth end. Robert was then forced to a single in the ninth, setting up the drama in the final end. Moulding is now 8-1 and one win away from nailing down a playoff berth.  Robert on the other hand, cannot afford to lose another game, sitting at 3-4. Montreal-Glenmore skip Mike Fournier stayed close to Moulding, posting his seventh win, an 8-2 victory over Newfoundland and Labrador’s Gary Oke. Fournier jumped out a 4-0 lead after two ends and coasted to the victory. Quebec is 7-2 and alone in second place. Newfoundland and Labrador dropped to 1-6. 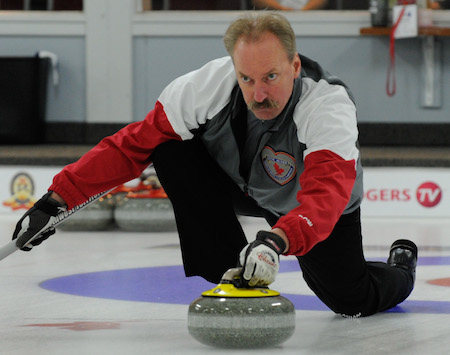 All teams now have at least one victory at the 2014 Mixed, with the Northwest Territories’ Steve Moss getting on the board with 9-4 thumping of B.C.’s Keith Switzer.  Tied at three playing the fourth end, Moss counted three and then stole three more in the sixth. The teams traded points in the next two ends before B.C. conceded. The Territories are 1-6 while B.C. fell to 2-7. In the final game of the afternoon draw, Nova Scotia’s Rob Harris saw his playoff hopes take a dip after falling 7-4 to P.E.I.’s Rod MacDonald. Harris took a 4-3 lead in the seventh end, but promptly gave up deuces in the eighth and ninth ends. MacDonald’s Silver Fox Curling & Yacht Club’s foursome ran Nova Scotia out of stones for the win to improve to 4-5, while the Bluenosers dropped to 3-4. Teams with the afternoon byes: New Brunswick (6-1), Saskatchewan (5-2), Ontario (4-3) & Manitoba (2-5). The team finishing first overall advances to the championship final while the second-place team will meet the third-place team in the semifinal. Round-robin games continue until Friday morning. The semifinal will be played that day at 7:30 p.m. with the Championship Final at 2 p.m. on Saturday. Live scoring can be viewed  www.curling.ca/scoreboard The Official Mixed Web Site  www.curling.ca/2014mixed-en Host committee’s web page  www.canadianmixed.com/ Facebook  www.facebook.com/canadianmixed