Alberta’s Darren Moulding and his team continued their impressive play at the 2014 Canadian Mixed Curling Championship on Wednesday morning at the Rideau CC in Ottawa. The foursome from the Coaldale and Airdrie CCs posted its seventh consecutive win after an opening-draw loss with a lopsided 9-2 victory over B.C.’s Keith Switzer in a game conceded after seven ends. Leading 3-1 playing the fourth end, Moulding positioned his stones in ideal spots, forcing Switzer to go wide with a draw to the edge of the four-foot. Unfortunately for the B.C. skipper, he was light, allowing a four-point steal. From there, Alberta used its big-weight prowess to finish the game three ends later. 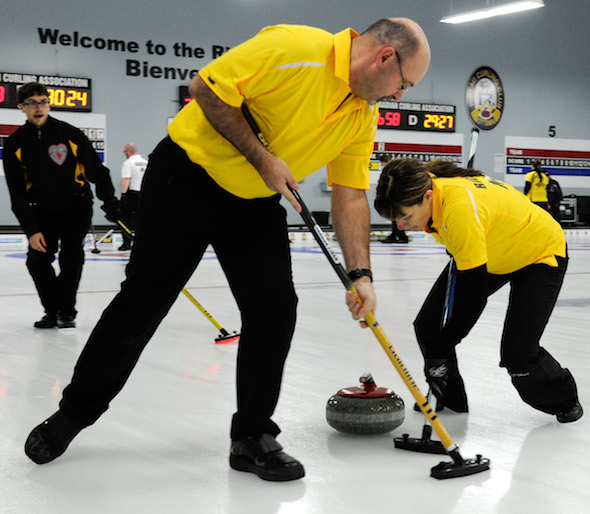 Sylvie Robichaud’s New Brunswick entry, meanwhile, survived an extra-end nailbiter against 2009 Canadian Mixed champion Sean Grassie of Manitoba with a 5-4 win to keep pace with Alberta at 6-1. It was a tightly played contest with the score knotted at three in the ninth end when Robichaud stole a single for a one-point lead playing the 10th end. Grassie was forced to draw for his single to set up the extra. In the 11th, New Brunswick had a stone on the centre line in the top twelve-foot while Manitoba had a stone in the twelve-foot to the side. Grassie neatly drew around the New Brunswick stone to the button and completely buried. Without missing a beat, Robichaud made the raise takeout dead-on leaving Grassie only a double takeout to force Robichaud to draw the eight-foot. He made the double and she drew for the win. Manitoba dropped to 2-5. In another very entertaining and well-played game, Quebec’s Mike Fournier shook off a Draw 10 loss to New Brunswick by scoring two in the 10th end to edge P.E.I.’s Rod MacDonald 8-7. The teams exchanged deuces in ends four through seven. In the eighth end, P.E.I. scored a single to tie the game at six, and then stole a single in the ninth to be one up coming home without the hammer. Fournier drew nicely behind a wide corner guard but deep in the rings. MacDonald tried to follow him to save the end but gently rubbed shot stone, sliding past it for second shot. Fournier put his final stone in the top four-foot for the win. Fournier is 6-2, alone in third place, while P.E.I. dropped to 3-5. 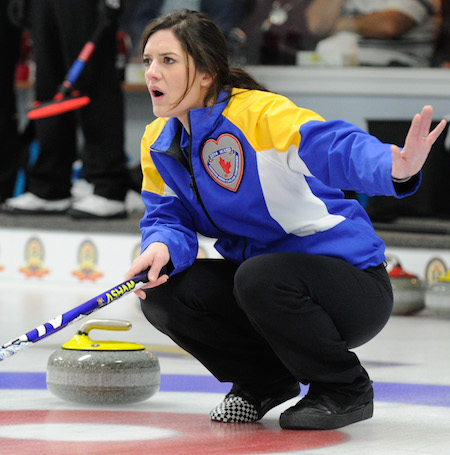 Saskatchewan’s Shaun Meachem wanted to keep pace with Alberta while facing a tough defending champion Ontario opponent, but it was Cory Heggestad’s Orillia foursome keeping its playoff hopes alive with a 9-3 win. After dropping both games Tuesday, Ontario recorded key steal of two in the sixth end and then three more points in the eighth to finish it off. Ontario is now 4-3 while Saskatchewan drops to 5-2, alone in fourth place. Teams with the afternoon byes: Nova Scotia (3-3), Northern Ontario (3-3), Newfoundland & Labrador (1-5) & Northwest Territories (0-6). The team finishing first overall advances to the championship final while the second-place team will meet the third-place team in the semifinal. Round-robin games continue until Friday morning. The semifinal will be played that day at 7:30 p.m. with the Championship Final at 2 p.m. on Saturday, Nov. 23. Live scoring can be viewed  www.curling.ca/scoreboard The Official Mixed Web Site  www.curling.ca/2014mixed-en Host committee’s web page  www.canadianmixed.com/ Facebook  www.facebook.com/canadianmixed