Playoff race heating up at the Canadian Mixed

The results of Draw 15 of this year’s Canadian Mixed curling championship at the Rideau Curling Club in Ottawa did little to clear up the playoff scenarios for this coming weekend. 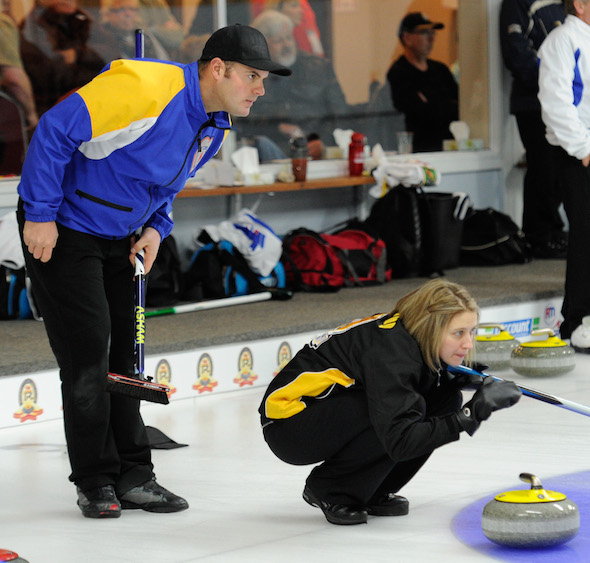 Alberta’s Darren Moulding of the Coaldale & Airdrie CCs looked to win his ninth consecutive game and clinch at least a berth in the semifinals but those hopes were dashed, as was the win streak, by the strong performance of New Brunswick’s Sylvie Robichaud in a 9-4 victory for the Atlantic squad. While Moulding did not have one of his better games with a 56 shooting percentage, Robichaud’s Curl Moncton squad kept the pressure up the entire game, buoyed by third Marcel Robichaud’s stellar 92 per cent effort. New Brunswick scored three in the second end and added another three in the fifth end and never looked back in improving to 7-3, while Alberta dropped to 8-2 — tied for top spot in the 12-team round robin with Saskatchewan’s Shaun Meachem. Regardless of the results of the remaining two draws, Moulding can still finish first overall and earn a bye to Saturday’s championship final with a victory later tonight over Newfoundland/Labrador’s Gary Oke by virtue of an earlier round-robin win over Saskatchewan. With the Alberta loss, though, Quebec’s Mike Fournier still had a chance to finish first but was denied by Meachem, whose team earned its eighth win with a 7-5 victory over Fournier. Fournier scored a great two points to tie the game in the seventh end. Meachem missed a chance to score two in the eighth and settled for a single, but then stole the pivotal point in the ninth for a two-point lead coming home. The Swift Current-based team then kept it clean, running Quebec out of stones. Fournier, 7-3, is now in a three-way tie for the third and final playoff spot with Robichaud and defending champion Cory Heggestad of Ontario. 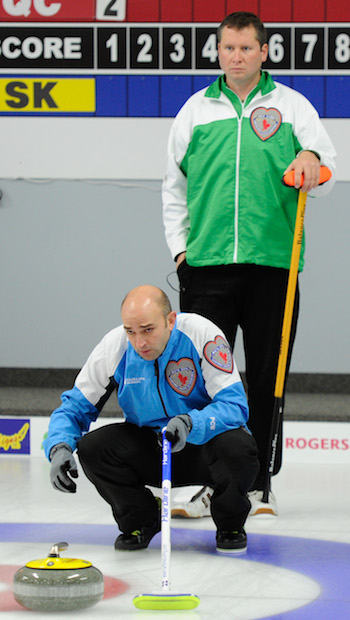 Heggestad needed an extra end to squeak by P.E.I.’s Rod MacDonald 7-6. The Ontario skip needed the win to keep his repeat title hopes alive and looked good with a two-point lead coming home. Facing what looked like a routine double takeout for the win in the 10th, Heggestad was a bit wide and only removed a single stone, leaving P.E.I. the draw for the tie. In the extra end, MacDonald needed to make a tricky double takeout to force Ontario to draw but missed it and Heggestad did not have to throw his last stone. In the final game of the draw, 2009 Canadian Mixed champion Sean Grassie scored an easy 10-3 win over B.C.’s Keith Switzer. Manitoba is 4-6 while Switzer is 2-8. Key matchups in Draw 16 tonight feature: Alberta vs Newfoundland/Labrador and Quebec vs Nova Scotia. Nova Scotia, 5-4, must win tonight and hope for a losses by Ontario and New Brunswick to get into a tiebreaker. Teams with the afternoon byes were: Nova Scotia (5-4); Northern Ontario (3-6); Northwest Territories (2-7) and Newfoundland/Labrador (1-8). The team finishing first overall advances to the championship final while the second-place team will meet the third-place team in the semifinal. Round-robin games continue until Friday morning. The semifinal will be played that day at 7:30 p.m. with the Championship Final at 2 p.m. on Saturday. Live scoring can be viewed  www.curling.ca/scoreboard The Official Mixed Web Site  www.curling.ca/2014mixed-en Host committee’s web page  www.canadianmixed.com/ Facebook  www.facebook.com/canadianmixed