Alberta and Saskatchewan have nailed down playoff berths, while New Brunswick and Ontario will fight it out in a tiebreaker for the third and final playoff berth at the 2014 Canadian Mixed Curling Championship at the Rideau Curling Club in Ottawa. 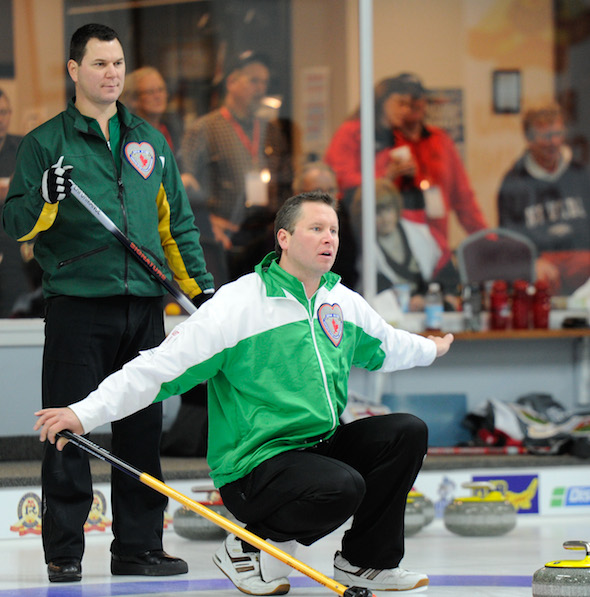 Both New Brunswick’s Sylvie Robichaud and defending champion Cory Heggestad of Ontario posted victories on Friday morning in the final draw of round-robin play to finish with 8-3 records, tied for third place. They will meet Friday at 2:30 p.m. (all times Eastern) for the right to play Shaun Meachem of Saskatchewan (9-2) in the semifinal Friday at 7:30 p.m. The semifinal winner will advance to take on Alberta’s Darren Moulding (9-2) in the championship game Saturday at 2 p.m. Robichaud’s team from Curl Moncton (third Marcel Robichaud, second Marie Richard, lead Lloyd Morrison) was a 7-3 winner over Newfoundland/Labrador’s Gary Oke on Friday morning. Robichaud, who is bidding to be just the second female skip to win the Canadian mixed (Alberta’s Shannon Kleibrink was the first, in 2004), scored deuces in the third and sixth ends, while stealing singles in the fourth and seventh ends. Newfoundland/Labrador finished with a 1-10 record. Heggestad, whose Orillia Curling Club team is rounded out by third Heather Graham, second Greg Balsdon and lead Amy Balsdon, was pushed had by the Northwest Territories’ Steve Moss before prevailing 7-4. Ontariop stole singles in the third and fourth ends, and scored three in the sixth to go up 5-1. But the Territories came back with a deuce in the seventh and a stolen point in the eighth to shave the margin to one. But Ontario closed out with singles in the ninth and 10th ends to send the Territories home with a 2-9 record. The Saskatchewan champs from Swift Current — Meachem, third Kelly Wood, second Carl deConinck Smith and lead Kelsey Dutton — made short work of Northern Ontario’s Charlie Robert on Friday morning. Saskatchewan took a 4-2 lead thanks to deuces in the third and fifth ends, and then pulled away with steals of one in the sixth and deuces in the seventh and eighth. Northern Ontario finished with a 4-7 record. In the other Draw 17 game, Manitoba’s Sean Grassie stole four in the second end en route to an 11-5 triumph over Nova Scotia’s Rob Harris. Manitoba finished with a 5-6 record, while Nova Scotia ended up at 6-5. The Alberta champs, 9-2 (but finishing first thanks to their round-robin win over Saskatchewan) had the bye, as did Quebec’s Mike Fournier (7-4), P.E.I.’s Rod MacDonald (5-6) and B.C.’s Keith Switzer (2-9). Live scoring can be viewed  www.curling.ca/scoreboard The Official Mixed Web Site  www.curling.ca/2014mixed-en Host committee’s web page  www.canadianmixed.com/ Facebook  www.facebook.com/canadianmixed