It starts with a dream. A dream to become Canadian champion. The dream came true for the Dan Sherrard Alberta rink and Stacey Fordyce’s Manitoba foursome and as the Dominion Curling Club Championships wrapped six-days of competition at the Fort William Curling Club rink Saturday. A repeat is hard to do, but Sherrard and his Crestwood Curling Club rink of Brandon Klassen, Scott McClements and Todd Kaasten from Edmonton did just winning a second straight title at the national championship for club curlers by defeating Saskatchewan’s Corey Martens and his crew from the Martensville Curling Club 5-2. It was not a good day for Saskatchewan as Fordyce and and her Brandon Curling Club rink of  Christy Erickson, Stacey Irwin and Pam Gouldie used late end heroics to defeat  Heather Burnett and her rink  also from Martensville 6-4 in the women’s championship game. “This is huge, it’s a Canadian title,” said Fordyce to finish the The Dominion championship with a perfect 8-0 record, a sweet win for a team who has been chasing The Dominion dream for four years with a nucleus that has been together since losing the semi-finals at the Dominions in Prince Edward Island in 2010. In 2012, the team lost the provincial semi-finals in Manitoba. 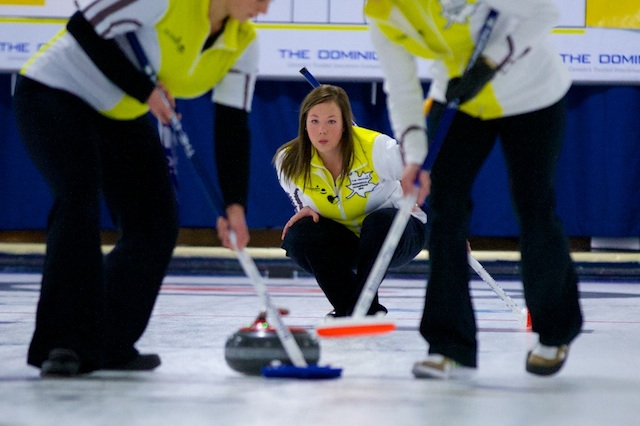 In the men’s game, the Alberta rink made the most of a draw for three in a decisive seventh end to raise the championship trophy to the rafters of the historic Fort William club for a second straight Canadian title. “This is unbelievable. We certainly did not see this happening a few years ago when we battling in our club loosing as many games as we were winning,” said the Alberta skip pointing out The Dominion is growing in popularity for club curlers. Martens and his Martensville Curling Club rink of Leo Perrin, Kevin Fehr and Chad Krikau proved a worthy opponent for Alberta as the two teams had finished first in their respective pools with 5-1 records and both came through the semi-finals with convincing wins. The three ender in the seventh end was generated by relentless pressure from the Edmonton rink who went into the seventh end tied at two knowing that they didn’t want to get forced to one. “Our plan was to load em up in the top of the house and probably leave myself a tough shot for two or at worst give them a steal of one with us having the hammer coming home,” said the 28-year-old Alberta skip showing great respect for Martens and his squad. The Saskatchewan skip knew he was in trouble when he came to throw his final stone without hammer as Alberta was lying four with 13 of the 16 rocks in play. Martens made the most of what he had running one of his front guards into the pile of Alberta yellow to cut them down to two. Sherrard going to the open side made good on a draw to the four foot and Alberta was three up coming home. Martens pointed out that their management of time clock played a factor in the big end. “We were running a little low on time and that contributed to us not being able to look at all our options and think our shots through properly. But give them credit, they made four great shots that end showing why they are a good curling team,” said the 35-year-old skip who lives in a hot bed of curling around Saskatoon. It was a tightly tightly played game that started with a blank end and the teams trading singles before Alberta stole one in the fourth end to go up 2-1. Martens then had a chance for a deuce in the sixth end to give Saskatchewan the lead but Martensville skip was unable to raise a front guard in for an extra point settling for  single that tied the game at two after six ends. 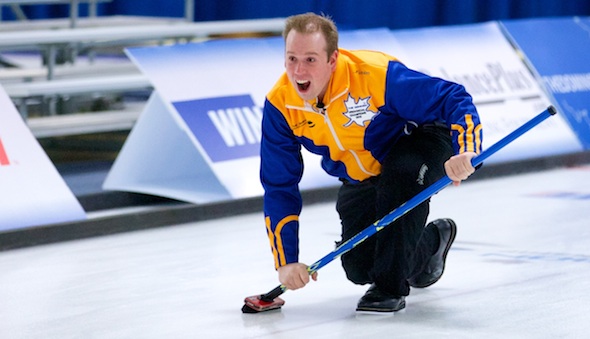 Women’s Final In the women’s final,  Manitoba took control of their contest in the sixth end when the Brandon skip executed a quiet weight tap for a deuce to go up 5-3. Saskatchewan was set up for a steal in the end with rocks in the four foot and guards out front but Burnett throwing a guard with her last stone came heavy opening the door for Manitoba who had been chasing the whole end. In the seventh end, the Martensville Curling Club squad found themselves in trouble again, with Burnett forced into another difficult shot. A missed line call proved costly as Burnett facing three Manitoba counters threw perfect weight on a quiet weight tap but her punched stone slid wide of the Manitoba shot rock stopping in the four foot to cut Manitoba down to one. The stolen point gave Fordyce a three point edge coming home. Saskatchewan was left with a tough long split for three to tie the game, but it was not to be as Fordyce and her Brandon rink celebrated a Canadian title. “Absolutely mission accomplished but it was a battle out there. It was a great game  game but we finished with our goal, so we are happy about that,” said Fordyce who will also be looking at making a run at Scotties playdowns in Manitoba skipping her other Brandon team. It was disappointing loss Burnett and her Martensville rink of Melissa Surkan, Samantha Yachiw and Joanne Wood who had to once again come from behind like they had in their semi-final with the Yukon winning an extra end win over the Yukon Friday night. Saskatchewan found themselves down 3-0 after three ends to Manitoba but battled back to tie the game after five ends. The tears from the Saskatchewan third Melissa Surkan said it all, but Burnett put the loss in a positive perspective. “There are 12 other teams that would have liked to be in the final and we were one of them, so we have to very proud of that,” said Burnett reflecting on their week at the national championships. The Dominion Curling Club Championships in Thunder Bay raised $73,000 for Spinal Cord Injury Ontario, the most ever for the charity of choice in the five years of The Dominion. Halifax, Nova Scotia will be the host of the 2014 event. About The Dominion Curling Club Championship: The Dominion Curling Club Championship is an annual event for men’s and women’s curling teams who have won their respective local club championships. Winning teams from each club play down to produce a provincial/territorial champion from all ten provinces and three territories, plus a separate entry for Northern Ontario, who will then compete at the national level. The event raises funds in support of Spinal Cord Injury (SCI). Their mission is to assist persons with spinal cord injuries and other physical disabilities achieve independence, self-reliance and full community participation. Over the past four years, the event has raised over $300,000 for SCI chapters across Canada and wheelchair curling. To learn more, visit thedominioncurls.ca 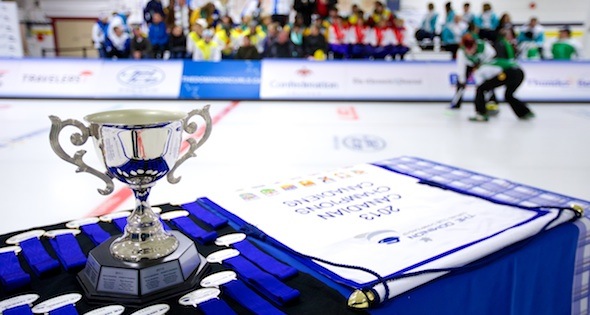