Jacobs gets the best of Stoughton in Brier rematch

It was a repeat of last season’s Tim Hortons Brier final, but it ended with the same result. Brad Jacobs defeated Jeff Stoughton 7-4 during Sunday evening’s opening men’s draw of the Tim Hortons Roar of the Rings, presented by Monsanto, at the MTS Centre in WInnipeg. 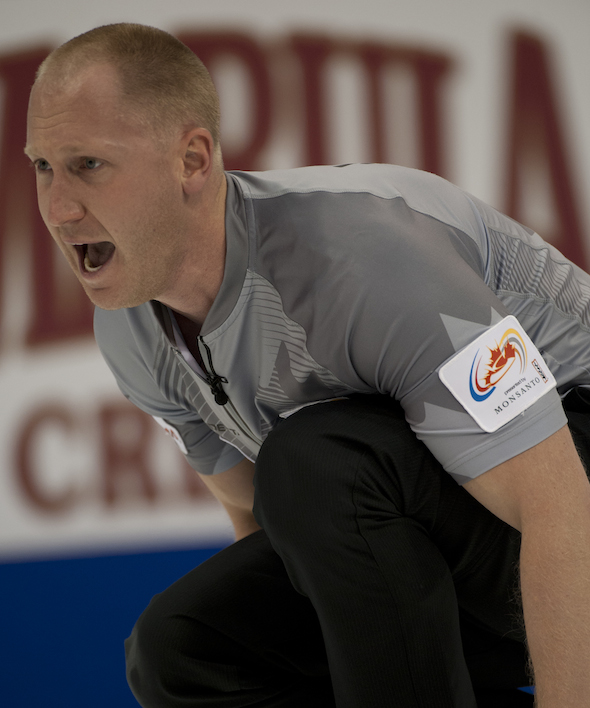 Brad Jacobs urges on his sweepers during his win over Jeff Stoughton on Sunday night. (Photo, CCA/Michael Burns)

After blanking the first end, Jacobs and his Sault Ste. Marie, Ont. foursome of Ryan Fry, E.J. Harnden, Ryan Harnden, alternate Caleb Flaxey and coach Tom Coulterman drew to the button for two points in the second end. After a blanked third end, Stoughton’s first stone of the fourth end picked and he was forced to draw to the pin with his final shot to trail Jacobs 2-1. Jacobs increased that lead heading into the fifth-end break. Stoughton was sitting shot rock and attempted a guard on his final shot of the end, but slid into the top of the 12-foot. Jacobs made the runback double on his final shot to count two points and take a 4-1 lead. “I think that (shot) kind of got us going. We were winning 2-1 at that point, we got a deuce forced and then that extended the lead nicely and I think just kind of boosted everyone up a little bit,” Jacobs said. Stoughton and his team of Jon Mead, Reid Carruthers, Mark Nichols, alternate Garth Smith and coach Rob Meakin scored two points in the sixth end on an open hit to trail Jacobs 4-3. After a blanked seventh end, Jacobs added another deuce when he wicked off a stone and rolled to the pin to take a 6-3 lead. 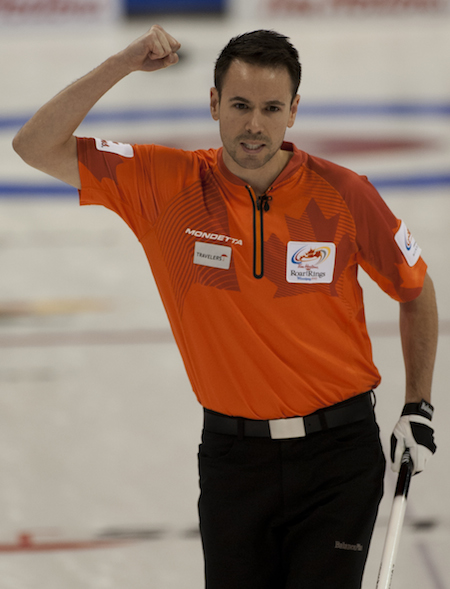 “There wasn’t much we could do,” Stoughton said. “We didn’t make him make a tough shot and I think he made one decent shot and that was that double. Other than that we didn’t get much pressure on him.” After forcing Stoughton to take one in the ninth end, Jacobs was coming home with a 6-4 lead and the hammer. With his last rock, Stoughton hit a Jacobs stone to sit on the button and left him with an open hit for the 7-4 victory. “We were able to go out there and kind of take the crowd out of it, which was huge. I think getting hammer early was also big,” Jacobs said In other Draw 2 action, Kevin Martin of Edmonton defeated Winnipegger Mike McEwen thanks in part to a score of three points in the seventh end. Toronto’s John Epping, meanwhile, squeaked out a 9-8 victory over Edmonton’s Kevin Koe. Epping cracked the first big end of the game with three points in the fourth end. After that, the teams exchanged deuces in the fifth through ninth ends, and it allowed Epping to come home tied in the 10th end with the hammer and score a single on a lovely inturn draw. In the other late game, John Morris and his rink from Vernon and Kelowna, B.C. edged Penetanguishene, Ont.’s Glenn Howard 8-6. Morris jumped to an early 3-0 lead after two ends, but Howard battled back in. A three-ender for Morris in the ninth end would put the game out of reach for Howard, who only scored a point in the 10th end. The women will take to the ice on Monday morning at 8:30 a.m. (CST) for Draw 3. Rachel Homan of Ottawa will look for her first win against Renée Sonnenberg of Grande Prairie, Alta. Chelsea Carey of Winnipeg will take on Edmonton’s Heather Nedohin. Val Sweeting of Edmonton is up against Saskatoon’s Stefanie Lawton. Wrapping up Draw 3 will be the battle of undefeated teams with Winnipeg’s Jennifer Jones against Coldwater, Ont.’s Sherry Middaugh. All draws for the Tim Hortons Roar of the Rings will be televised live on TSN/RDS 2, the official broadcasting partner of the Season of Champions. Live scoring, statistics and updated draw brackets are available at: www.curling.ca/scoreboard/ To purchase tickets to the Tim Hortons Roar of the Rings, presented by Monsanto go to: www.curling.ca/2013roaroftherings-en/tickets/ The French version of this story will be available at www.curling.ca/2013roaroftherings-fr/ as soon as possible.