Middaugh, Carey headed to tiebreaker at Tim Hortons Roar of the Rings

Sherry Middaugh defeated Chelsea Carey 7-6 Thursday afternoon to secure her spot in a tiebreaker at the Tim Hortons Roar of the Rings, presented by Monsanto at the MTS Centre. 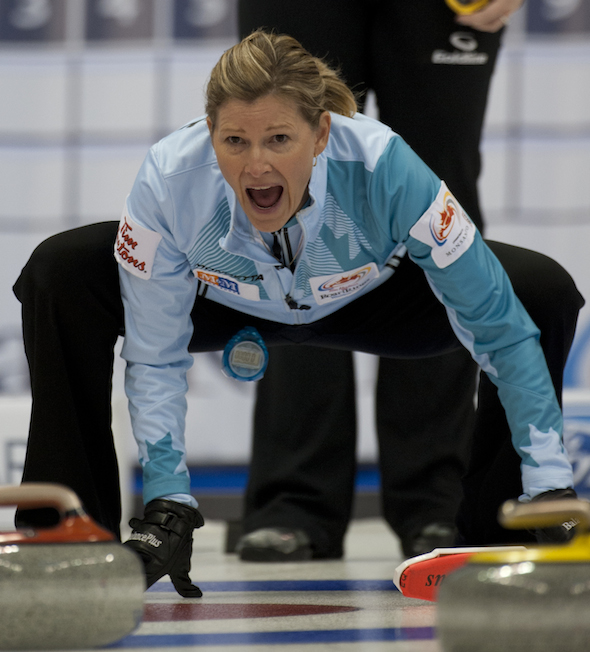 Sherry Middaugh of Coldwater, Ont., is still alive in her bid for a berth in the 2014 Olympics. (Photo, CCA/Michael Burns)

“Myself, I don’t think I played as well as I had been. But the team played really, really well and that’s what matters. And the fact that we’re in a tiebreaker, that’s a good thing,” Middaugh said. The victory means Carey (4-3) of Winnipeg and Middaugh (4-3) of Coldwater, Ont. will play each other once again, but this time in a do-or-die situation — Friday’s 1:30 p.m. (all times Central) tiebreaker. The winner will advance to the semifinal to play Rachel Homan. “That’s a bad loss, but we were guaranteed a tiebreaker either way,” Carey said. “If you had told us at the start of the week, that we’d have a tie breaker, we’d take it.” Middaugh and teammates Jo-Ann Rizzo, Lee Merklinger, Leigh Armstrong, alternate Lori Eddy, and coach Bob Turcotte blanked the ninth end to retain the hammer heading into the final end with a 6-6 tie. Carey attempted to make a freeze on her final shot but left some separation between her shot and the backing. On her final throw Middaugh tapped Carey’s stone back for the single point. 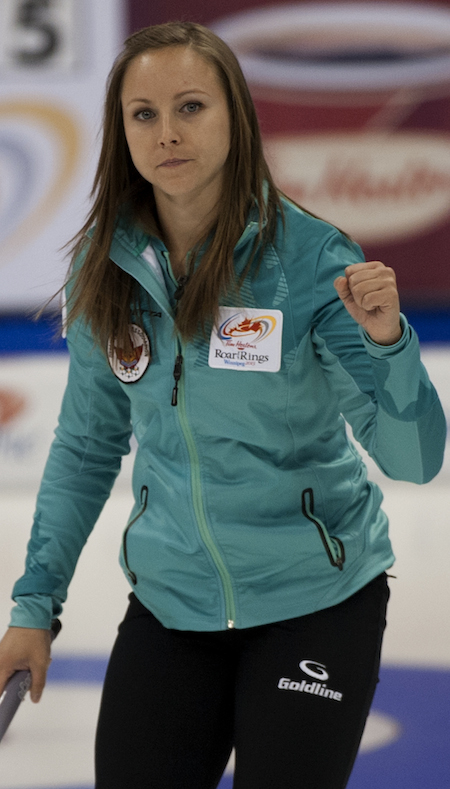 Carey, Kristy McDonald, Kristen Foster, Lindsay Titheridge, alternate Breanne Meakin, and coach Dan Carey opted to blank the first end and set up a deuce in the second. On her final shot, Carey had to tap a Middaugh stone off the button to sit two and take a 2-0 lead. Middaugh answered right back in the third end. The Coldwater, Ont. skip had a shot for three with a light double to rearrange the four-foot but didn’t quite make it. The score of two evened the game at 2-2. Carey attempted to blank the fourth end, but took a single instead to take a 3-2 lead. Middaugh put together scores in the next three ends to take control of the game against Carey. She started with a shot for two points in the fifth end and stole points in the sixth and seventh ends for a 6-3 lead before Carey scored a three-ender of her own to even the game at 6-6. In other Draw 12 results, Homan defeated Saskatoon’s Stefanie Lawton (2-5) with a 6-5 score to advance to the Tim Hortons Roar of the Rings semifinal. Homan’s 4-3 record ties Carey and Middaugh, but her team posted the best last-shot-draw total among the tied teams to nail down second place and a berth into Friday night’s 6:30 p.m. semifinal against the Carey-Middaugh winner. Also, Jennifer Jones of Winnipeg continued her hot play, defeating Edmonton’s Heather Nedohin 6-5. Jones wrapped up the round robin with a 6-1 record, while Nedohin was on the outside of the playoffs looking in with a record of 3-4. In the final game, Val Sweeting of Edmonton dropped a must-win game against Grande Prairie Alta.’s Renée Sonnenberg (2-5). The 9-8 extra end loss dropped Sweeting to a 3-4 record, just short of the playoffs. The men play their next-to-last game of the round robin at the Tim Hortons Roar of the Rings on Thursday night at 6:30 p.m. Glenn Howard (2-3) of Penetanguishene, Ont. will attempt to keep his Olympic dreams alive against the winless Kevin Koe (0-5) of Calgary. John Epping (1-4) of Toronto will face Vernon/Kelowna, B.C.’s John Morris (3-2). Winnipeg teams Jeff Stoughton (2-3) and Mike McEwen (2-3) will square off with the winner hoping to keep their playoff hopes in tact. The final game features the last two unbeaten teams on the men’s side. Reigning Olympic champion Kevin Martin (5-0) of Edmonton and defending Tim Hortons Brier champ Brad Jacobs (5-0) of Sault Ste. Marie, Ont., will push towards a spot in the Tim Hortons Roar of the Rings final when they take to the ice tonight, with a berth in Sunday’s 2 p.m. final on the line. All draws for the Tim Hortons Roar of the Rings will be televised live on TSN/RDS2, the official broadcasting partner of the Season of Champions. Live scoring and standings are available at: www.curling.ca/scoreboard/ To purchase tickets to the Tim Hortons Roar of the Rings, presented by Monsanto go to: www.curling.ca/2013roaroftherings-en/tickets/ The French version of this story will be available at www.curling.ca/2013roaroftherings-fr/ as soon as possible.