The day you get to pack your curling shoes in your carry-on baggage and take off on a plane is an extremely exciting “first”, one many junior curlers experience the first time they earn the right to represent their province. 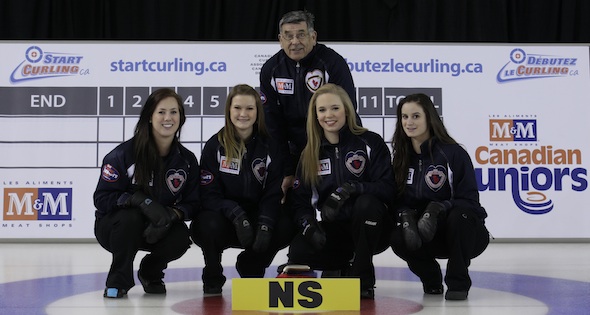 This adventure is often the same experience for curlers across the country: the team wakes up incredibly early and everyone gets stressed out about his or her bags being too heavy. Getting your team through security is usually an adventure on its own. It’s these junior curling memories, of getting to travel and go on exciting adventures that many curlers, including myself, love the most. One of the wonderful things about our amazing sport is the fact that it can take you across your province, across the country and even across the world. Road trips and travel are an integral part of our sport. Learning to travel and enjoy the journey is one of the many life lessons our sport teaches young curlers across Canada. On the weekend of Nov. 14-17, four curlers and their coach from Truro, N.S., travelled to Brandon, Man., for the Sun Life Junior Curling Challenge. The reigning Nova Scotia junior woman’s champion rink skipped by Mary Myketyn-Driscoll took flight on Thursday morning for an exciting adventure. Myketyn-Driscoll and the rest of her rink, comprising third Taylor Clarke, second Mackenzie Proctor and lead Sarah Sears, faced a tough field in Brandon competing against the likes of 2012 Junior National Champion Jocelyn Peterman of Alberta and two-time Manitoba Junior Champion Shannon Birchard. The girls battled hard and finished second in their pool before losing out in their crossover game. 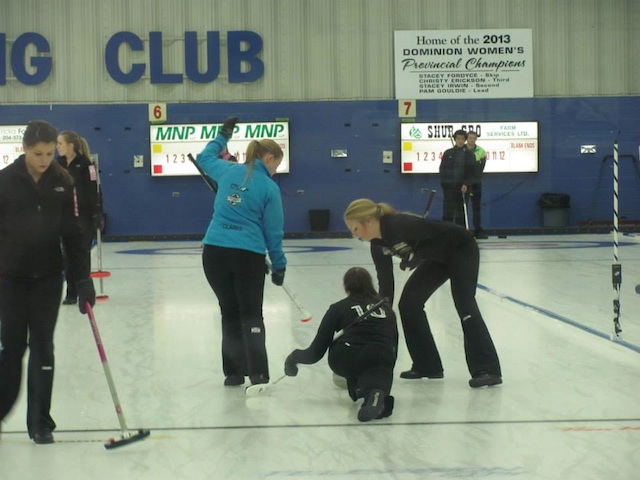 On the ice at the spiel in Brandon, Man. Sarah Sears is throwing, while Taylor Clarke and Mackenzie Proctor sweep (Photo courtesy Taylor Clarke)

Myketyn-Driscoll said the competition in Brandon was fantastic and they were excited to have had the opportunity. “I thought it was a great opportunity for us to get under our belts,” she said. “We needed to play more teams that are new to us and really push ourselves to compete with teams from out west. It was great ice to play on and great competition..” The girls all agreed that their trip was about much more than just curling. It was an entire life experience, and some of the most memorable parts of the weekend happened off the ice. “The best part of the trip was spending the time together,” Clarke said. “Trips like these always seem more like family vacations than sports trips. Spending the time with Jim (the team’s coach) is also always a highlight I don’t think there is a second that we aren’t laughing or learning while he’s around, god love him for putting up with us!” The girls went to Manitoba to curl, but you can rest assured they got more than they bargained for. On their way back to the airport, after their most successful stay at a hotel yet, as Proctor recounted that, “for the first time no one left anything in the hotel,” they soon found out that the highway to Winnipeg (and the airport) was closed! The girls and coach Jim wound up doing some “off roading” but luckily found their way back. “Going on curling trips never ceases to amaze me in what a small world it really is, when we got lost trying to get to the airport a grandfather from a team we had played went out of his way to show us the back road,” said Sears. Proctor summed up their weekend nicely when she explained jokingly that, “Yes, we had to off-road to get to the airport because the highway was closed, Jim got lost everyday getting to the club, and Mary got searched at the airport, but there is never a dull moment on our team! We will be looking for that next adventure soon!” The girls could talk about the fun they had together in Brandon, for hours and you can easily tell while chatting with them that the memories they created travelling and curling together will stick with them for a very long time. Keep Calm and Curl on! 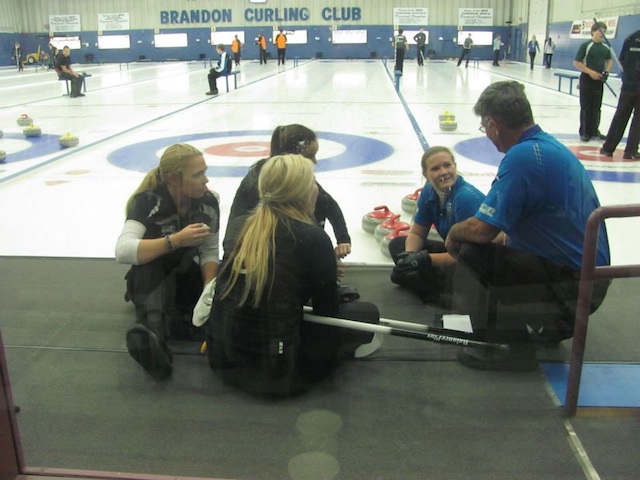 Click here for more stories from Inside Junior Curling.