It took an extra end, but Team Canada men battled their way to a 2013 Winter Universiade bronze medal after defeating Norway’s Markus Hoeiberg 6-5 at the Baselga di Pine Ice Stadium in Trentino, Italy. Brendan Bottcher and his University of Alberta team of Mick Lizmore (third), Brad Thiessen (second), Karrick Martin (lead) and Parker Konschuh (alternate), won a see-saw game that saw both teams scoring with hammer. In the ninth, Bottcher stole a point to go up 5-4 and gain some control. He held Hoeiberg to a single to force the extra end and secure Canada’s first Universiade men’s curling medal since 2003. 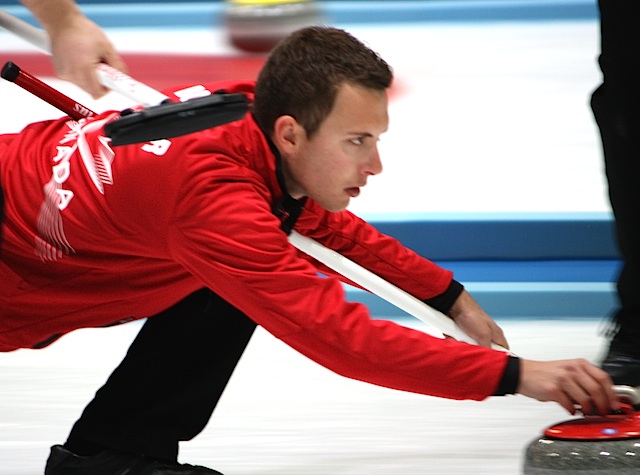 “Definitely a big  accomplishment to come in and win a medal!” said Bottcher, who was celebrating his 22nd birthday.  “We had a rough start to the day, losing this morning, but I’m proud of the guys for coming back and winning a bronze medal and Universiade. The game itself was a back-and-forth the entire way, staying at singles.  In the ninth, we got aggressive, got the steal to tie it and in the 11th, there was a draw to the four foot for the win and we made it.” After qualifying for playoffs with a second-place finish in the round robin, Bottcher and his team met Great Britain’s Kyle Smith in the semifinal on Thursday morning. Canada fell behind 5-1 after giving up three steals in the first half of the game. Bottcher was able to close the gap and trailed 6-4 after eight, but Smith took a single in nine and the Canadians weren’t able to climb back, losing 7-4 and having to regroup for the bronze medal game.  Smith will meet Sweden’s Oskar Eriksson for the gold medal on Friday afternoon. “This team has worked incredibly hard for a couple of years now,” said coach Rob Krepps.  “And really, it was simply a matter of reminding them about the hard work and making sure they did everything they could to leave Trentino with the best possible taste in their mouth.  Turning things around the way they did, from the earlier loss, made me very proud. I’m honoured to be their coach.” A veteran of international competition, Bottcher adds this bronze medal to the gold he won at the junior world championships in 2012 in Ostersund, Sweden. He also led the Golden Bears to a silver medal in Kamloops, B.C., in the CIS-CCA final last March. The Canadian women – Laura Crocker and her Wilfrid Laurier University team of third Sarah Wilkes, second Jennifer Gates, lead Cheryl Kreviazuk, and alternate Breanne Meakin with coach Gary Coderre – finished out of playoff contention at this 26th edition of the world university games. Crocker  won the 2011 and 2012 CIS/CCA national curling titles, and with Wilkes and Gates made the playoffs in four Grand Slam of Curling events last season, as well as in the Alberta Women’s Provincials. The Canadian women had previously reached the podium at each of the first three Universiade tournaments, including a silver-medal finish in 2003 (Tarvisio, Italy), gold in 2007 (Turin, Italy) and silver in 2009 (Harbin, China). 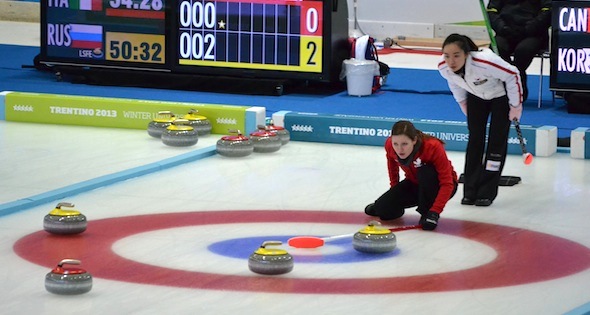 Follow Team Canada on the Canadian Interuniversity Sport websites (English and French) here: https://english.cis-sic.ca/universiade/winter/2013/index https://francais.cis-sic.ca/landing/index Access the 2013 Winter Universiade/Trentino 2013 website here: https://www.universiadetrentino.org/ About the Winter Universiade The Winter Universiade is a biennial international multi-sport event open to competitors who are at least 17 and less than 28 years of age as of January 1 in the year of the Games. Participants must be full-time students at a post-secondary institution (university, college, CEGEP) or have graduated from a post-secondary institution in the year preceding the event. The competition program of the Trentino Universiade includes alpine skiing, biathlon, cross-country skiing, curling, figure skating, freestyle skiing, ice hockey (women & men), nordic combined, ski jumping, snowboarding and short track speed skating. About Canadian Interuniversity Sport Canadian Interuniversity Sport is the national governing body of university sport in Canada. Every year, 11,000 student-athletes and 700 coaches from 55 universities and four regional associations vie for 21 national championships in 12 different sports. CIS also provides high performance international opportunities for Canadian student-athletes at Winter and Summer Universiades, as well as numerous world university championships. For further information, visit www.cis-sic.ca or follow us on: Twitter: https://www.twitter.com/CIS_SIC Facebook: https://www.facebook.com/cissports YouTube: https://www.youtube.com/universitysport