Capital One Million Dollar Button is back for 2014

Capital One Canada and the Canadian Curling Association are once again giving a lucky fan the chance to throw a rock to the button to win $1 million Cdn. 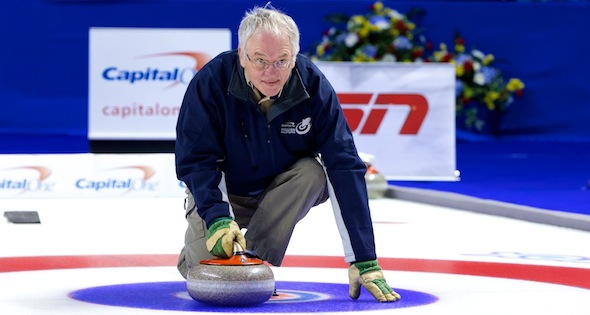 The Capital One Million Dollar Button contest has returned, and it will culminate in March at the 2014 Tim Hortons Brier in Kamloops, B.C., where a fan will have a shot to win $1 million by drawing to the button during the fifth-end break of the gold-medal game on March 9. The attempt will be broadcast live by TSN.

For more details, click on www.milliondollarbutton.ca “Nothing beats the excitement of seeing curling’s biggest fans get their chance to stand on competition ice to shoot for a million dollars,” said Clinton Braganza, Vice-President Brand Marketing, Capital One Canada. “We love giving Canadian curling fans a chance to get in the action and this year will be no exception.  We wish the 2014  participants the best of luck.” In order to win the Capital One Million Dollar Button’s grand prize of a one-time payment of $1 million, the contest’s finalist must successfully deliver a rock from the hack and place the stone within the button on a regulation curling sheet. The contest’s finalist will have just one opportunity to execute the shot. Four lucky semifinalists will win an all-expenses-paid trip for two to the Scotties Tournament of Hearts in Montreal, where they will compete for the finalist position. The person who places the stone closest to the button at that event will become the finalist in Kamloops The finalist will receive an all-expenses-paid trip for themselves and three friends, who will be their own personal “cheer squad.” “We’re very happy to have the Capital One Million Dollar Button contest back as part of our Season of Champions events,” said Greg Stremlaw, the Chief Executive Officer of the CCA. “There’s already so much to offer to our great fans, but thanks to our partnership with Capital One, there’s even more value. Watching our top players make draws to the button is always exciting, but watching someone do it for a million dollars would be amazing.” The Capital One Million Dollar Button contest opened on December 5, 2013, and people can enter once per day until January 11, 2014. Fans can enter or review the full contest rules by visiting milliondollarbutton.ca. About the Canadian Curling Association The Canadian Curling Association (CCA) is the national sport governing body responsible for the development, promotion and organization of curling in Canada. In cooperation with its Provincial and Territorial Member Associations from across Canada, the CCA provides programs and services to curlers ranging from the youngest ‘little rocker’ (age 7 and up), to those participating at ages 70 and over – and from aspiring Olympians to Canadians with special needs, coaches, curling facility operators, ice makers and officials. The CCA also oversees and provides the comprehensive management of the Season of Champions event portfolio; develops and administers the Canadian Team Ranking System (CTRS) for Olympic qualification and organizes and operates the championship system for Juniors (under 20), Seniors (over 50), Mixed, Women, Men, University and Wheelchair. About Capital One With offices in Toronto and Montreal, Capital One has offered Canadian consumers a range of competitive MasterCard credit cards since 1996, when the company first introduced the Platinum MasterCard in Canada. Capital One Canada is a division of Capital One Bank, a subsidiary of Capital One Financial Corporation of McLean, Virginia (NYSE: COF). Capital One is committed to promoting curling by supporting the in-school curling program, Capital One Rocks & Rings, which has already introduced the sport of curling to over 500,000 Canadian kids.