LAS VEGAS — It’s all tied up going into the evening draw of the 2014 World Financial Group Continental Cup at the Orleans Arena. 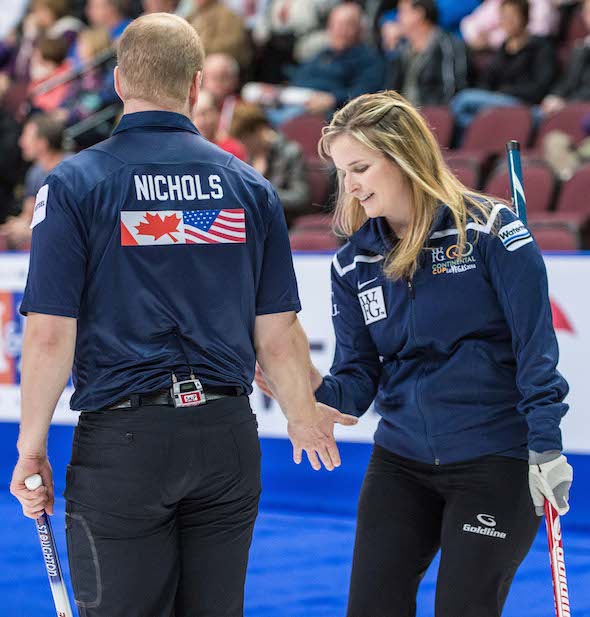 After Team World won two of three traditional team games in the Thursday morning draw of curling’s version of the Ryder Cup, Team North America did the same in the afternoon mixed doubles slate. That left each side with three points in the overall standings; a total of 60 are available, with the first team reaching 30.5 points taking possession of the WFG Continental Cup. The Winnipeg duo of Jennifer Jones and Mark Nichols set the tone on Thursday afternoon, racking up a 9-2 Team North America victory over the Swedish partnership of Niklas Edin and Christina Bertrup. Jones and Nichols stole one in the first, two more in the second and two more in the third. The Swedes opted in the fourth end to give the hammer to Team North America in an attempt to reverse the momentum, and it didn’t work; Jones and Nichols scored three more and the result was never in doubt from there. “He (Nichols) was amazing,” said Jones. “We had so much fun out there – he made my job easy. Mixed doubles is a ton of fun to play, I love playing it. Any more medals that we can get in the Olympics (there is a drive to have mixed doubles included as an Olympic discipline), I’m all for it. I think it’s a great format and maybe in the future we’ll be able to play in it.” Another all-Winnipeg pairing — Jeff Stoughton and Kaitlyn Lawes — had to work harder for its victory. Lawes had to draw to the full eight-foot with the last rock of the game for an 8-7 Team North America win over Team World’s Swedish duo of Sebastin Kraupp and Maria Prytz. Team North America led 6-2 after four ends, but the Swedes scored three in the fifth and two more in the seventh to knot the score and set the stage for Lawes’ game-winning shot. “That encouragement (from the spectators) really made me sweep,” said Lawes after the game. “That was a pretty exciting finish to our game. The exciting thing is that at the Continental Cup last year we started off with two losses and a tie in the first round, so I said to our team: ‘We’re actually in a better position than last year,’ so things are looking good.” 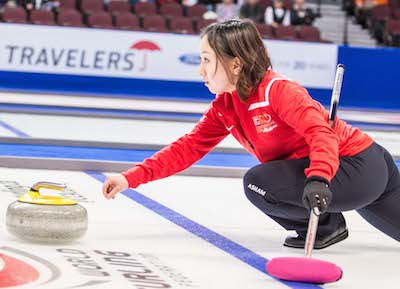 Team World managed to salvage one point out of the draw thanks to the combination of Christoffer Svae (Norway) and Satsuki Fujisawa (Japan). Svae and Fujisawa took three in the first end and three more in the third and sailed to a 13-1 win over Team North America’s Jeff Isaacson and Debbie McCormick. “I enjoy playing mixed doubles, especially at this event because it’s more about fun and entertaining,” said Svae. “The game itself is challenging, more so than normal curling, especially with someone you have never played with before and when there’s not much sweeping going on because the ice gets tracky. So for people at home, don’t expect us to shoot 90-95 per cent which we sometimes do during normal games. It’s a great game if you shoot 65 per cent (in mixed doubles), so that’s the challenge.” Thursday’s schedule concludes with a 7 p.m. (all times Pacific) draw featuring traditional team games, including a rematch of last year’s Ford World Men’s Championship gold-medal game between Team North America’s Brad Jacobs of Canada and Team World’s Edin, who prevailed over Jacobs last April in Victoria. There are three draws on Friday: traditional team games at 8:30 a.m. and 7 p.m., sandwiched around the singles competition at 1 p.m. For the six mixed doubles and six singles matches, one point will be awarded for each victory, one-half point if tied. There will be 18 team games (nine men’s and nine women’s) played, each worth one point for a win and a half-point for a tie. All games are eight ends and there are no extra ends.  There will also be six skins games (those matchups will be decided on Saturday), with each game worth a total of five points to the winner. For ticket and other event information, visit www.curling.ca/2014continentalcup-en/ For the complete schedule, go to: www.curling.ca/2014continentalcup-en/draw-schedule/ TSN (RDS2 in French), the exclusive television network for the CCA’s Season of Champions, will provide complete coverage of the WFG Continental Cup.