A 7-6 win over British Columbia’s Kalia Van Osch means Rocque, third Keely Brown, second Taylor McDonald, lead Claire Tully and coach Amanda-Dawn Coderre will wear Canadian colours at the World Junior Curling Championships, which begin Feb. 26 in Flims, Switzerland. It was Alberta’s seventh Canadian junior women’s title, and first since Jocelyn Peterman of Red Deer won in 2012 in Napanee, Ont. “We’re really excited,” marvelled Rocque, a third cousin to legendary Alberta lead Marcel Rocque. “No kidding, it’s a dream come true, for sure. It honestly hasn’t hit me, and it probably won’t for a couple days. It’s just so surreal right now.” Alberta never trailed on Saturday night, opening the scoring with a deuce in the third end, holding B.C. to one in the fourth and then padding its lead with a fifth-end deuce. But Van Osch — whose Nanaimo/Delta team was rounded out by third (and younger sister) Marika Van Osch, second Sarah Daniels, lead Ashley Sanderson and coach Jim Newlands — struck back with a lovely double takeout to score a game-tying three in the sixth. Alberta restored its lead immediately with a deuce in the seventh — a key factor, said Rocque. “That was really big for us,” said Rocque, as text messages (111 in the moments following the game) piled up in her mobile phone. “It was really important (to keep the momentum); the girls played great and we didn’t give up; we kept plugging along.” 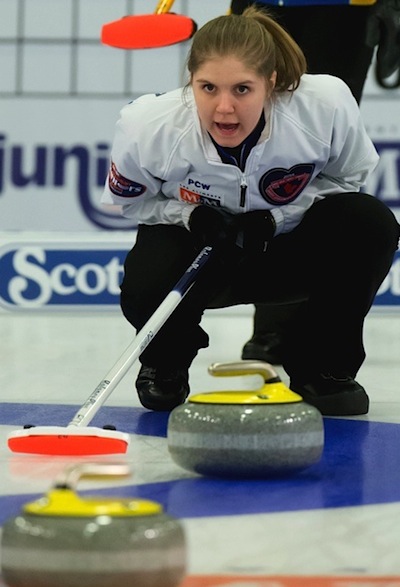 B.C. came back to tie it with two in the eighth — it could have been three but Kalia Van Osch was heavy with her last draw. Alberta blanked the ninth end to carry hammer into the 10th. A double peel from McDonald kept things wide open, but Rocque missed on her first delivery, a peel attempt that left a B.C. rock in the top 12-foot. Van Osch was perfect on her draw weight, but couldn’t bury her inturn draw, giving Rocque a nearly wide-open inturn hit for the Canadian title. “So close,” said Van Osch. “It was as close as we could make it and she made the last shot for the win, and that’s all you ask for as a skip. But it was an amazing experience. The girls performed so well the entire week; they played amazing, and it was just a wonderful time. Nationals is something every junior curler wants to take part in, and we’ve all had the opportunity to that this year. “They’ll be a great team at worlds and a great representative for Canada,” added Van Osch. “We wish them all the best.” Nova Scotia’s Mary Fay team from Chester (third Jenn Smith, second Karlee Burgess, lead Janique LeBlanc, coach Andrew Atherton) captured the bronze medal. Nova Scotia bowed 8-4 to B.C. in an extra end in the semifinal earlier on Saturday. The men’s playoffs are set for Sunday at Queens Place Emera Centre. The semifinal at 9:30 a.m. features Alberta’s Carter Lautner (Cagary) against New Brunswick’s Rene Comeau, with the winner playing Manitoba’s Braden Calvert at 4 p.m. (TSN/RDS2). Canada has won a leading 17 world junior men’s titles since 1975 and eight women’s crowns (one behind Scotland) since 1988. The last Canadian teams to win world junior titles were skipped by Saskatchewan’s Marliese Kasner (Miller) in 2003 in Flims, Switzerland, and by Alberta’s Brendan Bottcher in Östersund, Sweden, in 2012. For the second consecutive year, the competition format involves all 14 Member Associations of the Canadian Curling Association (10 provinces, plus Northern Ontario, Northwest Territories, Nunavut and Yukon). This story will be posted in French as soon as possible at https://www.curling.ca/2014juniors-fr/ The full scoreboard can be viewed at www.curling.ca/scoreboard