By Jennifer Jones (Team Canada skip) — One thing about our team is that we like our routines. We’ve travelled to some amazing places over the years, like South Korea, China, Switzerland and now Russia. And one thing that doesn’t change is that every morning, we have toast and peanut butter! So that’s what we did this morning before our game against Sweden. 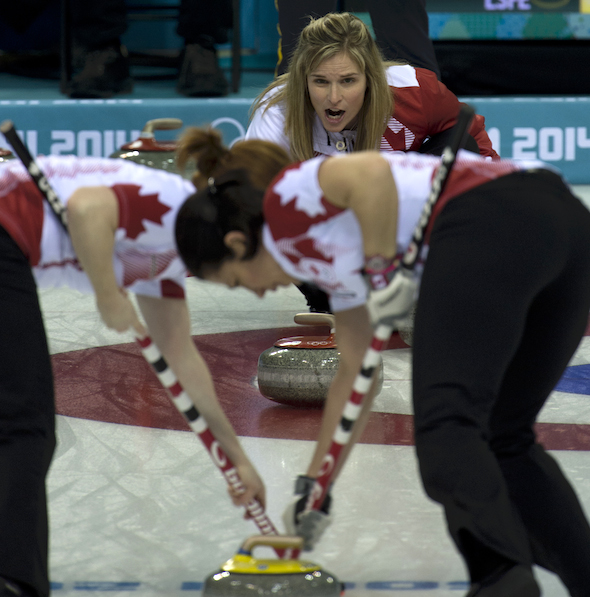 My alarm was set for 6:15 a.m., and after our showers, we went over to the athletes’ lounge here in the Canadian Athletes’ Village and had, yes, toast and peanut butter and some fruit! Then we walked over to the rink for our game. That routine won’t change. It happens everywhere. I find we have to get up a little earlier here because we don’t have the food right in our room (we usually pack our own toaster!). But it’s only 15 more minutes — that’s OK. We’re at the Olympics! 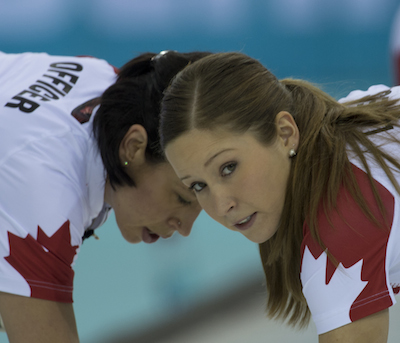 The girls really played great today against Sweden and made my job so easy. I was actually really surprised when the media told me that I had a 100% game. I never keep track of it. But it’s amazing to have a really comfortable feeling with the ice, and I feel like I know where to put the broom and the weight I need to throw for the ice. You can’t ask for a better feeling as a player — like any time you get in the hack you’re going to make the shot. And right now it feels like every time I put the broom down for the girls, they’re going to make it. The same goes for me. I felt like we had a really good grasp on the ice yesterday when we played China, so that makes it easier coming into today. We had a really good practice and everything kind of went from there. We’re just having the time of our lives, and I think that really shows when we’re on the ice. We’re soaking up everything the Olympics have to offer, and just putting it on the ice as well. 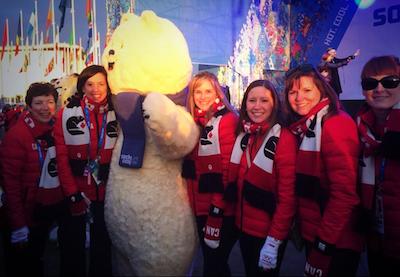 Giving some Team Jones love to the Sochi 2014 mascot!

We have amazing rooms in the Athletes’ Village. We have a three-bedroom apartment, and it’s beautiful. We have a lounge area, and we’re able to watch the CBC Olympics coverage on our Slingbox. Then, every night before bed, I can look out my window at the Olympic torch. We couldn’t ask for a better first Olympic experience. We really appreciate the support we’re getting back home and we’re loving that curling is getting so much exposure around the world! Be sure to get up early on Wednesday when we play Eve’s team from Great Britain. We play them at 5 a.m. Eastern time, which is 4 a.m. in Winnipeg, and the game will be on TSN. We’re going to the mountains now. It’s a little cloudy, but we’re hoping it clears up by the time we get there. We want to soak up the beauty of Russia and cheer on our Canadian teammates! (This is part of our series of athlete blogs from the Winter Olympics in Sochi; this story will be posted in French at www.curling.ca/fr/ as soon as possible)