By Janet Arnott (Team Canada coach) — It was good to get back on the ice today at the Ice Cube, and the girls played very well to beat Japan this morning. The Japanese team gave us a very good test, but we managed to get it done in the end! 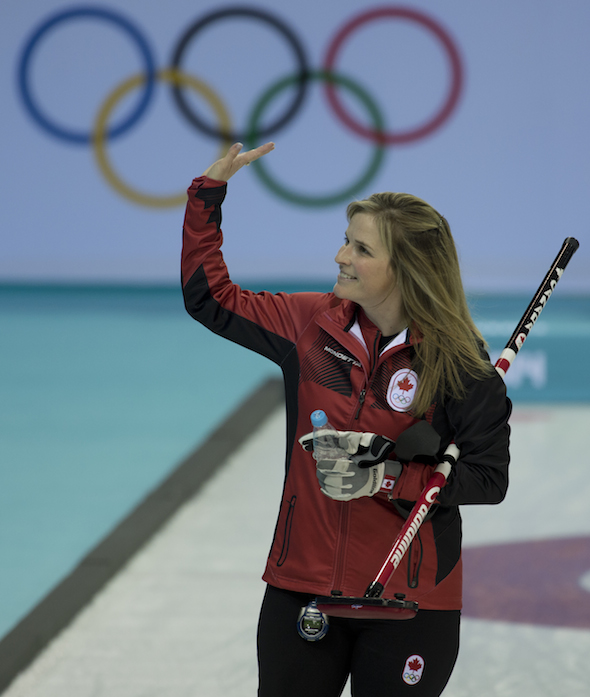 We had the day off yesterday, but we were still busy. The team visited the CBC studio and did some interviews. And then last night, we were at Canada Olympic House for a reception put on by the Canadian Curling Association with friends and family. It was a nice break in the middle of the round robin. 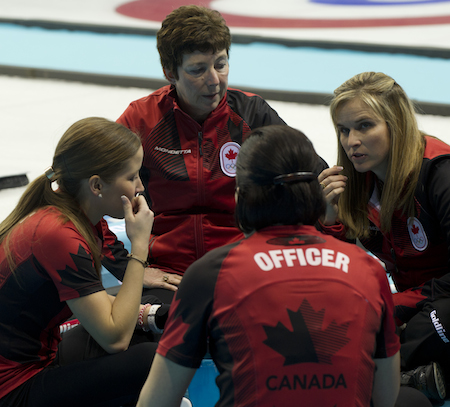 Coach Janet Arnott and Team Canada during the fifth-end break.

I’ve been coaching these girls since 2006. When I started coached them, who could have seen that we would be here in Sochi today on a beautiful, sunny winter day with palm trees all around us? I knew they were a great team with an awesome work ethic, and their determination amazes me. So I’m not surprised that this team made the Olympics. But it was one level at a time for us, the nationals, the worlds — one step at a time. We’re still learning as a team. We’re constantly tweaking and improving, but they don’t surprise me, because they’re willing to make changes and learn from things. They’re always willing to grow, which is just awesome. And because of that, I think that’s why they’ve continued to be on top of their game When I think about the growth and changes since 2006 and how we’ve approached different things? Everything we’ve dealt with, we’ve looked at it as an opportunity to grow and improve, and it’s been just a great mindset. It’s constantly been a development. And I believe that right now, they are at the top of their game. Honestly, there are not many stones that have been left unturned. The little things we’re finding right now are just so minute, and the timing is perfect. Everything has been amazing for me here in Sochi. I’ve been pleasantly surprised by the entire event. People are constantly asking me, is there anything you could possibly be wanting, and there’s nothing. Absolutely nothing. Everything is perfect. 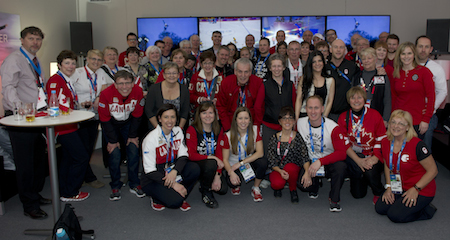 I’m staying in the Athletes’ Village with my sister Connie Laliberte, who has been helping us with some advance scouting of other teams. She has been around the team in this capacity for number of events for us, so for, having that person that I can share information and get feedback from has been awesome for me. And from a personal standpoint? Connie and I are very close anyways, as sisters, but curling has been over and above that, so it has been great to share this experience, as well as all the other ones, with her. Her sense of humour is quite interesting, even in tense situations. It’s incredible to share this with her. I’m very fortunate. We have the afternoon off, and then we’ll be back on the ice tonight against the Russians, so it’ll be a very loud building! You can watch the game at 10 a.m. Eastern on TSN2! Cheer loud! (This is part of our series of athlete blogs from the Winter Olympics in Sochi; this story will be posted in French at www.curling.ca/fr/ as soon as possible)