By Paul Webster (Team Canada Team Leader) — This is my third Olympics with the Canadian curling teams, and in many ways it’s already very rewarding.

The boys have won four straight, and the girls have clinched first place in the round robin after beating Russia tonight. You never know what’s going to happen in an event, and the teams don’t know because they’ve never been in an Olympics. I’m extremely proud to see how they’ve performed under the pressure. It would be extremely hard; I couldn’t fathom doing what they’re doing right now in the pressure-cooker that is the Olympics. They’re both showing that they belong here and they’re both doing all the right things, and showing that Canada belongs on the world stage. I’m excited to see what happens in the next few days; Brad’s team can clinch a semifinal berth tomorrow morning by beating the U.S., combined with a loss by Norway. Off the ice, the planning process for Sochi began the moment the Games were awarded here. I think the challenges coming into this Olympics were that there were so many what-ifs that we knew were on the ground here in Sochi, and we had to wait until we got here to answer them. And in defence of the Sochi 2014 organizing committee, this has been an extremely easy Olympics in terms of logistics and management. I don’t think you could have a better setup for our athletes and coaches in terms of our venue and access to our residence in the Village. The only thing you could maybe talk about is the dining hall being a little bit of a walk, but even that’s not a big deal. The food has been great, and the athletes are loving it. The Canadian Olympic Committee hit it out of the park for us with our setup in the Athletes’ Village, and knock on wood, it’s been quite easy for us. This is the first time the curlers have been in the Athletes’ Village since 1998, and just being a part of the whole Olympic atmosphere — you can’t NOT get excited about the whole Games. Even in Vancouver, the rink stood on its own away from the other venues, so there were many days where we’d just go from our rental house to the venue and you wouldn’t see other parts of the Olympics other than on TV. This setup is amazing, and you’re right in the heart of it. Once the logistical details are taken care of on a daily basis, I’m able to do some scouting ands rock-charting for the men’s team, which is a job I do at the world men’s championship every year. We tell the guys that we’re just trying to find that one to one-and-a-half percentage point that might help them win a game. We already know a lot of these teams, which helps. We can watch them three or four times before we play them and get inside their game, and maybe see who’s making a lot of great shots and maybe who’s struggling in a certain position or with a certain shot. 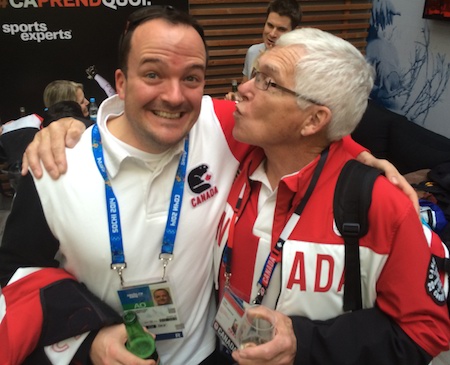 I have to say that the team we have in place here has been superb. Our national coaches, Rick Lang and Elaine Dagg-Jackson, have been working extremely hard for years now to get our teams prepared for this event, and having Jock Tyre co-ordinate our Friends and Family program has been crucial in making sure there are as few distractions as possible for our athletes. We’re all looking forward to seeing our teams perform on Sunday. Brad and the boys play at midnight Eastern against the U.S. on CBC and then again at 10 a.m. Eastern on TSN2 against China. The Canadian women play at 5 a.m. Eastern on CBC against the U.S. Hope you’re all enjoying it at home as much as we are here! (This is part of our series of athlete blogs from the Winter Olympics in Sochi; this story will be posted in French at www.curling.ca/fr/ as soon as possible)