By Elaine Dagg-Jackson (Team Canada national women’s coach) — I knew coming into Sochi that our women’s team would be a contender, but I think they are even better than I expected them to be. 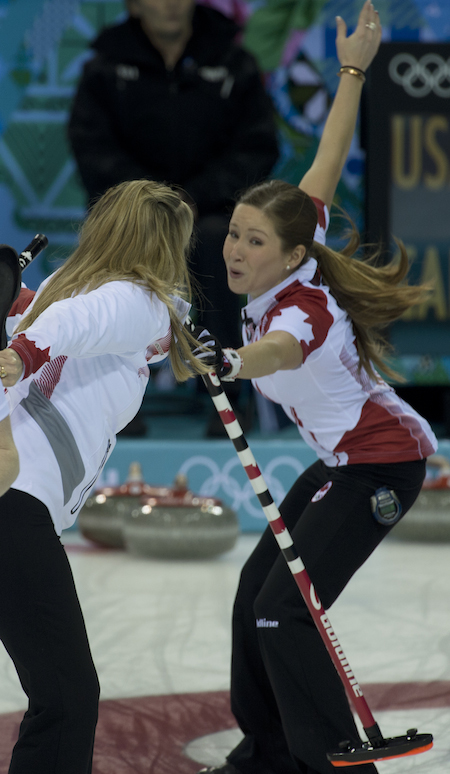 No, they’re not dancing! Team Canada’s Jennifer Jones, left, and Kaitlyn Lawes stumble as they exchange brooms during Sunday’s win over the U.S. (Photo, CCA/Michael Burns)

I’ve been to four world championships with them and I know they’re going to be prepared. But I think this time, they were even more prepared than I expected them to be, and I think there were a lot of reasons for that. This is the third quadrennial that they’ve tried to qualify for the Olympics, so they knew a lot about what they didn’t want to do. Eight years worth of fine-tuning, finding out what makes them perform to their potential — I have to give a lot of credit to team coach Janet Arnott for facilitating all of the things that need to happen for them to reach their best performance. The players identify them, but she ensures that they get brought up at the right time. They go through a systematic process of preparation, and they do it the same all the time. It’s been a great journey of discovery for them, and it’s been a real pleasure to observe that. Even today’s game against the U.S. was kind of a rehearsal for the semifinal on Wednesday. It wasn’t a meaningful game in the standings, so you want to come out and ensure that you are performing the way you want, even though you don’t have to — it’s training to learn how to go out and perform on demand. They may not have all had their very best game, but Kaitlyn Lawes probably had her best game of the week. You look for learning in every single thing you’re experiencing, and I think they’ve done a really good job of that. I’ve been blessed with the opportunity to have been at five Winter Olympics — I was at Albertville in 1992, when curling was a demonstration sport, and then Nagano in 1998, Torino in 2006, Vancouver in 2010 and this year in Sochi. Within the boards, it’s kind of the same as previous events, except for the fact that the competition seems to get better at every Olympics. But away from the ice, every Olympics is unique. 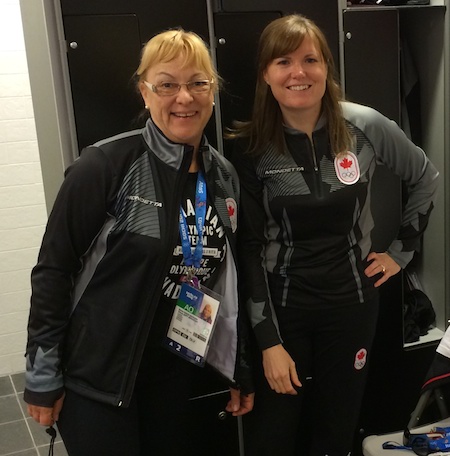 All five were different — each one has its own character and personality. But this one, I think, is the best one in terms of overall enjoyability of the participants in curling, whether they be athletes, coaches or supporters. It’s the intimacy of the event; everything is so close together. In other Olympics, everything was disconnected. Here, we’re right in the middle of everything. You don’t want to get away from it; you just revel being in the middle of it. From the time you wake up in the morning and look out the window and see the flame, and the different colours of the Village — it just has a special feel to it. I feel so privileged to have been able to go to five Olympics. I never anticipated that would go to one, let alone five, so I’m every thankful. I don’t know whether I’ll go to another one, but I’m certain that I’ll help prepare athletes for Olympics of the future. I’m certainly not done. (This is part of our series of athlete blogs from the Winter Olympics in Sochi; this story will be posted in French at www.curling.ca/fr/ as soon as possible)