A winning day for Rocque

Kelsey Rocque rebounded from two straight losses to win both games on the third day of round-robin play at the World Junior Curling Championships in Flims, Switzerland. 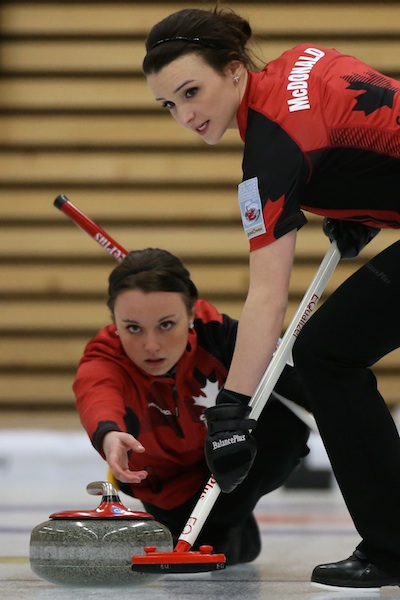 The Canadian women – Rocque, Keely Brown, Taylor McDonald, Claire Tully, alternate Alison Kotylak and coach Amanda-Dawn Coderre – overpowered Sweden’s Isabella Wranaa on Friday morning. The Canadians stole two ends and scored four in the eighth end on the way to an 8-3 victory. “That was a strong performance by the team overall,” said Rocque between games. “I think that win will help our confidence a lot. We had two tough losses yesterday, so carrying that forward, we know we can play well and compete at this level.” Against Switzerland’s Corina Mani, who earlier in the day handed Russia’s Alina Kovaleva her first loss of the tournament, Rocque took control early, scoring deuces with hammer and stealing two ends for a 6-1 lead at the break. The Swiss, playing in front of a hometown crowd, fought back with a pair of deuces, but Rocque held off the charge and won it 8-5. The Canadian women will meet USA’s Cory Christensen (4-2) in their only game on Saturday, then finish the round robin against Scotland’s Gina Aitken and Denmark’s Christine Svensen on Sunday.

“It was a really big win tonight,” said Rocque. “We had a rough day yesterday and knew we had to come back strong today and we played two really good games.

“We were focused a lot more today. We knew it was on the line – we knew we could probably afford one more loss but you don’t want to do it this early. We were just focused on each shot, that was key today,” she said.

In men’s action, the Winnipeg team of Braden Calvert, Kyle Kurz, Lucas Van Den Bosch, Brendan Wilson, alternate Matt Dunstone and coach Tom Clasper dropped a 10-5 decision to Scotland’s Kyle Smith, the 2013 World junior men’s gold medallist. After falling behind 6-1 in the first five ends, the Canadians dug in and were able to generate some offence. They trailed 7-5 after eight, but Smith scored three in the ninth for the 10-5 win. 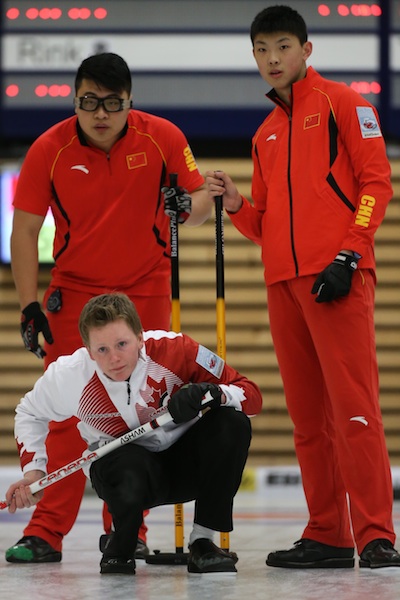 The Canadians came back strong against China’s Tianyu Zhang, who is still looking for his first win. Calvert and crew held their opponents to singles while scoring multiple points with hammer. They made sure of the 8-4 win after scoring three points in seven and another single in the ninth. “It was really good to bounce back and get a win like that,” said Calvert, whose team sits at 2-3. “The guys played really good and it gives us a lot of momentum going into tomorrow.” The Canadians have been adjusting to the level of play and the variety of strategies they’re encountering on the international stage. “It’s definitely challenging,” Calvert said. “The Canadian championships are tough but at the Worlds, there are a lot of different styles of play which is very challenging. These teams are so good at what they do. They each have a different game plan so it makes it interesting playing against these different strategies. It’s caught us off guard sometimes.” Team Canada men will play Norway’s Eirik Mjoeen (5-0) on Saturday morning, before facing Switzerland’s Yannick Schwaller (3-2) in the afternoon. The live coverage schedule is available along with news, live scores and galleries on the event website: https://wjcc2014.curlingevents.com Facebook: https://www.facebook.com/WorldJuniorCurlingChampionships Twitter: @worldcurling and @WCFmedia Twitter Hashtags: #WJCC2014 #curling The World Curling Federation (WCF) is the international sport federation governing the Olympic winter sport of curling and the Paralympic winter sport of wheelchair curling. The WCF is one of seven International Sports Federations currently part of the Winter Olympic programme. It represents 53 Member Associations and is generally acknowledged to direct one of the fastest-growing international winter sports. www.worldcurling.org