Quebec hangs on for Tim Hortons Brier win over Saskatchewan

The two games were on side-by-side sheets Sunday morning but they couldn’t have been more different. 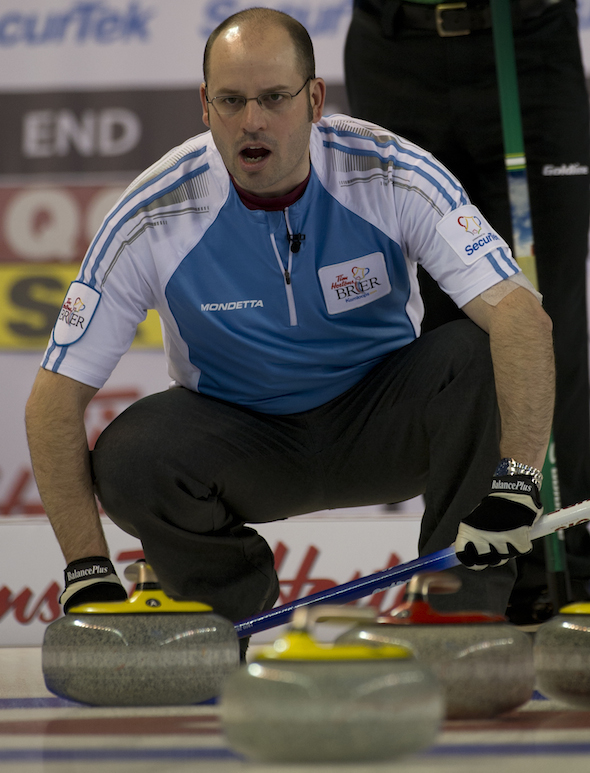 Kevin Koe’s Alberta team stole seven points in the first three ends to jump into a 9-0 lead over New Brunswick while Quebec and Ontario were waging a tit-for-tat scoreless battle at the same juncture of their game during the third draw at the Tim Hortons Brier, presented by SecurTek. Quebec finally broke the goose egg when skip Jean-Michel Ménard made a gentle tap back for two in the fourth but Ontario responded in the fifth; skip Steve Laycock drawing the four foot for a 2-2 deadlock. 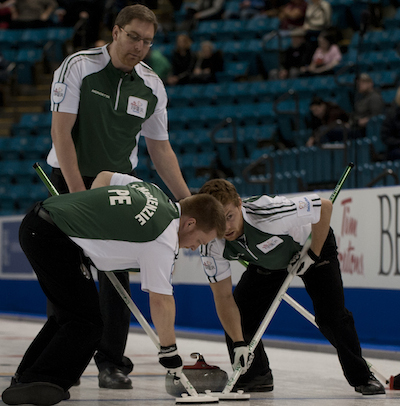 Eventually Alberta went on to a 10-1 seven-end victory while Menard needed to draw the four-foot with his final rock in the 10th to take a 7-5 win. In other early games Jamie Koe of the Northwest Territories/Yukon got his first win 5-4 over Greg Balsdon of Ontario while Eddie MacKenzie and his P.E.I. foursome beat Jamie Murphy of Nova Scotia 7-5. The results left B.C. and Manitoba atop the standings at 2-0. Newfoundland-Labrador, Northern Ontario, Alberta, P.E.I., Northwest Territories/Yukon, Ontario, Saskatchewan and Quebec are all at 1-1. New Brunswick and Nova Scotia are winless at 0-2. Ménard, who skipped Quebec to the 2006 Brier title, was facing two Saskatchewan counters on the edge of the four-foot in the 10th but he calmly slid his final rock inside them to count one for the victory. “A really good game,” he said of the tight battle. “The first two games we played against red-hot skips. Greg Balsdon yesterday played really well. This morning Steve Laycock played well but we were able to manoeuvre rocks to position ourselves for a few deuces.| It’s a nice momentum builder knowing we can play well and finish the games.” The pivotal end was the sixth when Quebec scored three to break open the 2-2 tie. “It was a bad break in six,” said Laycock, whose last-rock attempt to remove two Quebec counters and force Quebec to a single jammed on one of his own rocks in the front of the house. 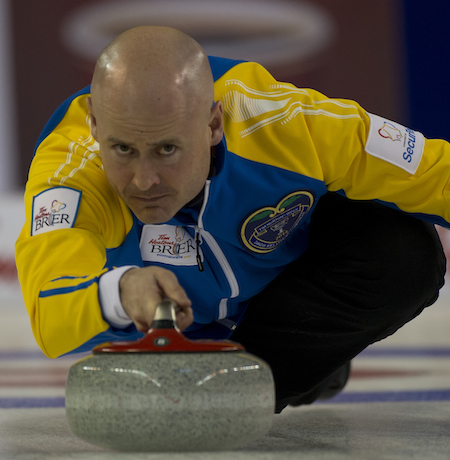 Alberta skip Kevin Koe focuses on his delivery during win over New Brunswick on Sunday.

“Steve was trying a nose hit to make a double takeout … it overcurled a bit and jammed,” said Menard. “I had an open hit for three. We were fortunate because we were probably looking at drawing for one. Alberta, meantime, continued to steal the game from James Grattan and his overmatched New Brunswick foursome. After scoring two in the first, Koe stole two in the second, five in the third and a single in the fourth. With no mercy rule in curling, the teams asked about ending the game at that point. “After the fourth end they asked if they could quit,” Koe said of a discussion with officials at that point. “I think the rule states you have to play eight but they told us we had to play seven, so that’s what we did. I don’t totally understand the rule. There are other games for people to watch. I don’t think they’re watching much of ours.” The Calgary skip and 2010 Brier and world champion said it’s tough playing a game that lopsided so early. “You try to work on a few things. Carter (Rycroft) had some things he wanted to work on. That’s about all you can do.” There are two more draws today, at 1:30 and 6:30 p.m. (all times Pacific). At 1:30 Ontario plays Newfoundland-Labrador, Northwest Territories/Yukon meets Manitoba, Saskatchewan tangles with Northern Ontario and Quebec takes on B.C. All draws for the Tim Hortons Brier will be televised live on TSN/RDS 2, the official broadcasting partner of the Season of Champions. Live scoring is available at: www.curling.ca/scoreboard/?e=19 To purchase tickets to the Tim Hortons Brier, presented by SecurTek, go to: www.curling.ca/2014brier-en/tickets/ The French version of this story will be available at www.curling.ca/2014brier-fr/ as soon as possible.