Kevin Koe and his Alberta team moved to 3-1 in the Tim Hortons Brier presented by SecurTek with a victory that he did not enjoy while a couple of Maritime teams reared up and served notice they can not be overlooked the rest of the week. 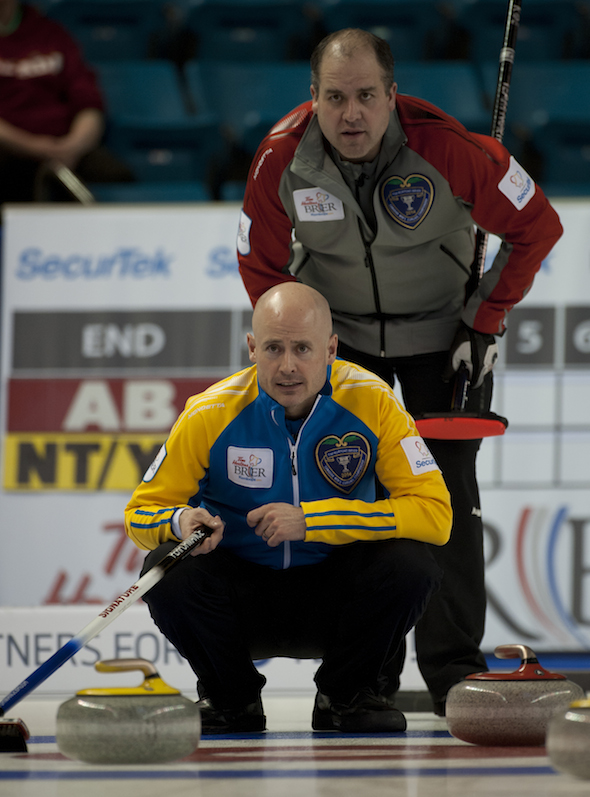 Koe and his rink of third Pat Simmons, second Carter Rycroft, lead Nolan Thiessen, alternate Jamie King and coach John Dunn scored three in the third end en route to an 8-3 win over his brother Jamie Koe and his Northwest Territories/Yukon team and neither sibling was overjoyed afterwards. “It’s never fun beating them because I’m always cheering for them,” Kevin said after running his Brier record against his brother to 4-0. “That being said we needed a win … so we had to try to treat it like another game.” That’s not very easy, however and he admitted it’s emotionally tough when the two meet on the same sheet of ice. “The rest of the teams you love beating up on them versus this one you don’t get a lot of enjoyment out of it.” 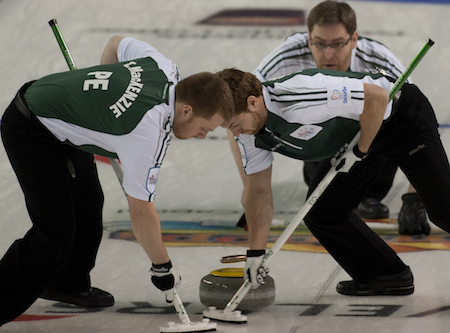 Jamie, at 36 three years younger than Kevin, said the loss “sucks” especially because he and his team didn’t play that well. He had an open hit for two in the first end and had to settle for a single and then gave up the four two ends later when he tried to sneak into the four foot and left Kevin an open hit. “They were lying three and we made a choice on my first shot to go for it and that’s what happens when you don’t make your draws perfectly when you know you’re in trouble and you go for the bailout. These guys make you pay.” In the other sixth-draw matches, Steve Laycock and his Saskatchewan rink moved to 3-1 with a 5-3 win over Jamie Murphy of Nova Scotia, Eddie MacKenzie of P.E.I. also went to 3-1 with a 7-6 win over Jean-Michael Ménard of Quebec and James Grattan of New Brunswick got his first win, 9-6 over Greg Balsdon of Ontario. “It’s nice to see the last two games the team has shown up,” said Grattan after he scored deuces in the first, third and eight ends to get the win and help ease the pain of their opening two losses by a combined 23-6 score. 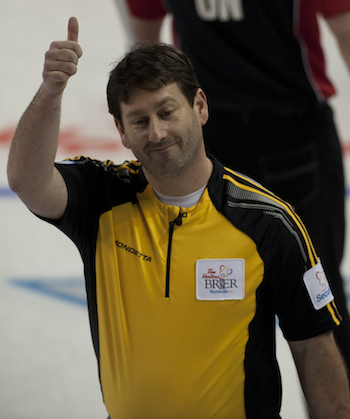 They suffered a lost-rock defeat to unbeaten Jeff Stoughton of Manitoba Sunday evening in a game they felt they maybe should have won. “We had a couple of bad breaks or we win that game … so we went to bed feeling pretty good. Something clicked around the third end of that game last night and we felt pretty good about it.” Meanwhile MacKenzie moved one step closer to maybe getting P.E.I. into the playoffs for the first time since 1996 with his win over Quebec. After giving up two in the first, P.E.I. rebounded with two in the second. He trailed 6-5 going into the 10th after his try for a double in the ninth got only one Quebec stone and left Jean-Michel Menard and easy hit and stick for a steal and the lead. But Menard did almost the same in the 10th, leaving MacKenzie an easy hit and stick for two and the win. “Three-and-one feels good, definitely better than 0-5 or 0-6 as we were the last couple of times (at the Brier).” MacKenzie said. “We’re making a lot more shots. We’re getting pretty comfortable with the ice and that helps.” The results left Manitoba still alone in first at 4-0 followed by John Morris of B.C., Saskatchewan, Alberta and P.E.I all at 3-1, Ontario and Quebec at 2-2, Northern Ontario, Newfoundland-Labrador, Northwest Territories/Yukon and New Brunswick at 1-3 and Nova Scotia 0-4. The 6:30 p.m. PT seventh draw will see Nova Scotia play Northern Ontario, Manitoba meet Alberta, New Brunswick against Newfoundland-Labrador and B.C. play P.E.I. All draws for the Tim Hortons Brier will be televised live on TSN/RDS 2, the official broadcasting partner of the Season of Champions. Live scoring is available at: www.curling.ca/scoreboard/?e=19 To purchase tickets to the Tim Hortons Brier, presented by SecurTek, go to: www.curling.ca/2014brier-en/tickets/ The French version of this story will be available at www.curling.ca/2014brier-fr/ as soon as possible.