Junior men will play for Bronze

Canada’s Braden Calvert and his Winnipeg team will be playing for the bronze medal after an extra-end loss to Switzerland in the Page 3-4 playoff this morning at the 2014 World Junior Curling Championships in Flims, Switzerland. Calvert and his team of Kyle Kurz, Lucas Van Den Bosch, Brendan Wilson, alternate Matt Dunstone and coach Tom Clasper earned their spot in the playoffs by finishing in third place in the round robin with a 6-3 record. 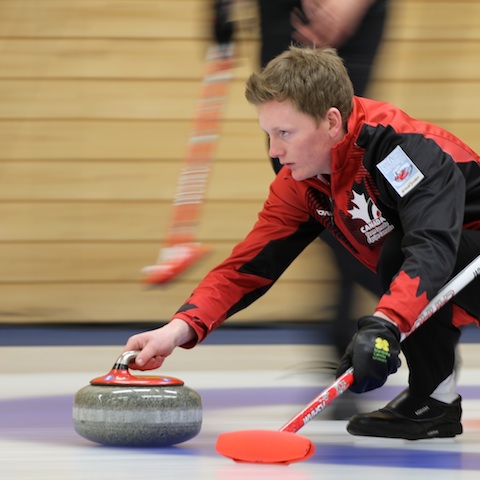 “We’re a little disappointed right now,” said Calvert immediately after the game. “We played a lot better in the second half after getting off to a sluggish start. We didn’t really make the other team make too difficult shots.” Both teams stuck to defence, and after eight ends the score was tied 3-3. Switzerland scored two in the ninth, but Calvert was able to force the extra end with a perfect draw for two on his last shot of the 10th. In the extra end, Switzerland missed a couple of tick shots, allowing Canada to draw around and lie one. With his last, Calvert drew the front of the four-foot to lie two, and Schwaller elected to try the double take-out. His shooter just hung on for the score of one and a ticket to the semifinal. 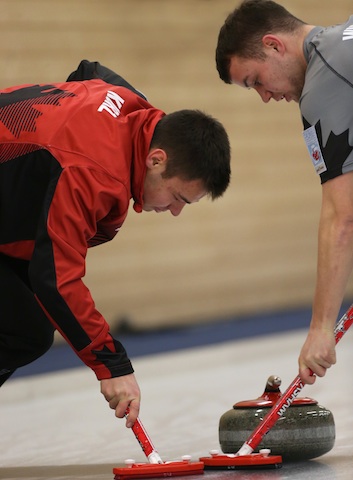 “It was a really, really tough game,” said Swiss skip Schwaller. “It was so close in the end, maybe just a few centimetres in it, just crazy. We played really defensively, that was the key to winning. Canadian curling always involves a lot of stones and guards – we wanted to play defensively and not play their game.” Schwaller will now play Norway’s Eirik Mjoeen, who lost to Scotland’s Kyle Smith in the Page 1-2 playoff game. Smith goes directly to Wednesday’s final, where he will try to defend his 2013 world junior championship title. Canada will face the loser of the semifinal between Norway and Switzerland in the on Wednesday morning at 7 a.m. (ET), and Calvert says the Canadians will be ready. “I think we’ll get rested and fired up to play the bronze medal game,” he said. The Canadian women – Kelsey Rocque, Keely Brown, Taylor McDonald, Claire Tully, alternate Alison Kotylak and coach Amanda-Dawn Coderre – will play for the gold medal on Wednesday morning. That game can be watched online Wednesday at 3 a.m. (ET) on World Curling TV: https://www.youtube.com/WorldCurlingTV The live coverage schedule is available along with news, live scores and galleries on the event website: https://wjcc2014.curlingevents.com Facebook: https://www.facebook.com/WorldJuniorCurlingChampionships Twitter: @worldcurling and @WCFmedia Twitter Hashtags: #WJCC2014 #curling The World Curling Federation (WCF) is the international sport federation governing the Olympic winter sport of curling and the Paralympic winter sport of wheelchair curling. The WCF is one of seven International Sports Federations currently part of the Winter Olympic programme. It represents 53 Member Associations and is generally acknowledged to direct one of the fastest-growing international winter sports. www.worldcurling.org