The front-runners at the Tim Hortons Brier, presented by SecurTek, all scored wins Wednesday morning but won’t have much time to savour the victories before facing another set of tough opponents later today. 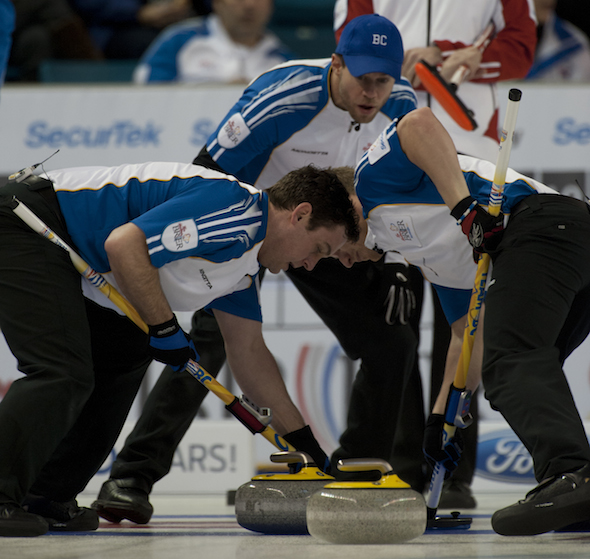 John Morris of British Columbia got past Brad Gushue of Newfoundland-Labrador 5-3, Kevin Koe of Alberta beat James Murphy of Nova Scotia 7-3 and Jeff Stoughton of Manitoba beat Jeff Currie of Northern Ontario 9-6. That left B.C. and Alberta at 7-1 and Manitoba in third at 6-2. In the other morning game James Grattan of New Brunswick beat Eddie MacKenzie of P.E.I. 8-3. Going into the afternoon draw Ontario and Saskatchewan follow the top three in the standings at 4-2, Quebec is at 3-3, Northwest Territories/Yukon 2-4, Newfoundland-Labrador, New Brunswick and P.E.I. at 3-5, Northern Ontario fell to 2-6 and Nova Scotia remained winless in eight games. 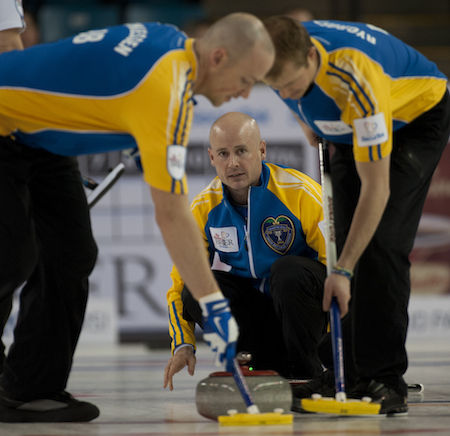 B.C. scored deuces in the second and fifth ends for a 4-1 lead that Gushue couldn’t cut into. “We got our deuce early and managed to keep that two-point lead,” said third Jim Cotter, who throws last stones for B.C. “They made some great shots, where they put some pressure on us and we had to come up with some real doozies to keep them from scoring two.” An example was the ninth where B.C. was in difficulty but managed to hold Newfoundland-Labrador to a single. “We were looking to give up two, maybe even a possible three,” said Cotter, who made two excellent shots. “We got forced into making the double with my last one, managed to force them (to a single) so that was a big hold. Being up two coming home is lot better than being one up.” The loss for Gushue was his fifth and in all probability ensured his hopes for his first Brier championship will end unsuccessfully, as did his previous 10 visits. “That game was a perfect sample of our week,” said Gushue. “I felt like I was facing three, four yellows every time I stepped into the hack. Just never seen a whole lot of shots made in front of me so we never got any ends set up all week. “I had high hopes for today but (it was the) same sort of thing; we just never got rocks set up and made it real easy for John and Jim.” Koe also jumped into an early lead, scoring three in the second end and then never gave Nova Scotia much chance to recover. 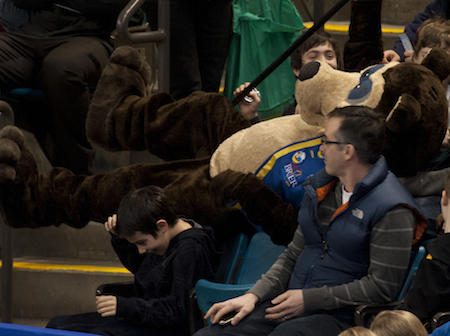 Brier Bear hangs with the crowd at the Interior Savings Centre.

“They just played a bad end really,” Koe said of the second. “We were in control all end and sitting three or four for the most part so sort of a risk-free try for three. He had a real hard double to cut us down to two and just missed it.” The 2010 Brier and world champion said the outcome was the result of his team making all the big shots and Nova Scotia not. “(Murphy) had a shot for three (in the fourth end) to take the lead and missed it and instead we stole. After that point we were in control the rest of the way.” While Alberta gets the afternoon off, B.C. and Manitoba had time for lunch before returning to the ice for two more key games. In the 1 p.m. PT 12th draw, B.C. will play 4-2 Ontario and Manitoba will meet 4-2 Saskatchewan. Alberta plays Ontario in the 6:30 p.m. PT evening draw. “We’re in a good position but we’re going to get focused for our one o’clock game,” said Cotter. “(Ontario) is a great team. We played them at Pre-trials and had a real good game there so we know we’re in tough.” For B.C. and Alberta the task is to not have any missteps their final three games. “Well, that’s easier said than done,” said Koe. “We have Ontario tonight and they only have a couple of losses. They have kind of being flying under the radar so far this week so that will be a big game for us. If we can win that we will be in good shape.” All draws for the Tim Hortons Brier will be televised live on TSN/RDS 2, the official broadcasting partner of the Season of Champions. Live scoring is available at: www.curling.ca/scoreboard/?e=19 To purchase tickets to the Tim Hortons Brier, presented by SecurTek, go to: www.curling.ca/2014brier-en/tickets/ The French version of this story will be available at www.curling.ca/2014brier-fr/ as soon as possible.