Kelsey Rocque and her Edmonton team are bringing home the gold medal after defeating South Korea’s Kyeong-Ae Kim 6-4 in the women’s final today at the 2014 World Junior Curling Championships in Flims, Switzerland. “Honestly, this is unexplainable,” said Rocque minutes after a jubilant on-ice celebration with her teammates. “We came into this tournament really wanting it, and it’s awesome to see all our hard work pay off.” 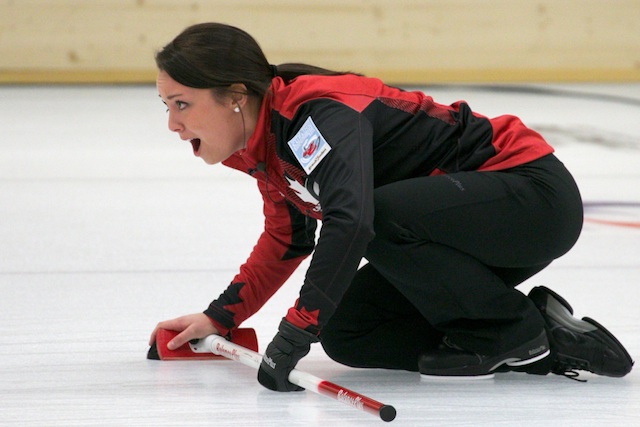 Rocque, third Keely Brown, second Taylor McDonald, lead Claire Tully, alternate Alison Kotylak and coach Amanda-Dawn Coderre are the first Canadian junior women to stand on top of the podium since Saskatchewan’s Marliese Miller (now Kasner) won the championship in 2003. “It was always in the back of my mind but you’ve just got to go out there and take it one rock at a time,” she said about claiming the gold for Canada after so many years. “It’s almost less pressure knowing Canada hasn’t won the gold (in 11 years). It’s awesome to get it again.” Riding a six-game winning streak into the final, Rocque had last-rock advantage because of her win over Kim in the Page 1-2 playoff. Canada started the scoring with a single in the first. Trailing 3-2 after six ends, the Canadians scored a deuce in the seventh, then broke the game open in the eighth by stealing another two points when Kim’s takeout attempt rolled too far. South Korea mounted some offence in the ninth with a delicate in-off to score a single, but Canada kept things simple and hit out for the win. “They are a very strong team,” said Rocque about the silver medallists, the first South Korean team ever to qualify for the world junior championship. “She made a clutch shot in the ninth end and we knew it would be right down to the bitter end with them. It was a well-played game.” “I’m so proud of the girls, they just played great all week and we just had an awesome week,” she said. “I couldn’t ask for anything more.” In the other women’s final, Russia’s Alina Kovaleva defeated Sweden’s Isabella Wranaa 11-4 to claim the bronze medal. The men’s finals get underway at 7 a.m. (ET) today. Braden Calvert and his Winnipeg team of Kyle Kurz, Lucas Van Den Bosch, Brendan Wilson, alternate Matt Dunstone and coach Tom Clasper will be playing Norway’s Erik Mjoeen for the bronze medal. 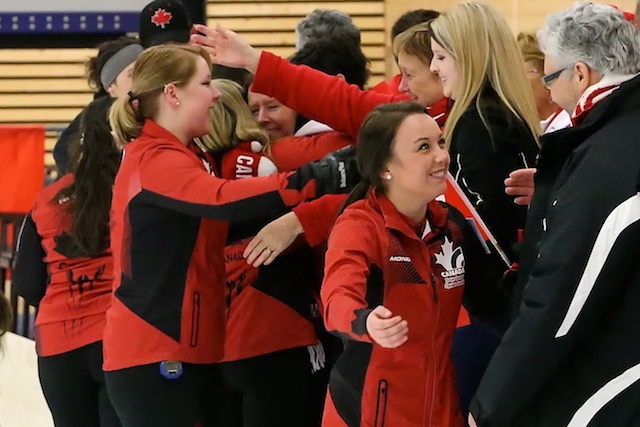 Team Canada celebrates with family and fans after their gold-medal win at the 2014 World Junior Championships in Flims, Switzerland (Photo WCF/Richard Gray)

The live coverage schedule is available along with news, live scores and galleries on the event website: https://wjcc2014.curlingevents.com Facebook: https://www.facebook.com/WorldJuniorCurlingChampionships Twitter: @worldcurling and @WCFmedia Twitter Hashtags: #WJCC2014 #curling The World Curling Federation (WCF) is the international sport federation governing the Olympic winter sport of curling and the Paralympic winter sport of wheelchair curling. The WCF is one of seven International Sports Federations currently part of the Winter Olympic programme. It represents 53 Member Associations and is generally acknowledged to direct one of the fastest-growing international winter sports. www.worldcurling.org