KAMLOOPS — Saskatchewan recovered from an early 4-0 deficit to score two in an extra end to defeat Ontario 9-7 Thursday and inch closer to a possible playoff berth at the Tim Hortons Brier, presented by SecurTek. 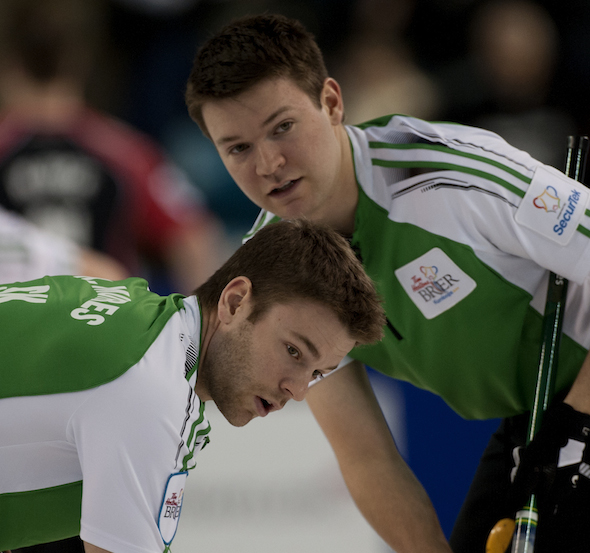 Skip Steve Laycock made a routine hit-and-stick with the final stone to take the victory after Ontario, behind skip Greg Balsdon, had let a 4-0 second-end lead slide away and needed a single in the 10th to force the extra end. The victory moved Saskatchewan to 6-3 and kept them alone in fourth place behind 9-1 Alberta, which defeated P.E.I. 9-6, and Manitoba and B.C., who are tied at 8-2. 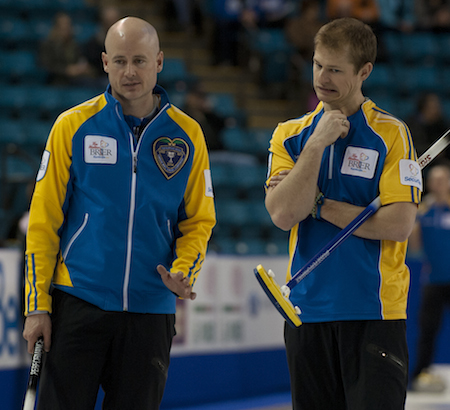 In other games in the afternoon draw, Quebec beat Northwest Territories/Yukon 7-5 and N.B. got past Nova Scotia 6-5. The results left Quebec at 5-4, New Brunswick and Newfoundland-Labrador at 5-5 and Ontario at 4-5 and all needing a lot of help to create a tiebreaker situation. Northwest Territories/Yukon is at 3-6, P.E.I. 3-7, Northern Ontario 2-8 and Nova Scotia 0-10. “That was massive because they’re the team we have to stay ahead of,” Laycock said of the win. “Quebec won their game and are one loss behind us, too, so that was huge; it gives us a bit of a buffer tonight against B.C. Otherwise it was win out.” Balsdon, with third Mark Bice, second Tyler Morgan, lead Jamie Farnell, alternate Steve Bice and coach Jim Wilson, got four in the second when he played a rub off his own stone in the eight-foot to kick an Ontario rock out of the four foot. “You never want to get down four but at least it happened early,” said Laycock, who is joined by third Kirk Muyres, second Colton Flasch, lead Dallan Muyres, alternate Matt Lang and coach Lyle Muyres. “I could see a bit of dejection in the guys’ faces so we had a little meeting at the far end before the third end. I said they’re probably going to be trying to prevent giving up three and give us two because of that, and they did. Then we got the huge break of a steal of two in four and from there it was a fight.” Balsdon came up short of the house with his final rock in the fourth, trying to draw the button. “The steal of two to tie the game, that hurt. I just threw it a little soft and you can’t throw soft out here,” said a dejected Balsdon. “They played well and I missed some really key shots.” 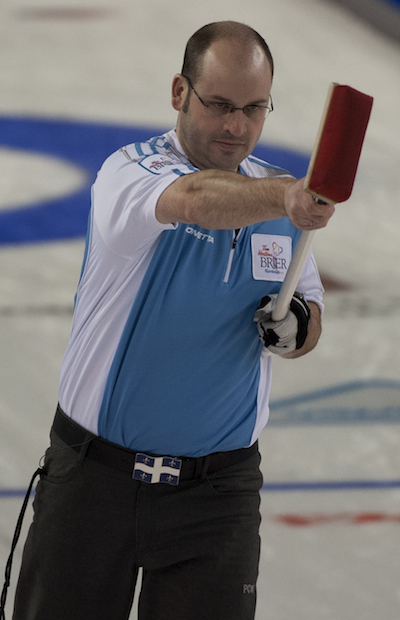 Quebec skip Jean-Michel Ménard celebrates a made shot on Thursday.

Alberta scored four in the first end and two in the third, but just when they gained control they gave up three in the fourth and had to play tough the rest of the way to get their key victory. “We made some great shots and the angles were all in our favour,” Koe said of the first end. “It could have even been more, had chance for five or six but it was quite risky and we didn’t feel it was worth it. If you get four in the first end you should never lose.” Koe flashed an attempted double in the fourth to allow Eddie MacKenzie an open draw for three. “After that they started making a lot of shots, but definitely we could have made it easier on ourselves.” Alberta is guaranteed a playoff berth and will ensure themselves of playing in the Page playoff 1-2 game Friday night with a win Friday morning against Quebec. In the 6:30 p.m. PT draw B.C. plays Saskatchewan and Manitoba meets Ontario in two key matches that could uncomplicated the playoff picture. All draws for the Tim Hortons Brier will be televised live on TSN/RDS 2, the official broadcasting partner of the Season of Champions. Live scoring is available at: www.curling.ca/scoreboard/?e=19 To purchase tickets to the Tim Hortons Brier, presented by SecurTek, go to: www.curling.ca/2014brier-en/tickets/ The French version of this story will be available at www.curling.ca/2014brier-fr/ as soon as possible.