KAMLOOPS — The fans in the nearly full Interior Savings Centre were chanting “Jimmy, Jimmy, Jimmy” by the fourth end Friday evening as they watched their local hero, Jim Cotter, pull off a highlight reel shot that sparked B.C. to a 9-5 win over Alberta that moved them into Sunday’s final of the Tim Hortons Brier, presented by SecurTek. 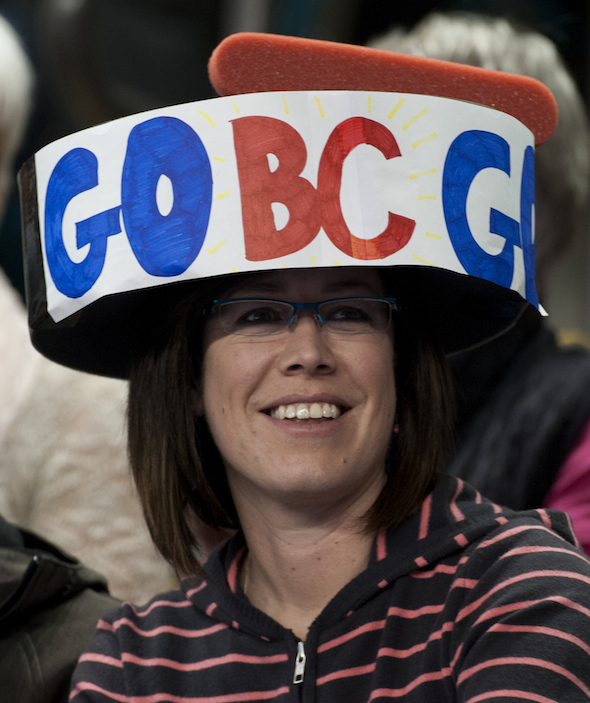 The fans were out in full force on Friday to show their support for Team B.C. at the Tim Hortons Brier. (Photos, CCA/Michael Burns)

“Such a great vibe in here. Jimmy being the hometown boy, such a great vibe and something special to be part of,” said B.C. skip John Morris. The loss drops Kevin Koe and his Alberta foursome into Saturday’s semifinal. Koe and his team struggled early with the skip coming up short with last-rock draws in both ends to allow B.C. to score two in the first and steal one in the second. 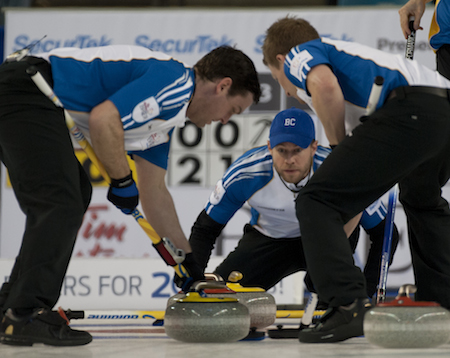 Then the Cotter show began. The Vernon resident, who grew up in Kamloops, made an angle-raise double takeout in the third that forced Alberta to take a single. The B.C. rink of skip John Morris, third Cotter (who throws last stones), second Tyrel Griffith, lead Rick Sawatsky, alternate Jody Epp and coach Pat Ryan, couldn’t seem to miss as they became the first B.C. rink to reach the Brier final since Greg McAulay in 2000. Even when their shots weren’t perfect, the results mostly were. In the fourth Cotter ran back his own guard, rubbed off a second guard and went into the house, spilling out two Alberta stones from the four-foot and leaving B.C. sitting three. He then made a routine raise takeout of Koe’s last rock to score three for a 6-1 lead. “We got a little fortunate with it,” admitted Cotter. “We knew if we caught it a little thick we would get some action back. We knew if we caught on that one side, we’d get that result. We hit it really good and it worked out great.” Koe said that shot was a good indication it was going to be B.C.’s night. “For sure. There’s no chance they knew that was going to happen,” said the 2010 Brier and world champion. “The way it ended up we were in trouble. But I had a good freeze coming in and it just picked about a foot or two short of the rock. If it doesn’t do that it freezes right in and would have been a lot harder shot, probably only be able to get two.” 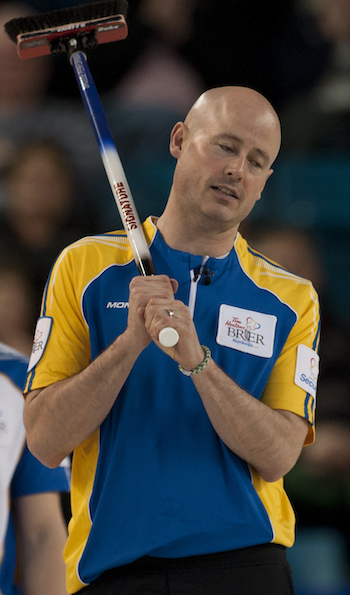 Cotter had a rare half-miss in the fifth, getting only the front end of an attempted double and that left Koe draw for two that silenced the crowd. But B.C. came right back with a pair in six. If Koe and his crew of third Pat Simmons, second Carter Rycroft, lead Nolan Thiessen, alternate Jamie King and coach John Dunn hadn’t concede it wasn’t their night by then they got another sign in the seventh. Simmons slipped while sweeping and kicked what would have been a good guard, leaving Morris an easy takeout of Alberta’s shot rock. Still, Koe had a chance for two with last rock but his shooter rolled out on an attempted double takeout. “I struggled a bit, on the wrong side of the inch tonight,” said Koe. “They weren’t missing much so we were in trouble when we weren’t playing our best. Today wasn’t our day but fortunately we put ourselves in position where we have another life. We’ve done well in the semis before, we’re won both that we’ve played in.” Alberta stole a single in the eighth but gave up a single in the ninth and shook hands. B.C. got into the Page playoff 1-2 game when Alberta was upset earlier in the day by Jean-Michel Ménard of Quebec 7-5. Had Alberta won that game they would have played Jeff Stoughton of Manitoba in the 1-2 game. The Menard win gave Quebec fourth place and that meant no tiebreakers. Quebec will play Manitoba in the Page playoff 3-4 game at 1:30 p.m. PT Saturday with the winner advancing to the 6:30 p.m. semifinal against Alberta. The Page 3-4 loser and the semifinal loser will play for the bronze medal Sunday at 9 a.m. All draws for the Tim Hortons Brier will be televised live on TSN/RDS 2, the official broadcasting partner of the Season of Champions. Live scoring is available at: www.curling.ca/scoreboard/?e=19 To purchase tickets to the Tim Hortons Brier, presented by SecurTek, go to: www.curling.ca/2014brier-en/tickets/ The French version of this story will be available at www.curling.ca/2014brier-fr/ as soon as possible.