KAMLOOPS — Jean-Michel Ménard and his never-say-die Quebec foursome stole three points in the fifth and sixth ends Saturday to knock off three-time champion Jeff Stoughton of Manitoba 7-6 in the Page playoff 3-4 game to advance to tonight’s semifinal at the Tim Hortons Brier, presented by SecurTek. 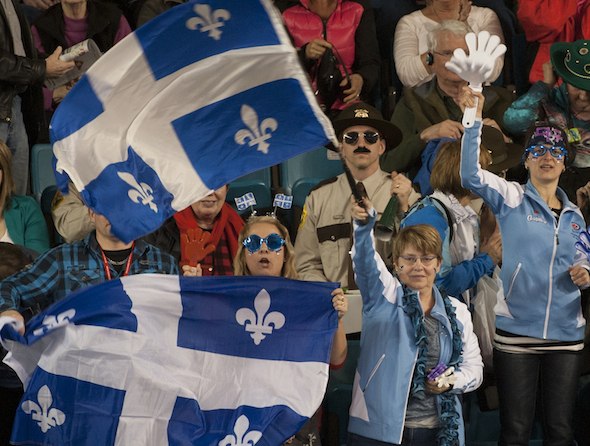 Quebec’s supporters were thrilled with the result of Saturday’s Page playoff 3-4 game at the Tim Hortons Brier. (Photo, CCA/Michael Burns) 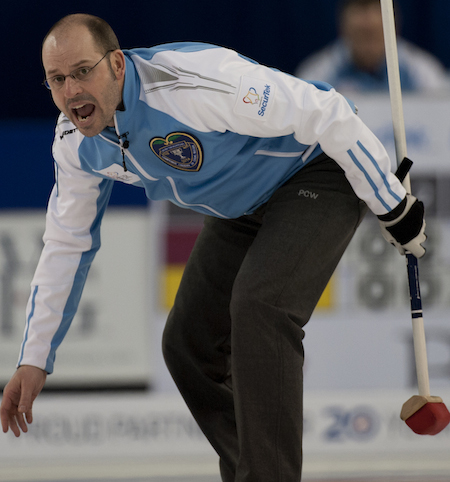 “They get up more for the bigger teams than they do for some of the lesser teams and that’s great for them,” Stoughton said of the Ménard team that beat the top three teams in the round-robin, Manitoba, Alberta and B.C., who all finished 9-2. “They played great against Koe and great again tonight. Whatever it is is working.” Manitoba got the deuce it wanted in the second when Ménard’s first shot wrecked on a guard. creating the chance for Stoughton to set up the two. But Quebec countered in the third with two of its own. Manitoba twice missed on double takeout attempts and Crête executed a difficult triple kill of three Manitoba stones to create the opportunity for the deuce. “He started with a real nice deuce in the second end,” said Ménard. “I thought I made a pistol hit-and-roll but he came back with a beautiful back-12 shot. Put a little pressure on us. But then we were able to generate a deuce. Manitoba continued to struggle with consistency through the middle ends. Mead took out his own counter in the fifth and Stoughton rolled out on a hit-and-stick try with his final rock for Quebec’s first steal. In the sixth Quebec buried shot rock early but Manitoba had a chance for one, Stoughton needing only to draw the four-foot. But his rock slid through, leaving Quebec the steal of two for a 6-2 lead. “The sixth end was the turning point,” said Ménard. “That piece of ice was really, really fast and he got caught and slid through. I got fooled (with his last-rock draw that slid to the back 12) and so did he when he followed me.” Stoughton, who curled a game-low 80 per cent, said his team “blew it in the fifth end. “The fifth end was a terrible combination of shots. We came deep on Mark’s draw, let them make a double. Then Jon bumped ours out, then we missed the hit-and-roll and then I missed the double, then I missed hit and stay for one. So we had them set up for a great deuce, maybe even three in that end. We just didn’t execute.” The sixth he called an “horrendous end” that left him disappointed he missed the chance to score. 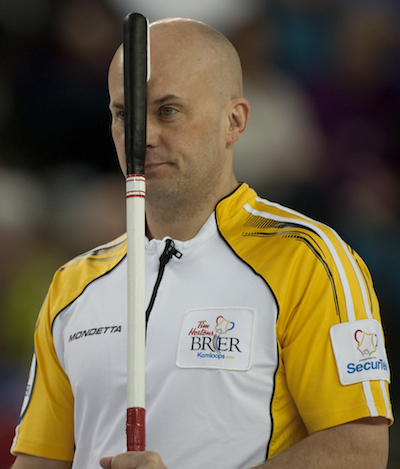 “At least we would have been back in it if we get the one in six, but we couldn’t get the shots together. They made all the shots they needed to make, didn’t have any full shot misses and hit the right side of the rocks when they had to.” The teams traded deuces in the seventh and eighth; Stoughton successful executing a delicate hit-and-stick in the seventh but rolling out on an attempted raise takeout that left Menard a free draw for two. Manitoba got one in the ninth but ran out of rocks in the 10th. “We have to look in the mirror; it wasn’t because of their execution, it was because of ours,” Stoughton said of his crew. “I’ve always said the only way you win is if the other team misses and we were the other team this time. All draws for the Tim Hortons Brier will be televised live on TSN/RDS2, the official broadcasting partner of the Season of Champions. Live scoring is available at: www.curling.ca/scoreboard/?e=19 To purchase tickets to the Tim Hortons Brier, presented by SecurTek, go to: www.curling.ca/2014brier-en/tickets/ The French version of this story will be available at www.curling.ca/2014brier-fr/ as soon as possible.