The Canadian wheelchair curling team picked up from where they left off after yesterday’s big wins over Great Britain and Russia, defeating Sweden 7-4 in Sunday’s action at the Sochi 2014 Paralympic Winter Games Today, they took on the Swedes in a much anticipated contest that featured two of the top ranked teams in the tournament. Canada eventually prevailed in a nail biter of a last end which saw Sweden make its last shot just as the time ran out. Sweden came up short in their attempt to tie the game and Canada now sits 3-0 after winning 7-4. The condition of the ice and “aggressive rocks,” as skip Jim Armstrong describes them, continue to be elements of the game that all teams are finding difficult to adjust to in the rink. “It’s all just part of the game and we adapt and make the best of the surface that is given to us to play on,” said coach Joe Rea. “After all, this is the Paralympic Games and if they told us to play on gravel we would be there, since this is the biggest event the world has to offer for us in our sport.” “The ice maker is doing his absolute best and with support from Sochi’s technical staff they are working long and hard to create the optimum playing surface for everyone, which is a very difficult thing to achieve, given the warm days this past week,” Rea added. “We’re lucky enough to have Jim Armstrong as our skip and if anyone is going to manage this ice, it’s going to be him. He’ll make a silk purse out of a cow’s ear anyway so we are really lucky to have him and he really is our ace in the hole, the way he’s managing this ice.” 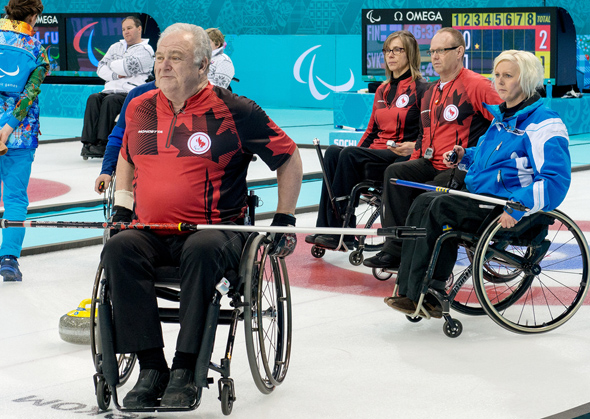 The fourth end was the turning point of the game. The score was tied at two apiece and the ice just in front of the rings was becoming a parking lot with five rocks sitting in a tight cluster. Behind this lay two Swedish stones sitting in the 12 on opposite sides. Ina Forrest’s second shot joined the five stone cluster and Sweden’s third, Ikonen, added a third counting stone to the 12 foot. Armstrong took out that counter, but Sweden was still sitting with two and they had the hammer. Armstrong carefully surveyed the situation and made a beautiful hit and roll that stuck his rock deep in the four foot. The boisterous Canadians in the crowd appreciated that shot. A take out attempt by Sweden last throw missed and Canada was up 3 to 2.

Sweden never really recovered after that fourth end performance and Canada went on to win 7-4. On Monday they take on USA (1-2) at 10:30 and Norway (1-2) at 15:30 (local time).  Canada and Slovakia are the only teams who remain undefeated in round robin play.

For full information about Team Canada at the Sochi 2014 Paralympic Games, please visit paralympic.ca/team-canada. PHOTOGRAPHY: Media are invited to visit photos.paralympic.ca and create an account to be able to download high-resolution photos of Canadian Paralympic athletes at any time, at no cost. For more information, please contact: John Sims Media attaché, wheelchair curling SOCHI Cell: 011-7-938-454-3212 [email protected] The French version of this story will be available at www.curling.ca/2014brier-fr/ as soon as possible.