Canada defeated Korea 10-4 in Day 5 action to secure a spot in the playoffs of the wheelchair curling event at the 2014 Paralympic games in Sochi, Russia. The last time Canada met Korea in Paralympic wheelchair curling action was in 2010 at the gold medal game in Vancouver. So, in a way, today’s game was a rematch of the two powerhouses from four years ago.  The obvious difference this time is the makeup of the Korean team.  While Canada’s team is made up of three 2010 veterans and two newcomers, the Korean team has only one member, Myungjin Kim, from their silver medal squad.  They headed in today’s match with a middle-of-the-pack record of two wins  and four losses. According to Canadian skip, Jim Armstrong, playing Korea always keeps Canada on their toes. ”They kept it exciting,” said Armstrong, who was backed by third Ida Forrest, second Dennis Thiessen and lead Mark Ideson, playing place of regular Sonja Gaudet. “We didn’t mean for that to happen, but it did. They are a great team. We play them a few times every year, and they usually come to Canada every year since they have done some training in Vancouver. We always have a great time together.” 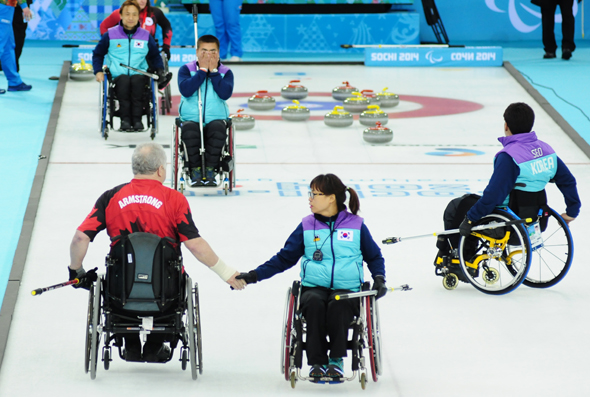 Canada trailed 1-0 after the first end before Armstrong executed a hit for three in the second. The Canadians widened their lead to 5-1 thanks to a two-point steal in the third. Korean skip Jong-Pan pulled it back to 6-4 with a draw for two in the sixth, but his draw attempt in the next end came up short and left Canada with a four-point end.  The Koreans extended the handshake and the game was over in the seventh end with Canada coming out on top 10-4. “Everyone brings something different to the table,” said Forrest about the complete team effort. “We had a lot of rocks in the house so it gives you the opportunity to get more points. That always makes for a better game.” Canada and Russia remain at the top of the round-robin standings with six wins and one loss. ”We are tied with Russia in winning the same amount of games,” said Armstrong. “But we’ve played Russia before and beaten them – so let’s see what happens. It will be great if the ice conditions stay as they are. Then over the next few days, we can just keep practicing perfecting our shots.” Tomorrow Canada plays Slovakia (4-3) at 9:30 a.m. and Finland (1-6 ) at 15:30 (local time) in the Ice Cube. PHOTOGRAPHY: Media are invited to visit photos.paralympic.ca and create an account to be able to download high-resolution photos of Canadian Paralympic athletes at any time, at no cost. For full information about Team Canada at the Sochi 2014 Paralympic Games, please visit paralympic.ca/team-canada.