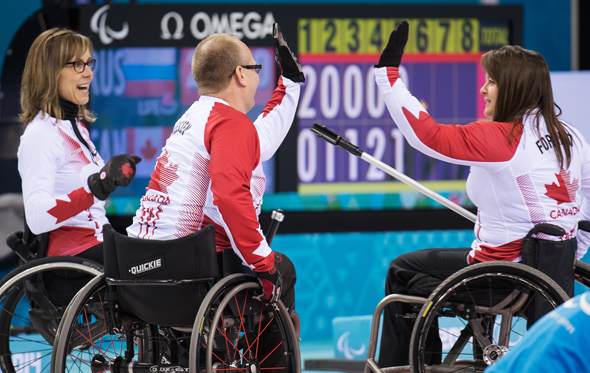 The Canadian team – skip Jim Armstrong, third Ina Forrest, second Dennis Thiessen, lead Sonja Gaudet, alternate Mark Ideson and coach Joe Rea – won a very close semifinal 5-4 earlier in the day against the strong up-and-coming team from China.  This team is comprised of some of the youngest players in the tournament and in fact only one member of the team is over the age of 30.  Armstrong is especially fond of the Chinese team’s youthful exuberance. “They’re real sportsmen on the ice,” he said. “They’re young and they’re going to have a long, long time in the sport. Their country should be very proud.” In the semifinal, Armstrong converted a draw for two with his final stone of the seventh to break a 3-3 tie and give Canada the lead for good. China had a chance to send the game to extra ends, but the Chinese skip was heavy with his final-stone draw, giving Canada the 5-4 win and a spot in the gold-medal game. Canada played their best game of the tournament when it was really needed against the Russians.  The previous days’ issues with the ice had been resolved and Canada jumped into the driver’s seat and posted some the week’s most impressive draw percentages in the 80s. Canada closed the deal in the sixth end when Armstrong  played a very precise takeout on the Russian shot stone and stayed in the four foot. The Russian skip had to hit this stone on the nose to score one but was too slow giving Canada a steal of three.  In the eighth end, the Russian squad ran out of rocks to make a comeback and handshakes were exchanged. “It feels fantastic,” said Forrest. “The game felt so smooth and comfortable.” The team couldn’t say enough about their experience at these winter games and how proud the organizers, volunteers, support staff, officials and especially the other teams should be about they past week of competition. ”I kind of felt for the Russian team. They were playing at home and it was the exact reverse of the situation we were in at Vancouver (2010). You don’t like disappointing a great crowd like that,” said Armstrong after getting his gold medal. The team heads home early Monday morning from Sochi and will land in Canada (Toronto Pearson Airport) later that same day.  You can bet they will be getting some warm smiles and hugs when they arrive as the 2014 Winter Paralympic gold medallists.