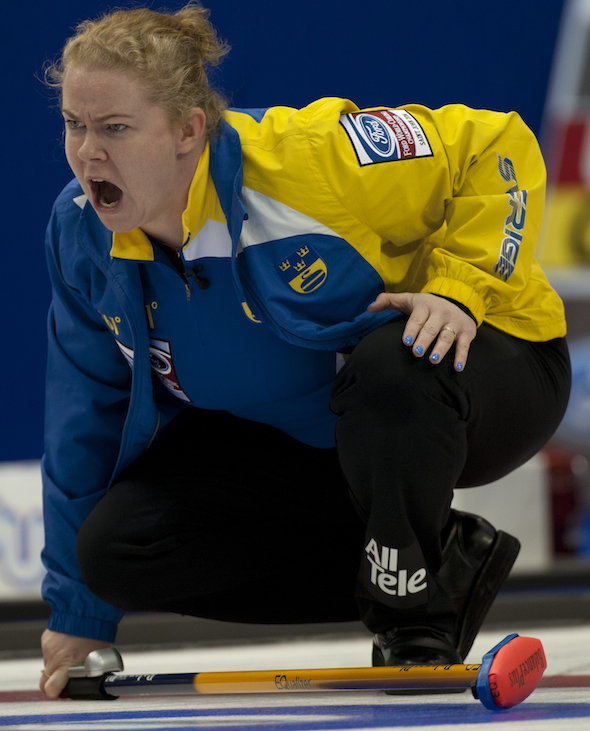 The 38-year-old Sigfridsson, who’s pursuing her first world championship gold medal to along with four silver medals, romped to a 13-4 win over South Korea’s Ji-Sun Kim on Saturday night at Harbour Station in Saint John, N.B. That win, combined with a 10-5 win over the Czech Republic’s Anna Kubešková in the opening draw, left the Swedes alone in first place with a 2-0 record in the 12-team round-robin competition. 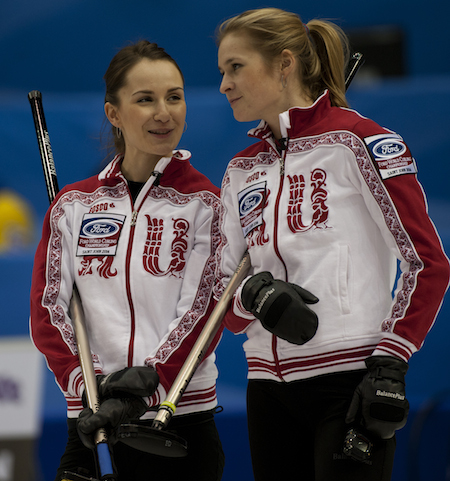 “It was a good day today,” said a smiling Sigfridsson. “We put some effort in studying the rocks for the first two games during our practice (on Friday), and we got a good feel for the ice quite quickly.” Sweden opened the game with a deuce in the first end, and then stole five in the second, and put five more on the scoreboard in the fourth end against the Koreans, who dropped to 0-2. “That’s definitely a better team than what they showed tonight,” said Sigfridsson. “I think they could be one of the best teams here. But they shuffled around a few players and missed some important shots, so that’s why our numbers were so big.” In other evening-draw action, Russia’s Anna Sidorova bounced back from a loss earlier in the day to Canada’s Rachel Homan with a 10-2 thrashing of Latvia’s Evita Regža. The Russians used the hammer to score deuces in the first and fourth ends, and also stole three-enders in the second and fifth ends to drop Latvia to 1-1. “It was the second game for us, so we were more used to playing on this ice, we had more time to get used to it, so that was the key,” said Sidorova. “Also a couple of mistakes for Team Latvia, so we just took our chances and it worked.” The Russians, reigning European champions, missed the playoffs at the Olympics in their home country, despite being fancied by some to make the medal round. “The more difficult thing for me personally was that we all expected that we can fight for medals,” said Sidorova of the Olympics. “When you understand that you (were eliminated) as soon as the round-robin games finished (in Sochi), that was for me the hardest thing. The rest of the time, (we) just watched the games for medals. Even if I cheered for Canada to win, it’s not so fun to see how different people place for medals.” Allison Pottinger of the United States, meanwhile, was a big winner in her 2014 Ford Worlds debut, piling up a 12-5 triumph over China’s Sijia Liu (0-1). The U.S. broke open a tight game by stealing three in the sixth end and one more in the seventh. Handshakes followed when Pottinger drew for three in the ninth end. 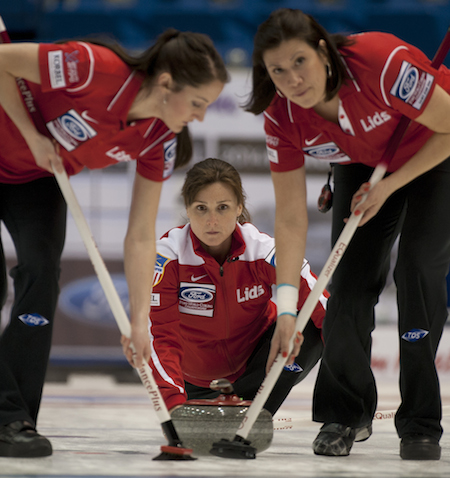 “You know, I think after the last time we came in, Lethbridge (where Pottinger’s team lost its first four games of the round robin at the 2012 Ford Worlds), this just feels so much better to start with a win, kind of start ahead of things, build some momentum, and be able to play some shots and see those peels and things,” said Pottinger. “It makes a big difference, I think.” In the other late game, Switzerland’s Binia Feltscher was a 10-4 winner over Germany’s Imogen Lehmann in the opening game for both teams. The Swiss led all the way and put the win in the bank with four in the ninth end. “The first win in a tournament is always good,” said Feltscher. “I think the good start with two in the first and the steal in the second was important for us. That helped our confidence, and we were able to play a safe game after that.” Canada (1-0), Denmark’s Madeleine Dupont (0-1), Scotland’s Kerrry Barr (0-1) and the Czech Republic (0-1) all had byes in Draw 2. The 2014 Ford Worlds continue on Sunday with draws at 9:30 a.m. (all times Atlantic), 2:30 p.m. and 7:30 p.m. Team Canada is on the ice at 9:30 a.m. against the Czechs and 7:30 p.m. against the Swiss. All draws for the 2014 Ford World Women’s Curling Championship will be televised on TSN/RDS2, the official broadcasting partner of the Season of Champions. Live scoring is available at: www.curling.ca/scoreboard/?e=58 To purchase tickets to the Ford World Women’s Curling Championship, presented by Booster Juice, go to: www.curling.ca/2014worldwomen-en/tickets/ The French version of this story will be available at www.curling.ca/2014worldwomen-fr/ as soon as possible.