Team Canada got off to an ideal start on Saturday at the 2014 Ford World Women’s Curling Championship, presented by Booster Juice. 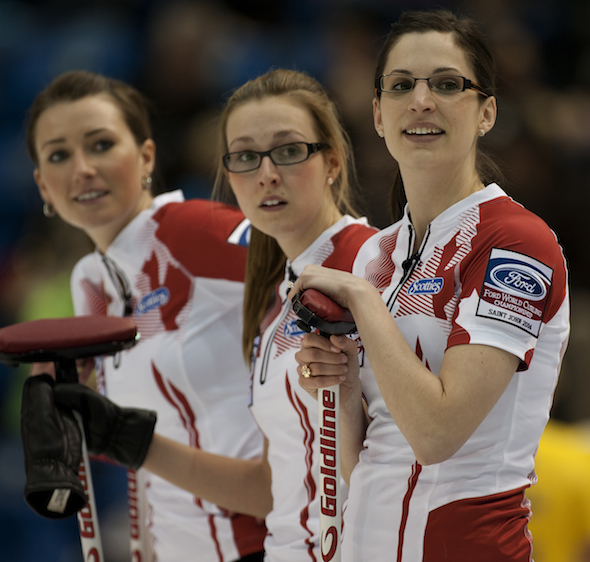 Bagpipers made their traditional march during the opening ceremonies of the 2014 Ford World Women’s Curling Championship. (Photo, CCA/Michael Burns)

Team Canada scored deuces in the fifth and seventh ends, but the Russians — the same lineup that played in the Sochi Olympics — hung tough and took it to the 10th end tied 5-5 after scoring two in the ninth. But in the 10th, Sidorova was heavy with her last-rock draw attempt, allowing Canada to score two without Homan having to throw her last rock. “We were learning the ice and obviously we had a few misses here and there, but both teams did,” said Homan, who made some clutch double-takeouts in the last five ends to snuff out Russian threats. “It was a tough battle the whole way through and we were able to kind of string a few shots together and get out of a couple ends, and get our twos when we needed them. Some big team shots from our team.” Crowd-pleasing shots, too, as Saint John fans embraced the chance to attend their first world championship event since the 1999 Ford Worlds at Harbour Station. “It’s fun to celebrate with the crowd,” said Homan with a smile. “There were tons of people here cheering us on, lots of signs and painted faces, and it was fun to celebrate with them. Glad to get that first win for Canada.” The co-favourite in the 12-team field, Sweden’s Margaretha Sigfridsson, also earned a Draw 1 victory. The Swedes scored four in the seventh end and three more in the ninth to polish off a 10-5 win over Anna Kubešková of the Czech Republic. “That was a good game,” said Sigfridsson, who won silver at the Sochi Olympics after bowing to Canada’s Jennifer Jones in the gold-medal game. “We’re always excited about how the ice will work, and we managed that well. We had a few days off in Sochi before we went home and we had time to re-load and re-focus coming to the Worlds — it’s one of the biggest things you can play.” South Korea’s Ji-Sun Kim, meanwhile, rolled to a stunning 11-8  victory over Denmark’s Madeleine Dupont. The Koreans were down 7-2 after five ends, but came back with four in the sixth end, a steal of three in the seventh and two more in the eighth en route to the win. “Our feeling wasn’t good in this game, we had difficulty reading the ice and with our weight judgement,” said Kim, who finished fourth in the 2012 Ford Worlds in Lethbridge, Alta. “The first, sevond and fifth ends were not good for us. But by the sixth end we fought back against these difficulties.” 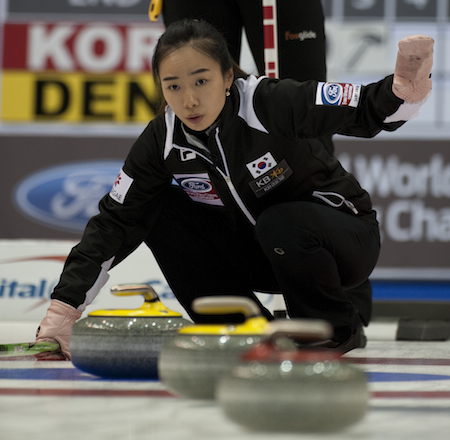 In the other Draw 1 tilt, Latvia’s Evita Regža scored three in the ninth end for an 8-6 win over Scotland’s Kerry Barr. Germany’s Imogen Lehmann, China’s Sijia Liu, Switzerland’s Binia Feltscher and Allison Pottinger of the United States all had byes in the first draw. The 2014 Ford Worlds continue on Saturday with a draw at 7:30 p.m. (all times Atlantic). Team Canada returns to action on Sunday at 9:30 a.m. against the Czechs. All draws for the 2014 Ford World Women’s Curling Championship will be televised on TSN/RDS2, the official broadcasting partner of the Season of Champions. Live scoring is available at: www.curling.ca/scoreboard/?e=58 To purchase tickets to the Ford World Women’s Curling Championship, presented by Booster Juice, go to: www.curling.ca/2014worldwomen-en/tickets/ The French version of this story will be available at www.curling.ca/2014worldwomen-fr/ as soon as possible.