Canada has pulled into a first-place tie with Sweden at the 2014 Ford World Women’s Curling Championship, presented by Booster Juice. 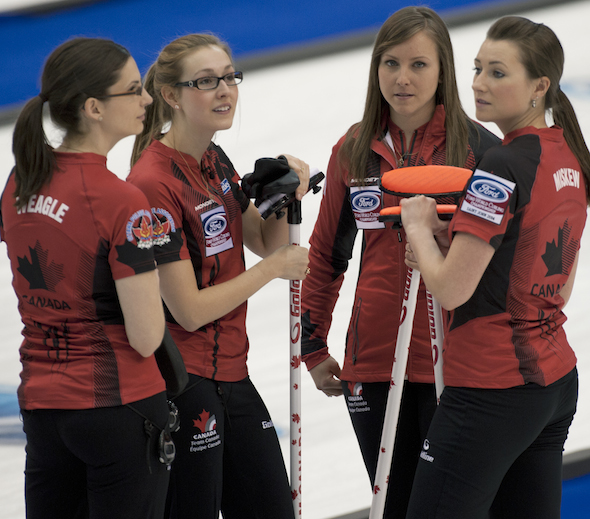 Rachel Homan’s team from Ottawa — vice-skip Emma Miskew, second Alison Kreviazuk, lead Lisa Weagle, alternate Stephanie LeDrew, team coach Earle Homan and national coach Elaine Dagg-Jackson — downed Anna Kubešková of the Czech Republic 8-4  Sunday morning at Harbour Station in Saint John, N.B. With the victory, Canada improved to 2-0, tied for top spot in the 12-team round-robin pool with Margaretha Sigfridsson’s Swedish foursome, which had the bye on Sunday morning. “It felt good out there,” said Miskew. “The other team was playing really well, so that kept us sharp. We were able to take advantage of a couple nice setups by us to get two points. But it was a good game by both teams so we were very happy.” The Canadians used last-rock advantage to put deuces on the board in the second, fourth, seventh and ninth ends — the final deuce the result of a draw to the four-foot by Homan that prompted handshakes from the 0-2 Czechs. “We’re still learning, but every game I feel like we’re going to learn a little bit more about the ice,” said Miskew, whose team has now won 15 straight games after going through the Scotties Tournament of Hearts unbeaten. “Today we learned about a couple of different paths. Every sheet has little things about them that are different from the other sheets, and we’re going to get to know every sheet as best we can. It’s the same as the Scotties; we all feel really good out here. It feels so good to be wearing the Maple Leaf, and the crowds have been so amazing. It really motivates us for every shot.” 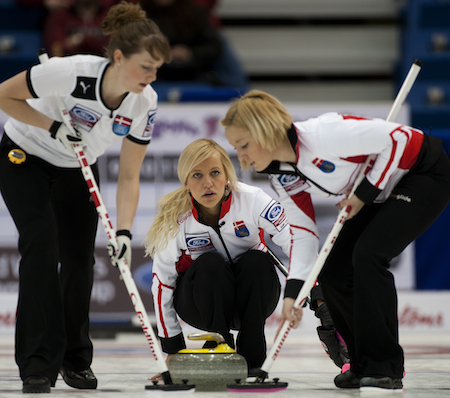 In the other Sunday morning tilt, Denmark’s Madeleine Dupont hit the win column with a 7-5 triumph over Scotland’s Kerry Barr. Dupont took advantage of a pair of Barr misses in the eighth end, drawing for a go-ahead three and never looked back as the Scots dropped to 0-2. It was an important bounceback for the Danes, who struggled in their opening-draw loss Saturday to South Korea when they blew a 7-2 lead after five ends. “When you haven’t played on this kind of ice in a few years, it feels really slippery and greasy and it’s kind of hard to control everything” said Dupont. “But it was more really just nerves yesterday; more like, ‘Oh, God, everything is so new.’ It was better today. We didn’t play much better; it just felt better. “It feels good being in an arena like this, but there are so many things that make you feel a little shaky. So I can’t describe how important it was (to win). It wasn’t like a must-win (in the standings), but in my head, it was a must-win.” Switzerland’s Binia Feltscher (1-0), Allison Pottinger of the U.S. (1-0), Russia’s Anna Sidorova (1-1), South Korea’s Ji-sun Kim (1-1), Latvia’s Evita Regža, China’s Sijia Liu (0-1) and Germany’s Imogen Lehmann (0-1) also had byes in the Sunday morning draw. The 2014 Ford Worlds continue on Sunday with draws at 2:30 p.m. and 7:30 p.m. (all times Atlantic). Team Canada is back on the ice at 7:30 p.m. against the Swiss. All draws for the 2014 Ford World Women’s Curling Championship will be televised on TSN/RDS2, the official broadcasting partner of the Season of Champions. Live scoring is available at: www.curling.ca/scoreboard/?e=58 To purchase tickets to the Ford World Women’s Curling Championship, presented by Booster Juice, go to: www.curling.ca/2014worldwomen-en/tickets/ The French version of this story will be available at www.curling.ca/2014worldwomen-fr/ as soon as possible. Follow @ccacurling on Twitter (#FWWCC) for updates during the 2014 Ford Worlds.