Canada fights off Germany for clutch win at 2014 Ford Worlds

It had been 20 games since Team Canada skip Rachel Homan needed to throw her last shot in the last end of a curling game. 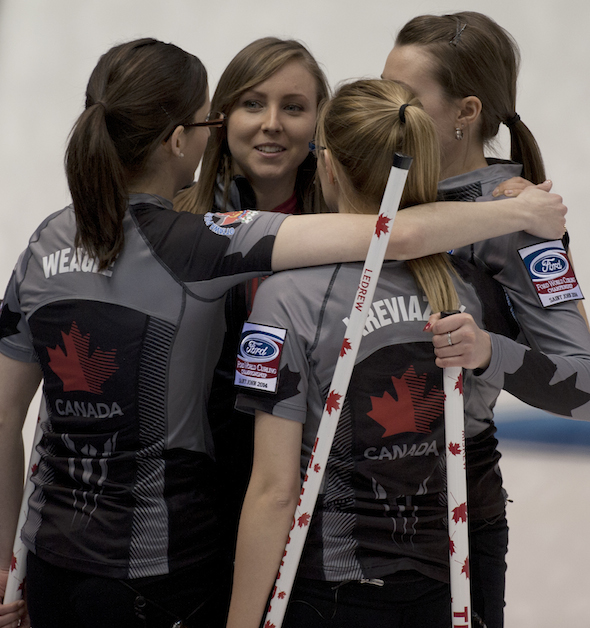 That streak came to an end on Wednesday morning at Harbour Station, but it was still a satisfying result for Homan’s Canadian team from Ottawa — third Emma Miskew, second Alison Kreviazuk, lead Lisa Weagle, alternate Stephanie LeDrew, team coach Earle Morris and national coach Elaine Dagg-Jackson. Canada stole a single point in the ninth end and two more in the 10th for a stunning 7-5 win over Germany’s Imogen Lehmann to remain tied for first place in the 12-team round-robin standings. Homan made an angle freeze to a Canadian rock covering the button, and Lehmann was wide with her attempted tap to leave both Canadian counters for the victory. “It was a great 10th end by our team,” said Homan. “Ali threw one to the pin, and they swept both of my draws to a perfect spot. And I threw my last shot! I know you guys were looking for that. It was a battle by both teams; they made some great shots and we had some tough misses, but we’re moving on and preparing for our next game.” 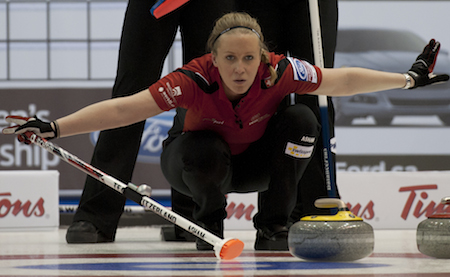 Canada struggled early against an inspired German team that entered with a 1-6 record, but caught a break in the ninth when Lehmann missed on her double-takeout attempt to result in a game-tying Canadian steal. “I think it takes a lot of perseverance to win a game like that, that’s for sure,” said Kreviazuk. “And you have to find a way to keep your cool, and sometimes out there it’s tough to do. But I think we all did a pretty good job despite what was going out there. It feels great knowing that we’ve been in that situation before and we can do it again.” Canada is tied with Switzerland’s Binia Feltscher at 7-1, just ahead of Sweden’s Margaretha Sigfridsson (6-1), who had a bye on Wednesday morning. Switzerland kept pace with the Canadians by romping to a 10-5 win over Scotland’s Kerry Barr, who dropped to 2-6 with the loss, her fourth straight. 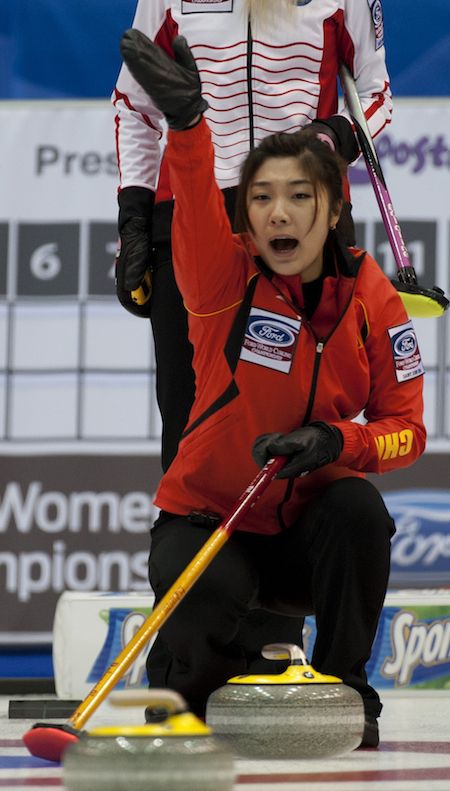 China’s Sijia Liu, meanwhile, kept pace with the leaders, drubbing Denmark’s Madeleine Dupont 9-3. The Chinese have won six straight after going 0-2 to open the Ford Worlds, and were never really threatened by the 1-7 Danes. “We know the ice better and better, and the team’s playing well,” said Liu. “I’m not thinking about the results, I’m just trying to make sure we play better in the next game.” In the other morning game, Allison Pottinger of the United States picked up a crucial victory, going to an extra end to beat Anna Kubešková of the Czech Republic 7-6. Pottinger didn’t need to throw her last rock in the 11th after Kubešková was heavy with her last-roc draw attempt. The U.S. improved to 4-4 with the win, while the Czechs dipped to 1-7. “I think it was good for us; we know we need to win out from here on in to get ourselves in the mix, so it was a big win,” said Pottinger. “We can’t afford to look around at other games. We just have to focus on the sheet we’re on, play our game and win.” Besides the Swedes, South Korea’s Ji-sun Kim (5-2), Russia’s Anna Sidorova (5-2) and Latvia’s Evita Regźa (1-6) had byes. The 2014 Ford Worlds continue on Wednesday, with draws scheduled for 2:30 p.m. and 7:30 p.m. (all times Atlantic). All Canadian games and the playoff rounds for the 2014 Ford World Women’s Curling Championship will be televised on TSN/RDS/RDS2, the official broadcasting partner of the Season of Champions. Live scoring is available at: www.curling.ca/scoreboard/?e=58 To purchase tickets to the Ford World Women’s Curling Championship, presented by Booster Juice, go to: www.curling.ca/2014worldwomen-en/tickets/ The French version of this story will be available at www.curling.ca/2014worldwomen-fr/ as soon as possible. Follow @ccacurling on Twitter (#FWWCC) for updates during the 2014 Ford Worlds.