The 2014 Canadian Senior Men’s and Women’s Curling Championships officially get underway Saturday in Yellowknife, Northwest Territories — the first time the city and the territory have hosted a national curling championship. 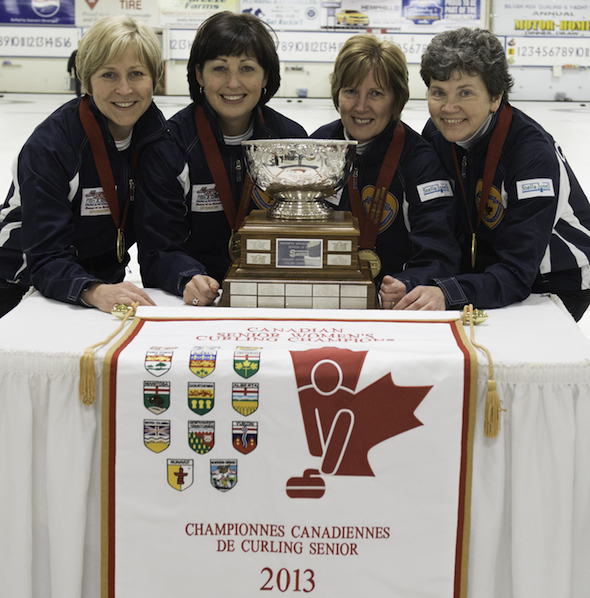 Twelve men’s and 12 women’s teams will compete in the Canadian Seniors, which takes place March 22-29 at the Yellowknife Curling Centre and Yellowknife Community Arena. At the conclusion of the round robin on March 27, the first-place teams advance to their respective finals, while the second- and third-place teams meet in semifinals on March 28 to determine the other finalists. Both the men’s and women’s finals are scheduled for 2 p.m. MT on Saturday, March 29, at the Community Arena. Prior to the start of the event though, four men’s and three women’s teams will play a double-knockout qualifying round on Thursday and Friday to determine which two of each gender advance to the main draw. In men’s, Newfoundland/Labrador, Northern Ontario, Yukon and Nunavut will attempt to qualify while in women’s, only Ontario, Prince Edward Island and Nunavut will do the same, since Yukon is not represented this year. The four lowest-ranked provinces/territories were determined by last year’s results, with host Northwest Territories receiving entries into the main draw for both of its teams. Among the competing men’s skips this year are Alberta’s Mark Johnson, the 2010 Canadian and 2011 World Seniors champion; Manitoba’s 2011 Canadian champion and 2012 World Seniors silver-medallist Kelly Robertson; along with Brier veterans Ted MacFadyen of P.E.I, Nova Scotia’s Alan O’Leary, Robbie Gordon of Northern Ontario, Lorne Henderson of Newfoundland/Labrador and Darrell McKee of Saskatchewan. On the women’s side, defending champion skip Colleen Pinkney of Nova Scotia, who also won the 2009 Canadian and 2010 World Seniors crowns, is back, joined by New Brunswick’s Heidi Hanlon, the 2011 Canadian and 2012 World Seniors gold medallist, Scotties veteran and 2012 Canadian Seniors runner-up Cathy Cunningham of Newfoundland/Labrador and two former Olympians: 1988 gold-medallist Penny Shantz of British Columbia and 2006 bronze-medallist Glenys Bakker of Alberta. In addition, Ontario’s two-time Canadian and World Women’s champion (1986, 1996) Marilyn C. Bodogh will be competing in the pre-qualifying round hoping to make the main draw. The Canadian Senior Men’s Championship began in 1965 in Port Arthur, Ont. Since then, Manitoba has won a leading 11 titles. The Canadian Senior Women’s Championship began in 1973 in Ottawa. Ontario has won a leading 10 crowns. The championships were conducted separately until being combined in 1985 in Yorkton, Sask. The winners of the 2014 Canadian Seniors will represent Canada at the 2015 World Senior Curling Championships, at a site and date to be announced by the World Curling Federation. Last year’s Canadian champions, skipped by Pinkney and Wayne Tallon of Fredericton, N.B., are competing in this year’s World Seniors, April 23-30 at Dumfries, Scotland. Since the World Seniors began in 2002, Canada has won eight men’s and nine women’s titles. Draw results for the 2014 Canadian Seniors will be instantly available at www.curling.ca. For information about the event, including team rosters and event schedules, visit www.curling.ca/2014seniors-en.